Asus showcased the Zenfone 5 Lite, Zenfone 5 and the Zenfone 5Z at MWC 2018. However, alongside the three smartphones, the company was expected to display the Zenfone 5 Max as well. While the company didn’t announce the smartphone on-stage, it did reveal details of the smartphone via a press release. But now it seems that there is another variant of the handset in the works, or possibly even a a new device altogether. A new device with model number ASUS_X00QD has appeared on Geekbench with upgraded processor and bumped up RAM.

As per the Geekbench listing, the Asus device is powered by the Qualcomm Snapdragon 660 SoC with 4GB RAM. It is listed as running Android 8.0 Oreo and scores 1518 in single-core benchmark and 5386 in multi-core tests. No other details of the device has been revealed by the benchmark listing, but the smartphone is rumoured to feature a 5.7-inch Full HD+ screen with a taller 18:9 aspect ratio. It might come with 64GB internal storage and could feature an iPhone X-like notch as well, which was seen on the Asus Zenfone 5 and Zenfone 5Z smartphones. The mobile phone is also speculated to come with a vertically stacked dual-camera setup and a rear mounted fingerprint reader. Leaked renders suggest that the phone could feature a USB Type-C port along with a 3.5mm audio jack. 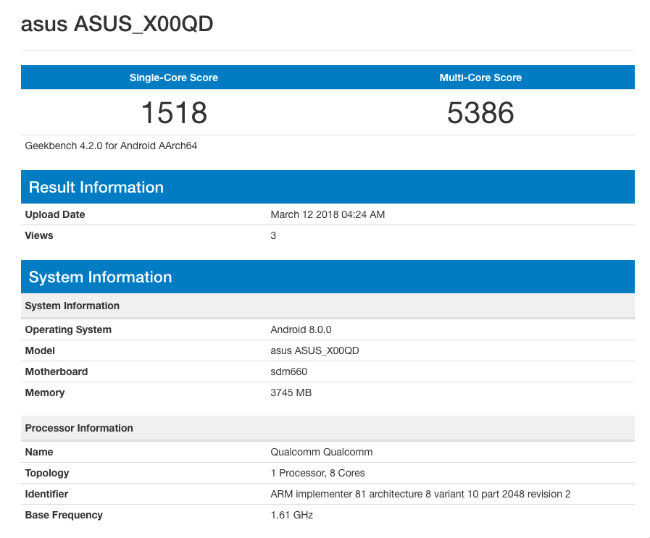 Details of the Asus Zenfone 5 Max (M1) revealed by the company states that phone features a thin-bezel design with an 18:9 display aspect ratio and it doesn’t sport a notch on its display. The smartphone sports a 5.5-inch HD+ IPS display with a 1440 x 720p resolution and is powered by either Snapdragon’s 425 or 430 SoC with up to 3GB RAM and 32GB internal storage.

In the camera department, the device is equipped with a 13MP+8MP dual-rear camera setup with f/2.0 aperture and PDAF support. On the front, it comes with an 8MP camera with f/2.2 aperture lens and support for face unlock as well. The device runs on Android 8.0 Oreo with Zen UI 5.0, and is backed by a 4000mAh battery which the company claims can deliver up to 41-days of 4G standby, up to 36 hours of 3G talk time, up to 23 hours of web browsing on Wi-Fi, up to 16 hours of video playback. Asus also claims that users can double the battery life of the phone via the company's PowerMaster power management app.