Over the years, Asus has become synonymous with hardcore gaming. It has launched high-performance computers under Republic of Gamers (ROG) brand and now shifted its focus to introduce industry-leading technology in smartphones. The tech giant launched the much-awaited ROG Phone at Computex 2018 in June and today, CEO Jerry Shen has confirmed that the gaming smartphone will make its way to India later this year.

While talking to Digit on the sidelines of the Asus Zenfone 5Z launch, Shen confirmed that the ‘game-changing’ ROG Phone will launch in India in the third quarter of this year. “Definitely, yes,” he said when asked if he sees a market for gaming phones in the country. “For sure, we will launch the ROG phone here in India. I cannot tell you the exact date, but it will arrive in Q3. It is already Q3, so we have three months to do so,” he said.

“The consumers here are not like the ones in the US. Indian consumers are reasonable and care about the value and the features. Definitely, ROG will be priced higher than the Zenfone 5Z. The combination of 8GB and 512GB that will be the key to its success. It's better than PC. On top of the specs, we have Optiflex which is our technology that speeds up the phone. We also have a lot of accessories and technology to prevent CPU throttle. Expect to see more and more Asus technology in it. I will ask my team to bring this device to India as soon as possible,” the Asus CEO told Digit.

The ROG smartphone comes equipped with the world’s first 3D vapour-chamber cooling system in a smartphone known as GameCool. It also features AirTrigger touch sensors, an AMOLED display along with HDR visuals and sports a unique gaming-centric design. To top it off, the ROG phone packs a 90Hz refresh rate and a 1ms response time which will ensure a seamless gaming experience.The device is powered by the world’s fastest 2.96Ghz octa-core Qualcomm Snapdragon 845 processor with the Qualcomm Adreno 630 GPU, specially optimised for gaming. 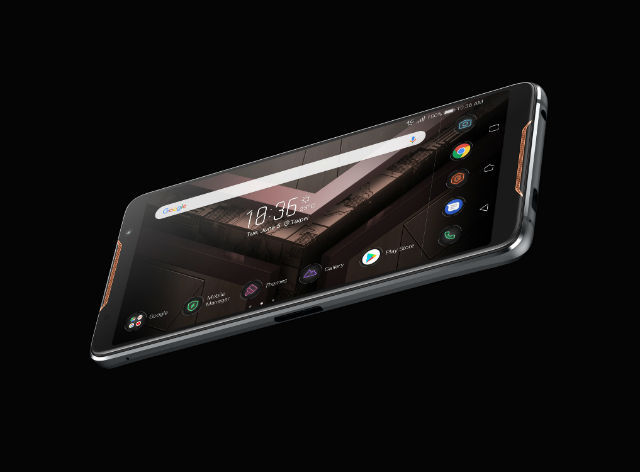 The Asus ROG 6-inch smartphone has been designed specifically for high-performance mobile gaming. With pure ROG gaming DNA at its core and powered by the speed-binned 2.96GHz octa-core Qualcomm Snapdragon 845 SoC and gaming-optimised Qualcomm Adreno 630 GPU, the ROG Phone aims to take on its rivals the Razer Phone and Xiaomi’s Black Shark. The phone comes with up to 8GB of RAM and up to 512GB of onboard ROM storage.

The cherry on the cake is the optimised layout for landscape-mode gaming. There's an additional side-mounted custom USB-C connector that supports direct charging, HDMI output, gigabit LAN and headphones. And when the AeroActive Cooler is deployed, it provides a side-mounted USB-C port and 3.5mm headphone jack for unhindered gameplay. The side connector is also used for the exclusive expansion modules, including the Mobile Desktop Dock and TwinView Dock.

The ROG Phone has 4,000mAh battery and power adapter that supports Asus HyperCharge, a direct-charge technology that delivers more power (up to 20W) for shorter charge times. There are two ultra-powerful front-facing stereo speakers in the ROG Phone with smart amplifiers to maximise volume and minimise distortion.