The Asus ROG Phone III was spotted on TENAA, giving us the first look at the upcoming gaming phone.

The next ROG Phone from Asus has been popping up in different places indicating its imminent launch in the market. The phone’s internal hardware was leaked via a Geekbench listing previously, and now the phone’s specs have surfaced on TENAA and AnTuTu, along with a few photos of the phone’s design.

The TENAA listing states states the gaming phone will pack a smaller battery this time. 5800mAh as compared to the 6000mAh behemoth in the predecessor. It shouldn’t make a big difference, owing to the power efficiency gains Qualcomm has claimed in this year’s flagship Snapdragon 865. We also expect the phone to now come with an OLED display, with a higher 144Hz refresh rate. What’s confirmed is that the phone will continue with a FullHD+ resolution with 6.59-inch footprint. It will also be 9.85mm thick.

The images leaked on TENAA also shows a triple camera setup at the back, with the physical buttons on one side. This indicates the ROG Phone III will stick to the AirTriggers, which are pressure sensitive buttons on the edges for gaming. We couldn’t spot the extra USB-C port on the side in the images though. 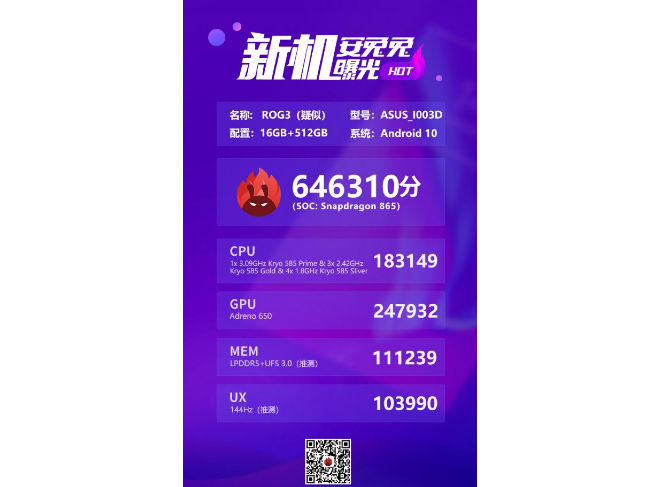 Zeroing in on the hardware inside, the AnTuTu listing reveals a score of 646310, which is far higher than what other Snapdragon 865-powered devices have scored on the benchmark test. The reason for that is an overclocked prime core in the Snapdragon 865, hinting at a freshly tuned processor from Qualcomm.

AnTuTu listing reveals the Kryo 585 prime core is overclocked to 3.09GHz, far higher than the 2.84GHz limit on other phones. The other two core clusters consisting of Kryo 585 Gold and Silver cores are clocked at 2.42GHz and 1.8GHz respectively. The Adreno 650 GPU seems to be the same.

Asus will also use the latest RAM and storage modules in the phone, going with LPDDR5 and UFS 3.0, which should further improve performance. The amount of RAM and storage is also interesting. Asus will offer a 16GB+512GB variant of the phone. The 144Hz refresh rate was also confirmed by the AnTuTu listing.

Asus will also find a new way to cool the overclocked prime core, and we are speculating it to be a combination of vapour chamber liquid cooling and an airflow system.

The Asus ROG Phone II was announced last year in July, and going by the slew of certifications the phone is picking up, it may be on track to launch in July this year as well.