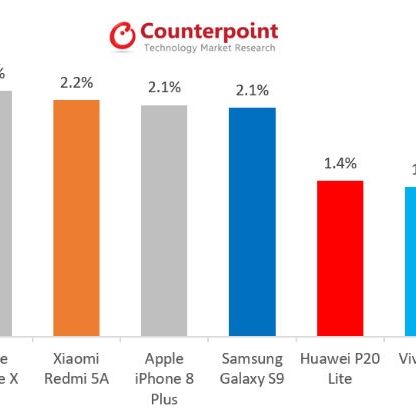 Beating Samsung, Apple has regained the top spot in the list of best selling smartphone companies for the month of May globally. As per the report by market research firm Counterpoint Research said, people preferred iPhone 8 over iPhone X with the former registering 2.4 percent of the total global smartphone model sales market share. Samsung Galaxy S9+ followed with the same market share but saw weak sales in Europe. iPhone X was placed on the third spot with 2.3 percent market share.

“Strong promotions (“How to shoot on iPhone”) running up to the football (soccer) World Cup helped the tech giant to trigger buyer interest in Europe and other markets. iPhone 8 sales were steady in the US postpaid channels. Samsung Galaxy S9 sales were slightly weak month-on-month in Europe, however, were steady in the US. Noteworthy is that Samsung Galaxy S9+ was the best selling smartphone in April 2018,” Pavel Naiya, Senior Analyst with Counterpoint Technology Market Research, wrote in a blog post.

Xiaomi gained momentum on its home turf and continued its good performance in India. The company saw strong performances from its Xiaomi 5A and Xiaomi 5 Plus series and had good penetration in the mid-to-affordable premium market in China. Xiaomi also increased its offline presence with its new Mi Home and Mi Preferred Partner Retail in India. The move helped the company to increase its offline sales from 30 percent in April to 35 percent in May in the country. Xiaomi remains the leader in online channels in India.

While talking about other Chinese players, Huawei grew in its home market and India with P20 and P20 Lite smartphones. Huawei’s P20 series combined (P20, P20 Pro and P20 Lite) share (2.6 percent) was amongst the top sellers, though only the P20 Lite were listed in the Top 10 list as an individual product, the research company said. Oppo A83 helped the company and the model to maintain its good sales momentum.