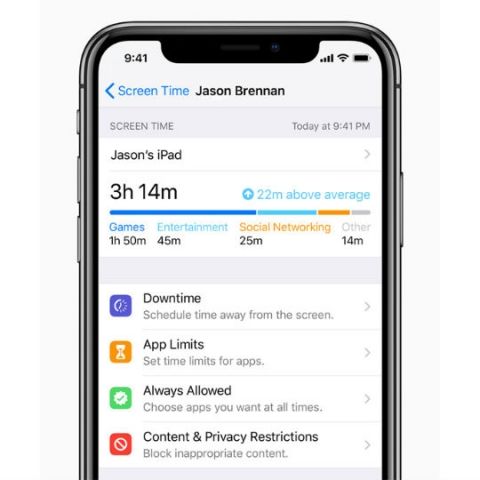 At the Worldwide Developers Conference that took place yesterday in California, Apple highlighted details of its new initiative that would help iOS users break free from their device distractions more easily. Packed into iOS 12 as inbuilt tools, the initiative, previously revealed to us that it would be called 'Digital Health', basically works by fine-tuning the way users see notifications and use their apps.

First among these tools is the improved Do Not Disturb feature. A new ‘Bedtime Mode’, when activated, shows a condensed and darkened lock screen during the user-defined night hours instead of a barrage of notifications. This should prevent distractions while simply checking the time. The missed notifications reappear when the phone is unlocked outside bedtime hours and the notification center is pulled open.

The second feature Apple introduced in iOS 12 is called Screen Time. It’s a feature found in the Settings screen and consists of a bunch of tools to help the user monitor how much time they spend on the phone. Weekly Activity Summary, as the name suggests, is a summarised weekly report in Screen Time that shows how time was spent by the user in the past week on the phone. It’s a rather extensive report that shows which app was used at which hours and at what locations, letting users understand exactly how they use their phones. Apple then offers a solution for users who believe they’re spending too much time on a particular activity or app. App Limits is an option within Screen Time that lets users set daily time limits for categories of apps or individual apps. When defined and activated, App Limits will notify users when their daily time limit on a certain app or category of apps is over. The time limit, synced across iOS devices, resets after the day is over. For example, a user could set a limit for social networking to be more productive, and a daily time limit for all apps enabling social networking like Twitter and Facebook will be enforced across the iOS devices the user uses.

Allowances is a similar tool in iOS 12 that lets parents impose additional restrictions on their children’s iPhone or iPad usage. Whitelisting of apps ensures essential apps like Phone and Contacts aren’t affected by the restrictions.

Call it a coincidence or a lack of new ideas, but it seems Apple has jumped on the digital well-being bandwagon right after Google showcased their plans for it. Google first spoke about reducing mobile phone distractions as early as 2012. This year though, Google talked about introducing additions to Android and Android apps (like YouTube) that would help users break free from prolonged use of apps. It also talked about a new dashboard in Android P that would help users monitor their app usage and restrict it if they feel like. Google also talked about Shush and Wind Down, the new ways of using Do Not Disturb on Android to help cut down on frequent notifications.