Amitabh Bachchan posted a picture of him and OnePlus CEO, Pete Lau holding the two phones. However, the tweet was quickly taken down and replaced with a selfie he took with Lau, which is presumably taken with the OnePlus 6. 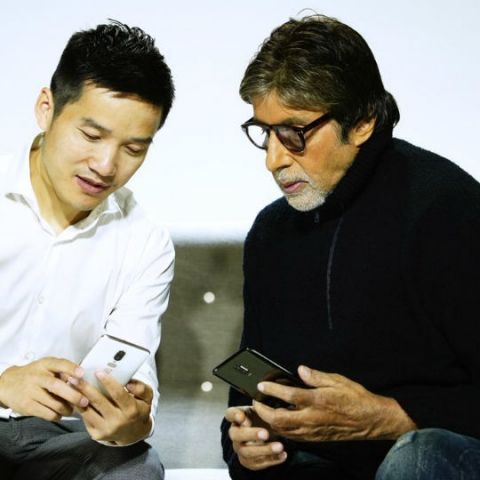 Actor, Amitabh Bachchan may have accidentally revealed two colour variants of the OnePlus 6. The actor tweeted out a couple of pictures of him with OnePlus CEO Pete Lau holding what appears to be Black and White versions of the phone. However, it seems like he noticed it as he quickly took down the post and replaced it with a selfie he took with Lau, which is presumably taken with the OnePlus 6. However, a cached version of the page can still be viewed here. 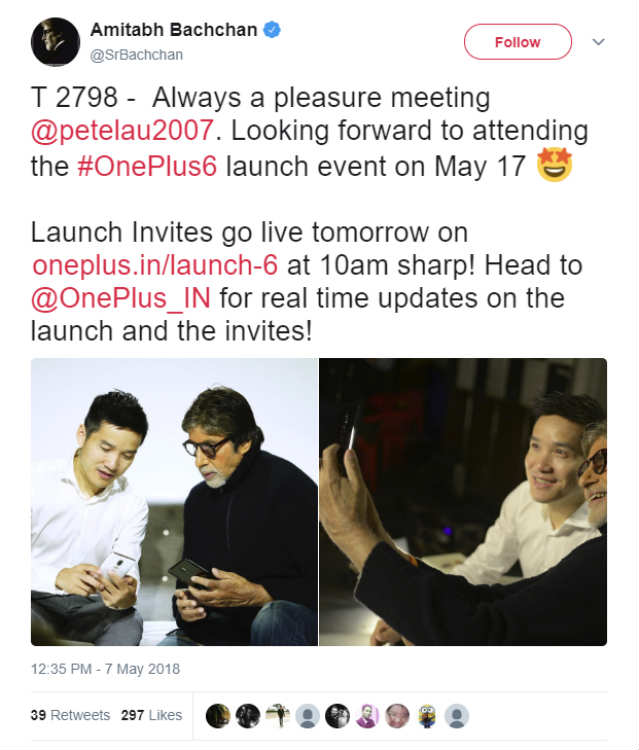 “Always a pleasure meeting @petelau2007. Looking forward to attending the #OnePlus6 launch event on May 17,” the tweet states. So it seems like Amitabh Bachchan would be one of the attendees for the launch of the smartphone on May 17. To recall, OnePlus is scheduled to globally unveil the smartphone on May 16, followed by the Indian launch a day later. Those interested can purchase an invite for the event. Tickets for the same are already available for purchase. Those attending the event will get some goodies from the company like a OnePlus Tote bag, baseball cap, a OnePlus Marvel Avengers limited edition Shirt, and more. Prime subscribers will get early access to the sale of the smartphone ahead of time. They will be able to purchase the smartphone at 12PM on May 21. The company will also be hosting special pop-events around the globe including eight cities on India. The events in India will be held in Bengaluru, Delhi, Mumbai, Pune, Chennai, Hyderabad, Kolkata and Ahmedabad. During these events, customers will not only be able to experience the smartphones, but also get a chance to purchase the devices. The event will take place between 3:30PM and 8MP on May 21, and between 11AM and 7MP on May 22.

OnePlus has been teasing specific features of the OnePlus 6 for quite a while now. These features include the inclusion of a heart rate sensor, water resistance, slow motion recording and a new focusing feature for the alert slider. The company has also confirmed some of the features of the phone. This includes the addition of a notch on the display as well as a Qualcomm Snapdragon 845 SoC. The OnePlus 6 will also come with up to 8GB of RAM and 256GB of storage. The device popped up on TENAA recently and as per the listing, the phone may feature a 6.28-inch Full HD+ display. It is also tipped to feature a dual-rear camera setup with 12MP+16MP cameras, and a 16MP camera at the front.