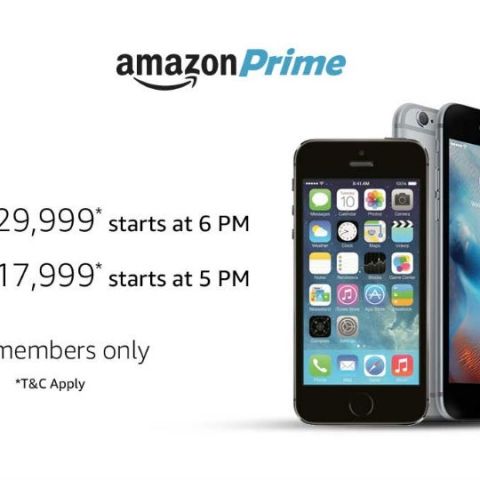 The iPhone is still one of the most expensive smartphone available in the market but if you have been eyeing one, now is your chance to get one. Amazon will be offering huge discounts on iPhone 6s and the iPhone 5s today in the evening to its Amazon Prime members. The iPhone 6s, priced for which start around 40K will be sold for Rs. 29,999 and onwards and the iPhone 5s will be sold for Rs. 17,999 onwards. The iPhone 5s deal starts 5PM onwards and the iPhone 6s deal starts 6PM onwards. Amazon will be selling the phones under its lightning deals, which means a limited number of devices will be on sale. Also, the sale is open to both Amazon Prime paid and trial customers.

If you are looking to upgrade or buy a new iPhone and don’t have the budget to invest 60K in the upcoming iPhone 7, then the iPhone 6s remains a very good choice. The iPhone 6s is still one of the best smartphones in the market offering lag-free performance and a superb camera quality. This last year’s flagship also offers a 3D touch display. It is a  pressure sensitive display and offers functionalities like peek and preview into an app without switching to it. It is also one of the best displays in the business as the 4.7-inch retina display offers good viewing angles and lifelike colours. Having said that, battery life is still average at best.

As for the iPhone 5s, it is meant for first time iPhone buyers, people who want to get into Apple’s iOS ecosystem. The iPhone 5s offers one of the best industrial designs and is one of the most compact smartphones available today. With just a 4-inch display, people who like to use their smartphone with one hand should really consider this phone. It is a little less powerful compared to the iPhone 6s, but the dual-core Apple A7 powered smartphone is still a very capable device. It has a commendable 8MP rear camera and is upgradable to the latest iOS 10.

Besides these, a lot of new smartphones, including the Xiaomi Redmi 3 Note, Moto G4 Plus and the le Max 2 are available on discounted prices.

Buy Samsung Galaxy On5 pro at Rs 7990 from Amazon

Buy Samsung Galaxy On7 pro at Rs 7990 from Amazon