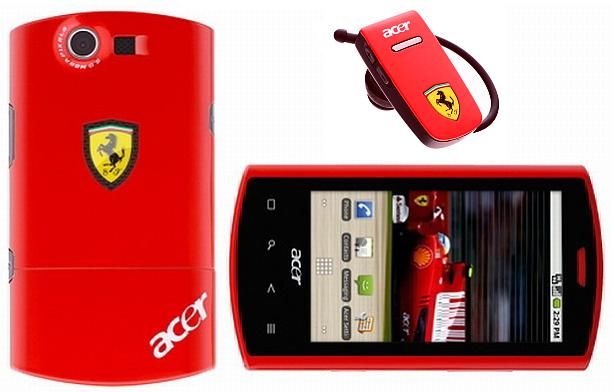 Acer and Qualcomm have announced the official release of their Android 2.1 3G HSDPA phone in India, the Acer Liquid E Ferrari Special Edition, priced at a whopping Rs. 34,999. Acer has also announced a special introductory price of Rs. 29,999 however, which will run across the festive season. The phone will initially launch exclusively with Chroma stores, before becoming available through Acer’s other retail channels. It comes with a 8GB microSD card bundled.

The phone was launched internationally in August (it was supposed to release in July) and is a Ferrari branded version of the original Liquid E (check out our review here), which was launched back in February internationally, and for Rs. 24,900 in April in India. Featuring the Ferrari logo and colours, the phone is apparently modelled after the Ferrari Scuderia, and has many racy design touches incorporated, such as a speaker that resembles an air intake. Users will also get special Ferrari themes, wallpapers, videos, and ringtones, as well as automatic entry to race car manufacturer’s Facebook, YouTube, and Twitter groups. It will also come with a Ferrari branded Bluetooth headset, which features noise suppression and echo cancellation technologies.

The phone features the exact same hardware as the Liquid E, including the underclocked Qualcomm QSD8250 Snapdragon processor, which runs at 768MHz instead of 1GHz, presumably to extend the battery life. The current manufacturer rated 5 hours of talk time is not too astounding though. It could also be that the expensive, carbon fibre body doesn’t really help the phone dissipate heat well enough. This is something that has puzzled potential buyers of the device endlessly, wondering why Acer would choose to maim itself in front of the 1GHz smartphone competition, many of which are similarly priced, if not cheaper, The phone will apparently receive a Froyo update in the 4th quarter of the year, and that’s when you will enjoy Android 2.2’s many performance and other benefits, including full Flash support. Currently, the Android 2.1 OS onboard features Acer’s Shell customization, and has access to the Android Market.

In related news, Acer seems to have another Liquid phone up its sleeve, what might be the Acer Liquid Metal. Perhaps realizing their underclocked CPU is not going to impress smartphone aficionados, Acer might have gone with metal to allow for a 1GHz processor. The rumoured processor is a Qualcomm 800MHz MSM7230-1 chip however, which is based on Qualcomm’s newer Scorpion platform, and will probably perform much better, both in terms of raw speed and battery efficiency. Other rumoured specifications include Android 2.2 Froyo with Acer’s Shell 4.0 UI, 512MB RAM and ROM, a 5MP camera with LED flash, Bluetooth 3.0, Dolby mobile audio technology, and a slightly larger 3.6-inch screen that can display 16M colours. Check out some pictures of the Liquid Metal below, after the specifications of the Acer Liquid E Ferrari Special Edition.