The Acer Predator 21 X gaming laptop is priced at a whopping $8,999 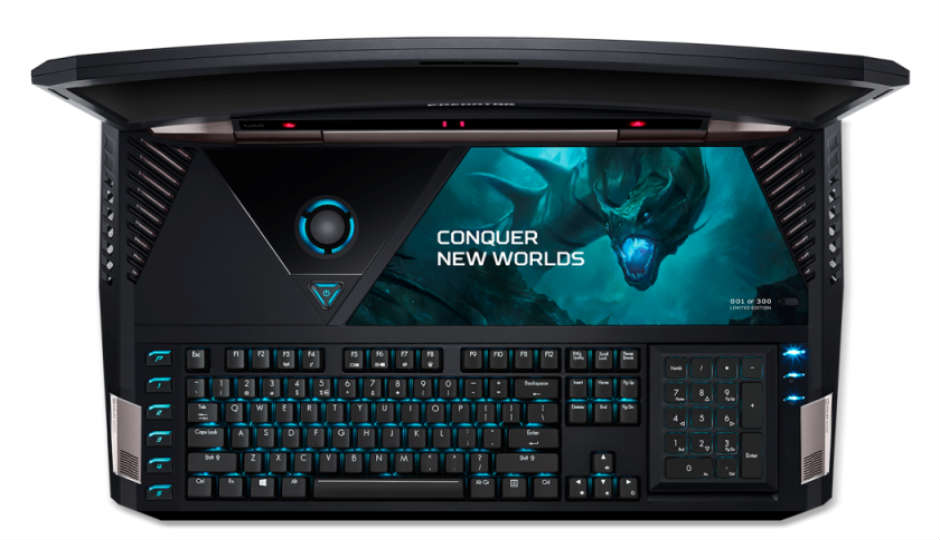 The Acer Predator 21 X gaming laptop is priced at a whopping $8,999

If you were looking for the ultimate gaming laptop you may want to take a look at the Acer Predator 21 X. The laptop will be made to order for customers starting February 2017. The Predator 21 X was first unveiled at IFA 2016 but at the time the specifications and price of the device were not known. Kicking things off with the specifications of the Predator 21 X, it has a 21-inch curved IPS display with a 2560 x 1080 resolution with a 120Hz refresh rate. The curved screen also features NVIDIA G-SYNC technology. The display also boasts of eye-tracking technology from Tobii, a technology we have seen in action in the MSI GT72VR 6RE Dominator Pro Tobii.

The Predator 21 X sports two GeForce GTX 1080 X graphics cards (Nvidia’s SLI), a seventh-generation Intel Core i7 processor, up to 64GB of RAM, support for up to four 512GB solid state drives, of which two drives can also be NVMe PCIe SSDs. The standard storage configuration on the Predator 21 X will be 2TB.

Taking care of performance and dissipating excess heat effectively, the Predator 21 X also features a cooling architecture consisting of 5 system fans (including 3 ultra-thin AeroBlade metal fans) and 9 heat pipes. It also includes Acer DustDefender, which removes dust build-up and improves heat dissipation, and Acer’s CoolBoost app, that can be used to adjust the fans’ airflow to deliver extra cooling performance during heavy use.

In case you were wondering the Predator 21 X features a full-sized Cherry MX Brown switches mechanical keyboard, with individually programmable backlit keys, offering 16.7 million colour options. Gamers can swap out the black W, A, S and D keys with teal ones, using the included accessory kit. The numeric keypad can be flipped over and turned into a Precision Touchpad.

Coming to the sound output from the Predator 21 X, the laptop features a 3-way (tweeter, midrange, woofer) audio design and is powered by 4 speakers (2 tweeters, 2 midrange) and 2 subwoofers.

The laptop comes with the Preloaded Acer PredatorSense software allows users to control and customize the whole gaming experience from one central interface, including overclocking, lighting and fan control. In addition, the included Xsplit Gamecaster software makes it easy for gamers to record and edit videos and live streaming on Twitch and Youtube channels.

Located just above the keyboard on the right side is a metal maintenance panel which provides access to the RAM modules and one 2.5-inch hard drive. The notebook ships with a blue dragon graphic on the panel, or it can be customized with a combination of graphics, nation flags and name engravings. In addition, the first 300 notebooks will include a limited edition series number on the panel.

For safe transport and storage, each Predator 21 X ships with a custom ultra-durable hard-shell carrying case which securely stores the notebook and accessories.

In case you were wondering, it weighs a whopping 17.6 pounds which is nearly 8kgs.