Sony India today showed off its efforts with the next generation hybrid Ultrabook, the Vaio Duo 11. This device can switch between being a tablet and being a full-fledged ultrabook. 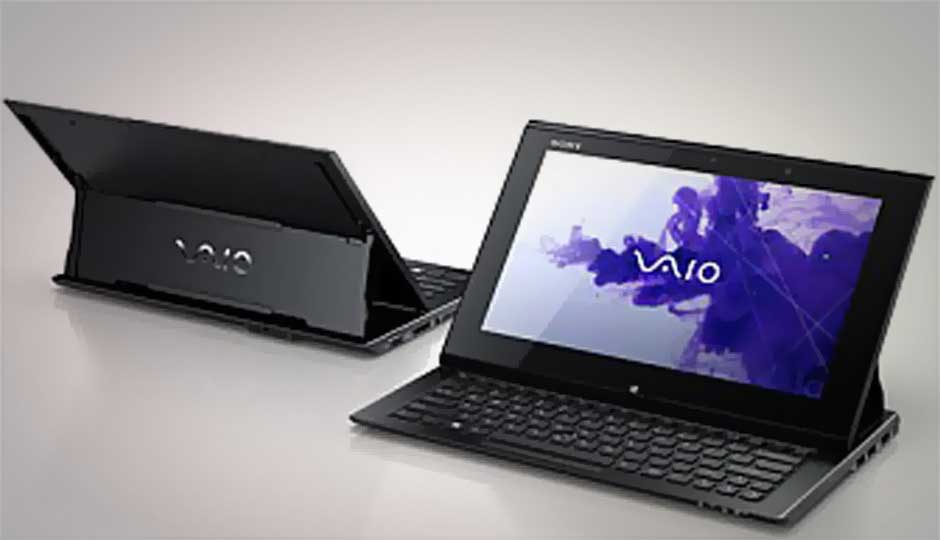 Sony India today showed off its efforts with the next generation hybrid Ultrabook, the Vaio Duo 11. This device can switch between being a tablet and being a full-fledged ultrabook.

The Sony Vaio Duo 11 has an 11.6-inch Full HD touch panel. The Surf Slider design allows you to switch between tablet and ultrabook mode by just sliding the display forwards and up or back and down. The hybrid device features the Opti-Contrast panel which is slightly different from a conventional touchscreen panel – the touch panel and the LCD are joined together with glue, as compared to the conventional panel that has an air gap between the LCD and the touch panel layer.

The Vaio Duo 11 comes with a variety of connectivity options as well – two USB 3.0 ports, one USB 2.0 port, Ethernet, memory card slot and a full HDMI port. One of the USB 3.0 ports also doubles up as the Sleep Charge port, which lets you charge any connected phone even while the Duo 11 may be in sleep mode or completely shut down.

Sony’s mobile and tablet technologies called the xLoud and Clear Phase are also implemented on the Vaio Duo 11. Dolby Theater v4 makes an appearance as well. Sony will bundle the device with noise cancelling earphones. Incidentally, unlike other noise cancelling earphones, they do not have any integrated battery, but use the battery from the Duo 11 itself. Meaning, if we use these earphones with any other device, they will work as basic earphones without the noise-cancelling feature.

Just to run you through the specs on the Vaio Duo 11, an Intel Core i5-3317U processor will power it. This is the same one clocked at 1.7GHz that we have seen on multiple ultrabooks. This will be paired with 4GB of system RAM, and storage will be on a 128GB SSD. No word yet on whether the SSD will be available in various capacity options. A 64-bit version of Windows 8 will come preloaded on the device, but is the base edition, that should not be confused with Windows 8 Pro or Windows 8 RT.

Sony has said that this device will be available in India starting end of December 2012, and will be priced at Rs. 89,990.