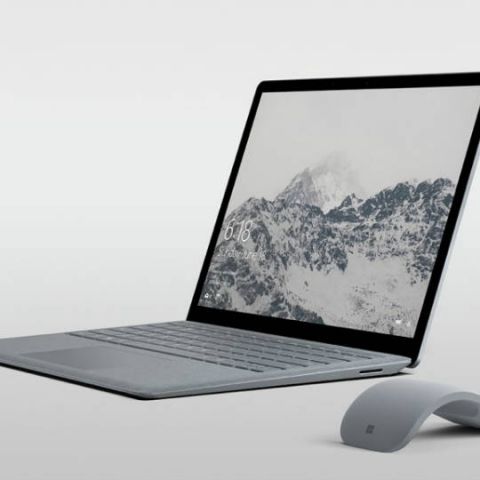 Microsoft is set to announce Windows 10 Cloud (also dubbed as Windows 10 S) at its event in New York later today. Along with the launch of the new iteration of Windows 10, the company is also expected to showcase new hardware running the new operating system. Ahead of Microsoft's announcement, Twitter user WalkingCat has posted images of Microsoft's upcoming laptop.

According to the leak, the device will be simply called the Surface Laptop and could be Microsoft's answer to Google's Chromebook Pixel. The laptop reportedly has a 13.5-inch PixelSense display with support for 3.4 million pixels. The exact resolution and aspect ratio is not known as yet but the leaked image does suggest that the laptop will offer a standard USB port, mini Display port and Surface power connector.

The Surface Laptop reportedly weighs 2.76 pounds (around 1.25 Kgs) and has a thickness of 14.47mm at the back and 9.9mm at the front. The laptop is said to ship in four different colour options: platinum, burgundy, cobalt blue and graphite gold. There aren't any details on the processor powering the Surface Laptop or other hardware details just yet.

Microsoft generally announces its Surface range of devices at the New York event. The software giant is not expected to reveal the updated Surface Pro and Surface Book devices at this event and may rather showcase its Chromebook-competitor. WalkingCat claims the Surface Laptop will be the first hardware device to run Windows 10 S, which is rumoured to be Microsoft's alternative to Google's Chrome OS. It is expected to be a stripped down version of regular Windows 10 with the ability to only run Windows Store apps.