Nothing tests the performance of a laptop like the Digit Zero1 awards. Which among these convertible laptops will take home the prestigious award this year? 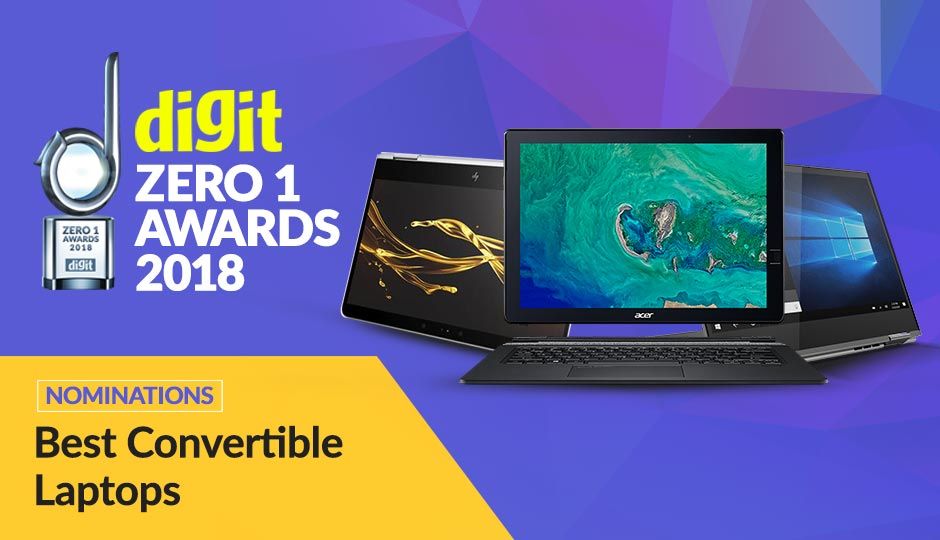 Gear up, ladies and gentlemen for we’re about to begin the process of evaluating the most powerful convertible laptop launched in India this year. Remember: as with previous Digit Zero1 awards, sheer performance is what matters in these machines. The Convertible that wows us the most with its performance figures bags the prestigious award. Let’s take a look at our nominees for this year:

We were initially expecting to nominate a top-of-the-line model from Acer’s Spin series but decided to go with the Switch 7 Black Edition for Acer’s entry in the Convertible category because the best Spin laptop is ‘not yet available’ in the country. The Switch 7 packs an eighth-generation Intel Core i7 CPU, 16GB of RAM, and a LiteOn SATA-based solid-state drive behind its 13.5-inch QHD touchscreen display. To render graphics, it’s got an NVIDIA GeForce MX150 GPU with 2GB of video RAM. All this makes the Convertible over 1.6 kilogrammes heavy. Nevertheless let’s see if the Switch 7 can impress us with its numbers for a Digit Zero1 award. Click here to buy.

HP launched the Spectre line a couple of years ago and is now bolstering it with updated products. One of them is the Spectre x360. The updated 2018 version has an eighth-generation Intel Core i7 CPU, up to 16GB of RAM, and up to 512GB of storage on a PCIe-based solid-state drive. The laptop sports a 13.3-inch touchscreen display and an integrated Intel GPU for graphics. It weighs 1.26 kilogrammes. Its display can fold all the way back to meet the base and accept inputs made using an HP Pen stylus. Let’ see if the HP Spectre x360’s performance is worthy of a Digit Zero1 award. Click here to buy.

Lenovo refreshed the YOGA 720 by giving it a processor upgrade and some minor touch-ups before calling it the YOGA 730. As a result, it features an eighth-generation Intel Core i7 CPU, 8GB of RAM, and a Hynix 512GB PCIe solid-state drive. Graphics is handled by an Intel UHD Graphics 620 integrated GPU. The Convertible measures about 1.4 centimetres from base to lid and weighs 1.12 kilogrammes. Its Full HD touchscreen display can fold into different ‘Yoga’ positions. But will it top our charts on the performance front to take home a Digit Zero1 award? We’ll have to wait and find out. Click here to buy.