Toshiba has added a slew of products at the ongoing Computex 2013 event. 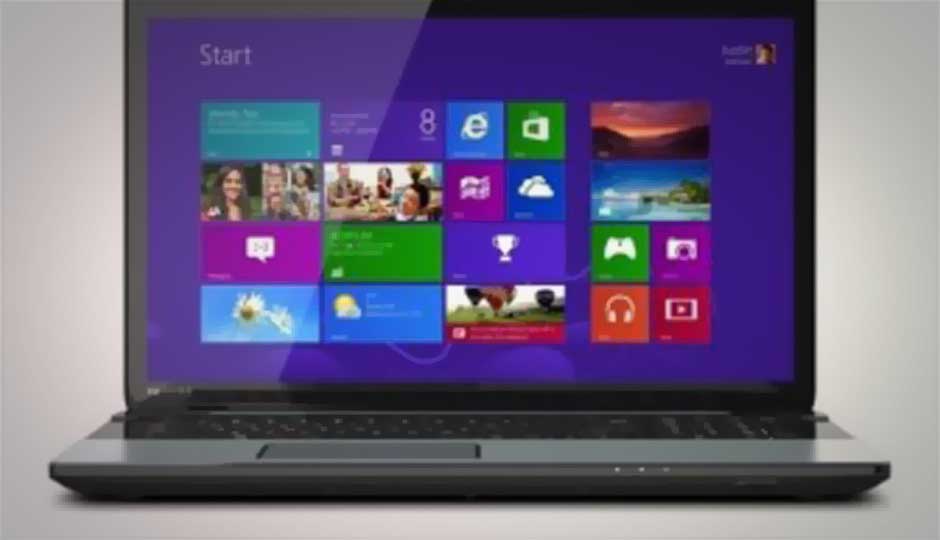 At Computex 2013, Toshiba has added a new all-in-one PC to its computing family. The system has a new design and is christened the PX35t. The system has aluminium U shaped chin that makes it look a lot like a Toshiba TV. The high-end version of the AIO is priced at $1300 (Rs. 73,600 approx.) and the device boasts of the latest Haswell Core i3, Core i5 and i7 CPUs. It will also support 16GB of RAM, house a Blu-ray drive and 1TB of storage. For your gaming needs, the system will have the NVIDIA GeForce 740M. The display of the AIO is 23-inches non-IPS with a resolution of 1920x1080 pixels. It also houses Harman Kardon speakers.

Surprisingly the AIO is targeted at a female audience and hence the mouse on the device is smaller to fit the female hand.

Moving on to Toshiba’s notebook range, the company has revamped quite a few of their offerings.

The Qosimo X75 has a grey gunmetal finish with red illuminations. The laptop has a 17.3-inch full HD display that also boasts of 3D capabilities. Under the hood, the laptop has the latest Haswell Core i7 processor, 3GB NVIDIA GeForce 770M GPU along with support for up to 32GB of RAM. You also get 1.25TB storage along with the optional SSD. The HDMI 4 out on the laptop also has the ability to output 4K content. The laptop will launch on June 10th for a price of $1550 (Rs. 87,800 approx.). The Toshiba P series of laptops represent laptops for the "premium," customer. Put simply, these are the best machines Toshiba has to offer. The P series shows off a 15- and 17-inch model. The laptops come with HDMI 1.4 out, Harman Kardon speakers with DTS sound and Sleep-and-Charge/Sleep-and-Music connections. The P series of laptops has a brushed-aluminum chassis. The devices are said to be up to 25 percent thinner than the last-gen laptops. Users get the option of Intel Core i5 and i7 processors, or the AMD's A10 chipset. Users get up to 1TB of storage and the 2GB NVIDIA GeForce 740M GPU as an option. A full DH display on the machines is optional as well. The 15-inch variant will come with a touch as well as non-touch options. The 17-incher is non-touch though. There is no official word on the pricing of the P series from Toshiba.

The S series of laptops are a mix of aluminum and plastic. The screen sizes of the S series ranges from 14 to 17-inches. Under the hood the laptop boasts of the new Haswell processors. The laptops are available in a touchscreen and non-touchscreen variant. A Blu-ray drive and NVIDIA's 2GB 740M GPU, too are optional. Backlit keyboards and Harman Kardon speakers make it in the standard package. The 14 and 15-inch displays have a resolution of 1,366x768 where as the 17-inch models have a 1,600x900 pixel resolution. A 1080p display is optional for the users. There is no word on the pricing of the devices.

This is Toshiba’s entry-level laptop series. The C series now as a better build and a sturdier design. The C series is available in 15- and 17-inch variants. The laptops start at a price of $399 (Rs. 22,600). Under the hood, the C series shows off the Pentium processor, 4GB of RAM and a 500GB HDD. The C series will be available with Core i3 and AMD A4/A6 processors and support up to 750GB of storage. You also have the option of a touchscreen on the C series but this will of course take the price up. The Satellite C series will hit store shelves later this month in the US.

Resting one notch above the C series are the L series of laptops from Toshiba. They can be considered as more mainstream devices and are priced starting at $600 (Rs. 34,000 approx.) For the price you pay, you get a chiclet style keyboard, chambered speakers, USB 3.0 ports along with a Core i3 or i7 processors. You also get a 500GB hard drive that can go up to 1TB. You also have the touch as well as non-touch screen option for the laptops just like the Satellite C series. The Satellite L series will be available later this month.