The Asus has launched its Zenfone Max Pro M2 in India on December 10 with upgrades in camera, processor, and display. We are comparing the device with other budget smartphones in the market. The comparison is based on specifications, features, and price. 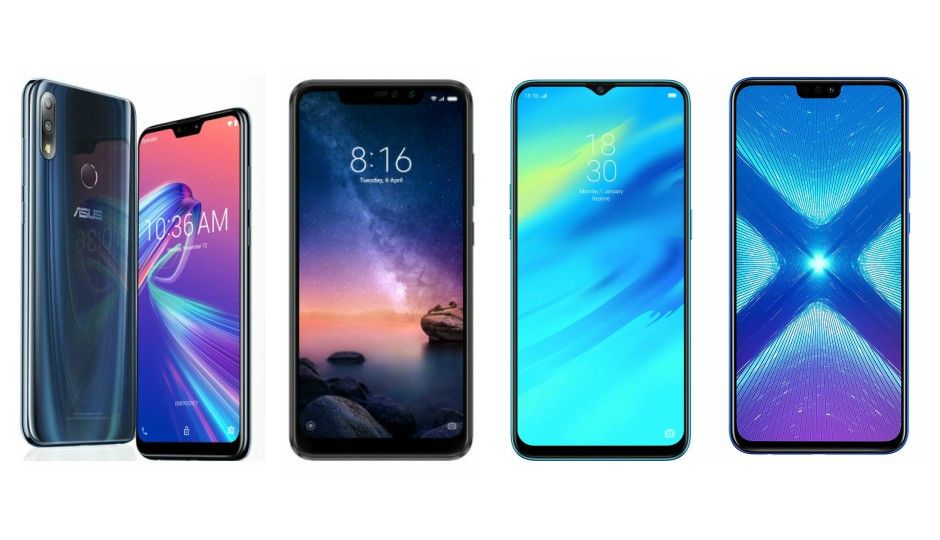 The Asus Zenfone Max Pro M2 is a successor to the Max Pro M1, which was launched by the company earlier this year. The company has made improvements in camera, processor, and display in their latest Max Pro M2. The phone is launched in India with a starting price of Rs 12,999 for its base variant. We are comparing the device with the Xiaomi Redmi Note 6 Pro, RealMe 2 Pro and Honor 8X to see where does the new Max Pro M2 stands in comparison to these other popular budget devices.

The Asus Zenfone Max Pro M2 sports a 6.3-inch full HD+ notched display that comes with an aspect ratio of 19:9. The display is protected by Corning Gorilla Glass 6. The smartphone supports face unlock and come with a physical fingerprint sensor as well.

The Xiaomi Redmi Note 6 Pro features a slightly smaller 6.26-inch full HD+ display that offers a resolution of 2280 x 1080 pixels. The smartphone has a notch on top of it, which houses a dual front-facing camera. The phone comes with AI-face unlock and is equipped with a physical fingerprint sensor as well, which is placed on the back.

The RealMe 2 Pro comes with a 6.3-inch full HD+ display with 19:5:9 aspect ratio. It has a tiny dew-drop notch on top of it, which gives you more viewing area and a higher 90.8% screen-to-body ratio.

The Honor 8X has a bigger 6.5-inch FHD+ display that comes with an aspect ratio of 19:5:9. It has a traditional notch on top of the display, which houses the front-facing camera and a speaker.

The Asus Zenfone Max Pro M2 is powered by a Qualcomm Snapdragon 660 processor. The device has been launched in India in three variants 3GB/32GB, 4GB/64GB, and 6GB/64GB. The internal storage is also expandable to up to 2TB via a microSD card.

The Xiaomi Redmi Note 6 Pro is backed by Qualcomm Snapdragon 636 processor, which is coupled with 4GB/64GB and 6GB/64GB variants. The storage is expandable to up to 256GB via a microSD card.

The RealMe 2 Pro is powered by Qualcomm Snapdragon 660 processor same as the Asus Zenfone Max Pro M2. The smartphone is available in three storage models 4GB/64GB, 6GB/64GB, and 8GB/128GB. The phone has a dedicated microSD card slot that allows you to expand the storage to up to 256GB via a microSD card.

At last, the Honor 8X is powered by the Huawei’s own Kirin 710 octa-core processor. The phone is available in three storage models 4GB/64GB, 6GB/64GB, 8GB/128GB. The device internal memory can be expanded to up to 400GB via a microSD card.

The Asus Zenfone Max Pro M2 features a dual rear camera, which consists of a 12MP primary camera and a 5MP depth sensor. The cameras at the back are capable of recording videos in 4K resolution. At the front, it has a 13MP sensor that supports portrait mode and will soon receive electronic image stabilization feature via FOTA update.

The Xiaomi Redmi Note 6 Pro has total four cameras- two at the back and two on the front. This is the first device by the company that has dual camera setup at both front and back. It has a dual 12MP + 5MP rear cameras with a dual 20MP + 2MP selfie cameras that come with the famous portrait mode, which also allows you to edit blur level in pictures.

The RealMe 2 Pro also has a dual 16MP + 2MP rear cameras with a 16MP sensor on the front. The phone comes with 5 modes of portrait lighting and has AI-based beauty selfie camera that automatically detects your skin complexion in the picture and enhances it using AI technology.

The Honor 8X also comes with a dual camera setup at the back comprising of a 12MP Primary camera and a 2MP depth sensor. The AI-based rear cameras can identify 22 different categories of objects in photos and 500+ different scenarios in real time, while its selfie camera comes with the popular Bokeh effect.

The Asus Zenfone Max Pro M2 packs a 5,000mAh battery with 10W fast-charging support. According to the company, the battery can last for up to two days.

The Xiaomi Redmi Note 6 Pro has a 4,000mAh battery that should last for at least a day.

The RealMe 2 Pro is backed by a 3,500mAh battery, which is coupled with AI power master to ensure long battery life.

The Honor 8X packs a 3,750mAh battery, which as per the company can get you through an entire day without charging with a moderate usage.

The Asus Zenfone Max Pro M2 has been launched in India at a starting price of Rs 12,999 for the base model, which comes with a 3GB/32GB storage option. The 4GB/64GB model is priced at Rs 14,999, while its 6GB/64GB variant will be available for Rs 16,999. The device will go on sale for the very first time on December 18 exclusively on Flipkart.