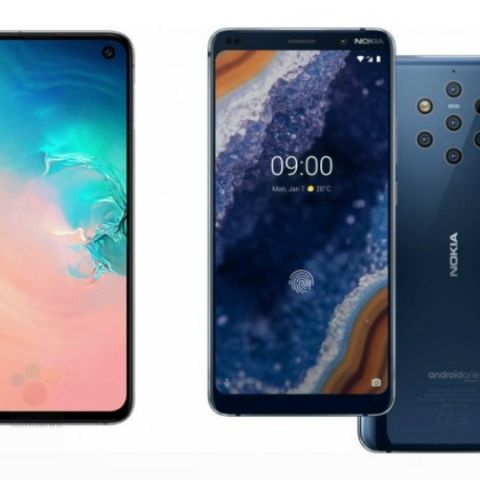 After months of speculations and rumors, HMD Global finally launched its Nokia 9 PureView at an event in Barcelona on Sunday. One of the key highlights of the Nokia 9 PureView is its Penta-lens camera setup on the back. The phone is also a part of Google’s Android One programme. The device runs on Android 9 Pie and is backed by a Qualcomm Snapdragon 845 processor. On the other hand, we have the Samsung Galaxy S10, which is also launched very recently. It is the first device by Samsung that comes with an infinity-O display. The phone is a successor to the Samsung Galaxy S9 and packs solid specifications. So, let’s see which device among these two would able to win the battle at least on paper? 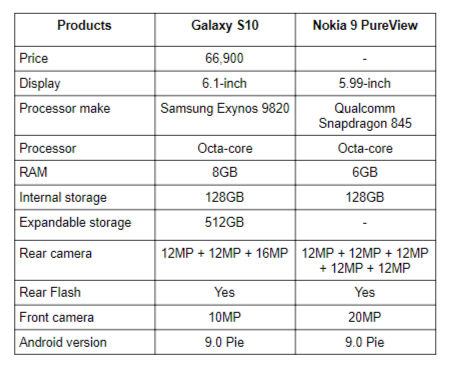 The Samsung Galaxy S10 sports a 6.1-inch Quad HD+ display. The default resolution is FHD+ that can be changed to Quad HD+ through settings. Instead of a notch, the device has a small punch hole cut out at the front for a selfie camera. It is the world’s first device that comes with an Ultrasonic fingerprint sensor, which is embedded inside the display. On the other hand, the Nokia 9 PureView sports a slightly smaller 5.99-inch Quad HD+ POLED display that has an aspect ratio of 18:5:9. The Nokia 9 PureView also features an in-display fingerprint sensor.

The Samsung Galaxy S10 is powered by an Exynos 9820 octa-core processor, which is paired with 6GB RAM and 128GB storage. The phone will also come in 8GB variant. One can also expand the storage to up to 512GB via a microSD card. On the other side, we have the Nokia 9 PureView, which is backed by the Qualcomm Snapdragon 845 processor that is coupled with 6GB RAM and 128GB internal storage.

The Samsung Galaxy S10 sports a triple 12MP + 16MP + 12MP camera setup on the back. There is a telephoto lens for zooming, a wide angle lens and an ultra-wide angle sensor for clicking panoramic landscapes. At the front, the device sports a 10MP camera for clicking selfies. For the very first time, users will be able to record 4K UHD videos with a front-facing camera from a Samsung device.

One of the key highlights of the Nokia 9 PureView is the Penta-lens camera setup on the back with Zeiss certified lenses. The phone has three 12MP monochrome sensors and two 12MP RGB sensors. As per the company, when you will click the shutter all five lenses will shot different exposures and produce one high-quality shot. The phone has a 20MP unit on the front for clicking selfies.

The Samsung Galaxy S10 packs 3,300mAh battery that supports 10W+ wireless charging. The phone comes with an Adaptive Power Saving mode that manages your battery life on the basis of your usage. One of the most interesting features that Samsung has introduced in the Galaxy S10 is reverse wireless charging, which Samsung calls PowerShare. You just need to place the compatible device on the back of the Galaxy S10 to charge it such as a smartwatch or Apple iPhone 8.

On the other hand, the Nokia 9 PureView packs 3,320mAh battery that also supports wireless charging.

The Samsung Galaxy S10 is priced at Rs 66,900 in India. Those who will pre-book the device are eligible to get up to Rs 6,000 cashback on making payment via an HDFC bank credit or debit card. You can also get the Samsung wireless earbuds for Rs 2,999 on pre-booking the device, which are originally priced at Rs 9,999. On the other side, the Nokia 9 PureView is launched at a price tag of $699, which roughly translates into Rs 49,700. The phone is expected to make its debut in India very soon.