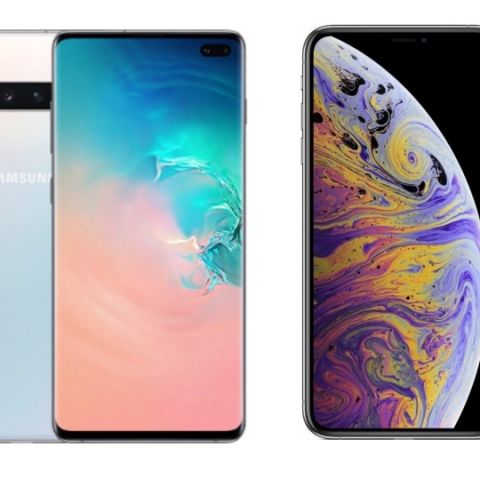 Recently, Samsung has launched three new devices under it's Galaxy S lineup - Galaxy S10, Galaxy S10e, and Galaxy S10+. The premium device of the lot is the Galaxy S10+, which is starting at Rs 73,900 in India. The key highlights of the Galaxy S10+ are in-display Ultrasonic fingerprint sensor, triple camera setup on the back and a dual front camera. The phone is directly competing against Apple’s most expensive device till date iPhone XS Max, which is powered by the Apple latest A12 Bionic chipset. So, let’s compare the specs of these two devices quickly to see which one is more powerful when it comes to the hardware. 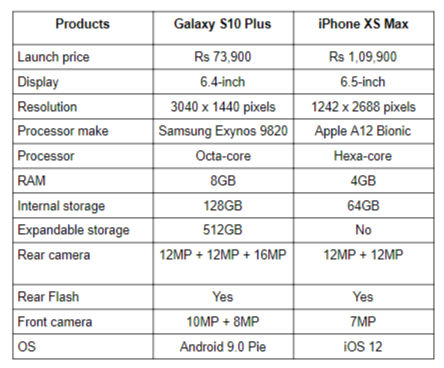 The Samsung Galaxy S10+ features a huge 6.4-inch QHD+ display that offers a resolution of 3040 x 1440 pixels. It is the first device by Samsung that comes with an Infinity-O display, which means instead of a notch there is a little wider punch hole cut out at the front for a dual selfie camera. On the other hand, the Apple iPhone XS Max sports even a little bigger 6.5-inch screen that comes with a resolution of 1242 x 2688 pixels. The phone has a traditional notch on top of it, which houses the front-facing camera and a microphone.

The Samsung Galaxy S10+ is powered by an Exynos 9820 octa-core processor, which is coupled with 8GB RAM and 128GB  internal memory. The phone internal storage can be expanded to up to 512GB via a microSD card. The Samsung has also launched a higher-end version of the Galaxy S10+, which comes with 12GB RAM and 1TB of storage, which is also expandable.

On the other hand, the iPhone XS Max is powered by the Apple latest A12 Bionic chipset, which is paired with 4GB RAM and 64GB internal memory. As usual, there is no microSD card slot to expand its memory. However, the device is available in 256GB and 512GB storage models, which are insanely expensive and available in India at Rs 1,24,900 and 1,36,9000 respectively.

The Samsung Galaxy S10+ comes with a triple 12MP + 16MP + 12MP camera setup on the back. There is a telephone lens for zooming, a wide angle lens for your regular clicks and an ultra-wide angle sensor for landscapes. The phone has a dual 10MP + 8MP front cameras for clicking selfies.

On the other side, the iPhone XS Max comes with a dual 12MP rear cameras and a 7MP sensor on the front.

The Samsung Galaxy S10+ is now can be pre-booked via Samsung’s official website. Those with an HDFC bank card can also get a Rs 6,000 cash back on making payment via bank’s debit or credit card. On the other side, the iPhone XS Max 4GB/64GB variant is available in India at Rs 1,09,900.