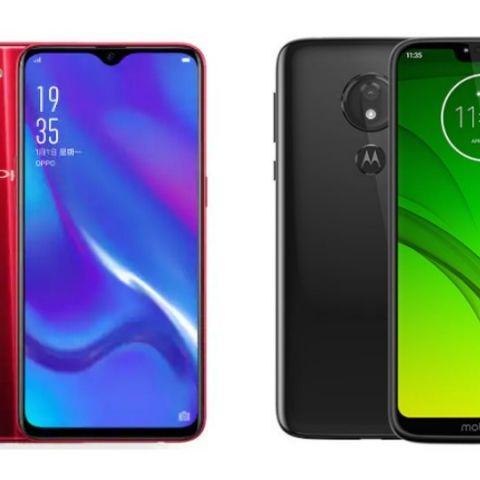 Recently, Motorola has announced four new smartphones under its G series lineup - Moto G7, Moto G7 Power, Moto G7 Plus and Moto G7 Play. Among these four devices, only the Moto G7 Power has been revealed in India yet officially. On the other hand, we have Oppo’s latest K1 that is priced under Rs 20,000 in India and is currently the most affordable device in the market that features an in-display fingerprint sensor. We pitted the smartphone against each other to know which one among these two smartphones would be the right buy for you if you’re thinking of buying one? 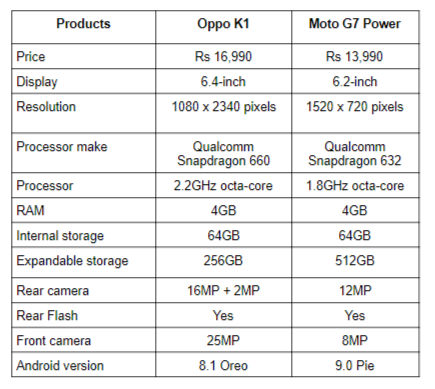 Let’s start with comparing the display of these two devices in detail. The Oppo K1 features a 6.4-inch FHD+ display that comes with a resolution of 2340 x 1080 pixels. The display has a tiny dew-drop notch on top of it, which gives you more viewing area. On the other hand, the Moto G7 Power sports a slightly smaller 6.2-inch screen that offers a resolution of 1570 x 720 pixels.

When it comes to the cameras, it is quite surprising that the Motorola has provided a single 13MP sensor at the rear along with an 8MP unit on the front. Most of the other companies are giving at least a dual lens setup on the back even on their budget devices. However, it would not be fair to judge the quality of the camera on the basis of Megapixels and amount of lenses it consists. On the other hand, the Oppo K1 has a 25MP front camera for clicking selfies and a dual 16MP + 2MP rear cameras.