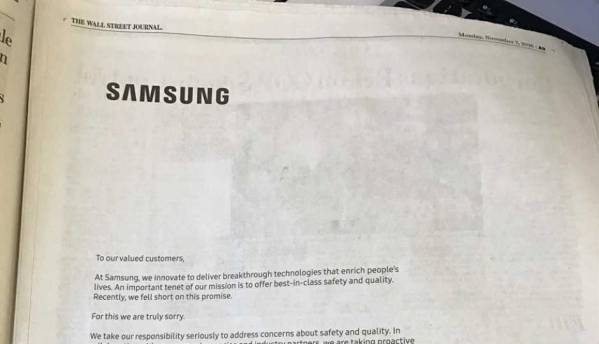 Samsung Electronics is running full page ad apologising for the Galaxy Note 7 recall, in major US newspapers. The apology ad pledges to thoroughly look into what led to the massive recall of its Galaxy Note 7 device. The move is seen as an effort to restore the lost confidence and renew its commitment to consumer safety.

"An important tenet of our mission is to offer best-in-class safety and quality. Recently, we fell short on this promise. For this we are truly sorry," Samsung's full page ad reads. The ad appeared on Monday in major US dailies namely the Washington Post, the New York Times and the Wall Street Journal. The apology is signed by Gregory Lee, the president and CEO of Samsung Electronics North America.

Full-page apology ads are the future of print media: pic.twitter.com/fBAZ9uXFmD

"We will re-examine every aspect of the device, including all hardware, software, manufacturing and the overall battery structure. We will move as quickly as possible, but will take the time needed to get the right answers,” the ad reads. Samsung says it's continuing to investigate the cause for Galaxy Note 7's battery overheating issue. The company plans to investigate the device's development and manufacturing processes to fully understand what went wrong and caused the battery to overheat and catch fire.

Samsung launched the Galaxy Note 7 (in India) in August and recalled over 2.5 million units globally since the rollout. Samsung recently said that around 85 percent of all the devices have been replaced in the US.

The Samsung ad also mentions the voluntary recall for its top-loading washing machines. 'Most importantly, safety remains our top priority. We are grateful for your ongoing support and again, we are truly sorry," the ad concludes.

Samsung is leaving no stone unturned to limit the damages to its brand, post the Galaxy Note 7 debacle. However, it would be important for the company to understand the cause and fix the same before the launch of its next Galaxy flagship device.