India has 22 scheduled or official languages with more than 10,000 speakers each, and yet most of the technologies available to Indians on a daily basis is available mostly in English. There is a big gap when it comes to the content and services available for Indic language users. Beyond information or forums, there are gaps in natural language interfaces, videos, games and applications as well. For native language speakers, the internet is almost an alien landscape. The question is not just about translating content in English to Indic languages, but creating the underlying technologies in local languages that allow Indic language speakers to create, publish, share and interact with content that is relevant to them, and is relevant to their sensibilities. Beyond smartphone apps and the internet, almost all the technologies that urban users interact with on a daily basis, including ATMs, ticket vending machines, automated water kiosks, vending machines, indicators on public transport, subway maps and so on are all in a limited number of languages, which can be confusing for Indic language speakers. Leading the charge in delivering local content in Indic languages is Reverie Language Technologies, a company that has been working with several businesses, as well as government agencies in delivering content and services in Indic languages to the underserved. On January 18, Reverie opened up its APIs to developers in a hackathon called RevHack at NASSCOM in Bengaluru, which was the first hackathon in India to focus exclusively on developing solutions for Indic language speakers.

We spoke to one Arvind Pani, CEO and co-founder of Reverie Language Technologies, about the intent for the hackathon. “The basis of this hackathon was that we have a complete stack of technologies to address various aspects of user engagement in Indian languages,” Pani explained, “our company is a b2b company, and we expose this stack to companies which want to build user engagement experiences in Indian languages. We really wanted to expose this stack to the developer community. We cannot be ideating every single thing, and it is good if the community ideates and they can use our stack to build on top of those ideas. That was the reason why we had this hackathon.” To start with, over 150 people turned up for the hackathon, all focused on solving unique problems, which was an exceptional attendance according to Jonathan Bill, CEO and co-founder of Credit Mate, and one of the judges at RevHack. “It was pretty extraordinary I think”, Bill said, “the turnout was much larger than we had expected or hoped for, so that was great. Quite a diverse set of people coming to try and use Reverie’s APIs to address the language issues in India. There were some quite great ideas, and it was a fun day.“
Considering the specific and unique problem that the RevHack was addressing, it wasn’t just another hackathon where the developers and teams showed up to hone or showcase their skills. Everyone who participated were really interested in tackling the tricky problem, and coming up with unique solutions. When asked if the participants were passionate about the hackathon, Bill responded, “Yeah hugely. And that’s something that I think was exciting. Actually there were two things that happened. Previously perhaps it felt like perhaps a bit of an obligation, a bit like the way perhaps financial institutions treat Indic languages, which is that it is an obligation and that they have to do it. I think that the difference with the generation that we saw and that we interacted with, and generally on the internet in India now, we are seeing actually that it is a matter of opportunity to solve this problem. And if you solve that problem correctly, then the opportunity is not only exciting from an experience perspective, but it is also financially rewarding. The passion among the developers that came was very high. Pretty much, in fact we asked this question, a hundred percent of them were there because they wanted to help solve this problem, and not just because it was another hackathon.”
Jonathan Bill also made it a point to note the variety of people who showed up for the RevHack, “the thing that was very exciting for me was the diversity. We had people from all sorts of backgrounds and genders. I have been to hackathons before, and they are ninety nine percent male. Unusually, this one was kind of sixty I would say. That was encouraging as well. It may very well be that a different type of coder is attracted to solving this kind of problem, and that is what creates this kind of diversity.” 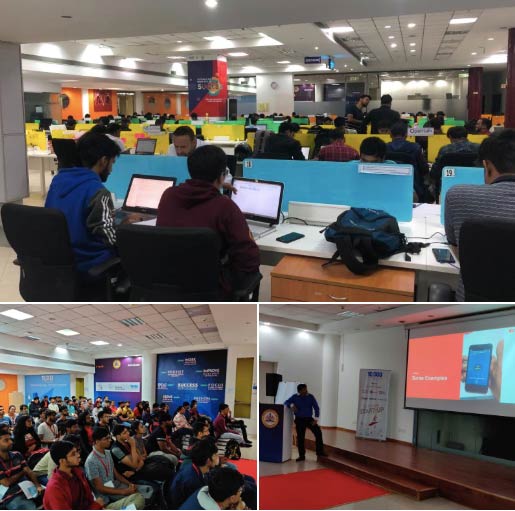 The winning team was a bunch of 11th standard students from National Public School in Bengaluru. These school children tackled two barriers of access to information at once, accessibility and local language content. They came up with a SaaS product that allows publishing houses to publish books in braille, in Indic languages, along with a user dictation component for the end user.

The team from The College of Engineering and Technology (TCE), Bhubaneshwar bagged the second prize, which simplified the form filling experience for Indic language speakers through a Google Chrome plugin. This was an idea that Jonathan Bill really liked as it eliminated agents who get paid to fill in these forms for Indic language speakers. Bill explains, “Let’s say you are filling in a form for a subsidy or a grant or something, the plugin helps you by reading out what the form says, and helping you to fill in the form correctly. As you may know, currently in India, because all forms are in one language, and not everyone can speak or read or write in that language, then a middleman exists, who takes a commission especially in smaller places. So this plugin helps in bypassing that.“
There were three consolation prizes. A team from Altisource developed a solution that uses text to speech and speech to text so that illiterate people can interact through voice, preventing dependence on intermediaries who might misrepresent the data. A team from the Ramaiah Institute of Technology in Bengaluru came up with an inventive solution for shoppers, especially for use in kirana stores in rural areas. The shopper simply dictates a shopping list, which is interpreted by an app with the shopkeeper, who can then dispatch the goods. The solution also supports payment through UPI. Keeping in mind the shopping habits of the individuals in local areas, the app additionally keeps track of the debt owed by each individual shopper. Over and above all this, the app tracks movement of goods, which can better help the Kirana store owner with inventory management. Since the entire app is voice based, it can as easily be used by visually impaired shoppers as well. A team from Dayananda Sagar University came up with an application that allows doctors and patients in rural areas to converse with each other, even if they are not familiar with the same language. This reduces the time taken for a consultation, and both the doctor as well as the patient can speak in the language that they are most comfortable with. 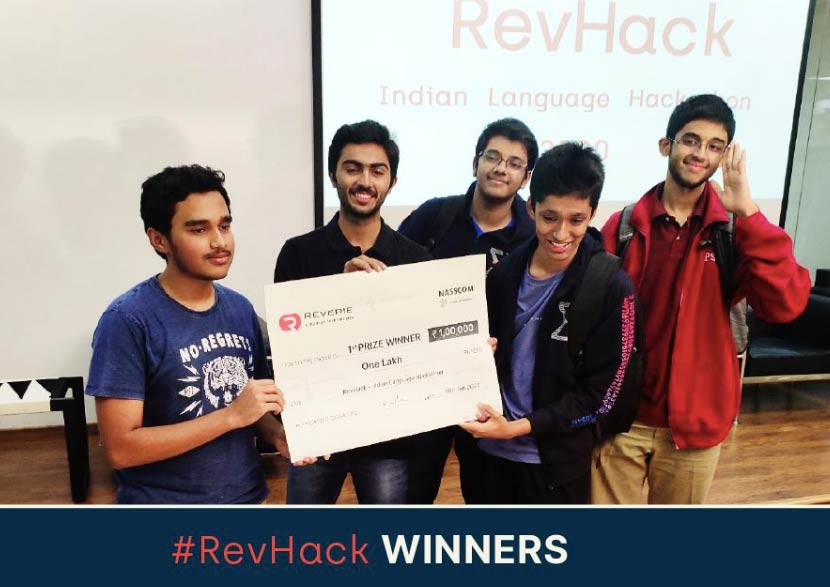 Pani found the solutions developed extremely encouraging, “this was a huge success, and it was beyond our expectations. There were about 150 participants who came. We did not expect so many people to turn up for the hackathon. This is really encouraging, (they showed up) knowing very well that this is going to be a hackathon on Indian languages and Indian language technologies. Then it was also very encouraging that there were students not just from tech colleges, but there were students from schools also. As you can clearly see, the first prize winners were actually from a school. Folks thinking about solving problems for India and addressing the issue of language… because language is a key impediment to digital engagement in India, these are very encouraging finds. We hope that this trend continues, and it manifests in a real world business situation where people are also working towards resolving the issues around engagement in local languages. The quality of ideas, the number of participants, and the depth that they had gone into in some of the solutions that they worked on were all very encouraging.”
Bill explained how the solutions developed at the hackathon went beyond merely translation or transliteration, “it is a great theme, and timely. As we all know, if you look at the way the internet is growing in India and deepening its penetration, one of the major drivers of that is the ability for people to discover content in their own language. Typically, the businesses that are thriving in India and growing very fast are actually those based on local language content. TikTok would be a great example of that, where people are able to communicate naturally and easily in the language that they love, and the one that they are most comfortable expressing themselves in. On the Internet, text especially has started in English, with very minimal Indic language content, which has been somewhat disastrous if you ask me. The point I’m making is, where you give people the opportunity to communicate specially using voice, or song or humor, all of those things are more natural and more exciting for people in their local language. The same should be true for everybody.” 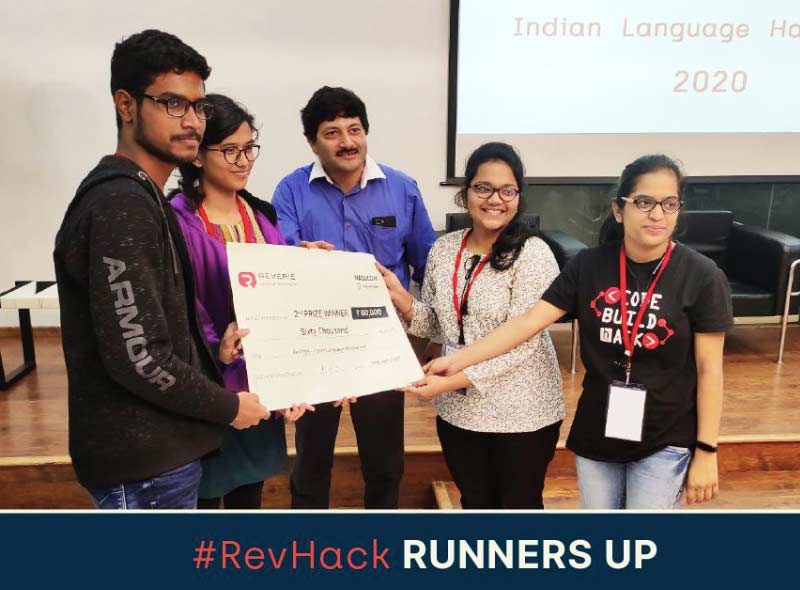 The runner's up from CET Bhubhneshwar with co-founder of Reverie, Vivekanand Pani