Tiny printed 3D Lithium ion microbatteries have been developed by researchers, with applications in aerospace, communications, medicine, and robotics. 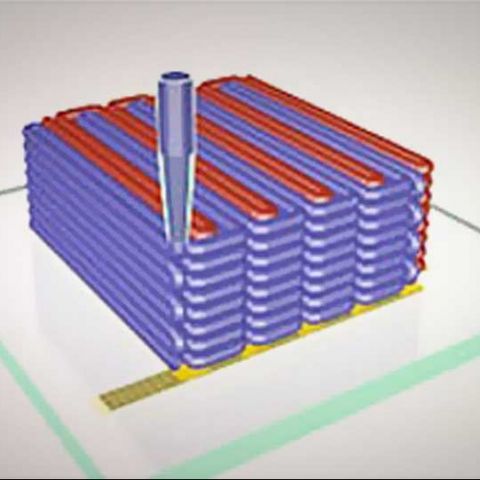 A new technique has been successfully developed by researchers to 3D print grain-of-sand-size Lithium-ion microbatteries, using special inks extruded by a nozzle thinner than a human hair. The research team comprises members from the Wyss Institute at Harvard University and the University of Illinois at Urbana-Champaign.

A custom-built 3D printer was used to print the microbatteries, with the diagram below displaying the structure. The inks are layered in ultra-thin planes, and then solidify to form the anode (represented in red) and the cathode (blue). The whole is then enclosed in a glass-like case, and filled with electrolyte solution.

The team says these the microbatteries can be used to supply electricity to tiny devices in various fields ranging from robotics, medicine to aerospace and communications. The batteries will also help projects that have been lingering on lack of a battery small enough to power them.

The new printed 3D Lithium-ion microbatteries will be able to power tiny devices like medical implants, flying insect-like robots, tiny cameras and miniature microphones that can fit on a pair of glasses. The researchers have claimed that in spite of the tiny size, the battery's electrochemical performance is as good as commercial batteries. They have the same charge and discharge rate, cycle life and energy densities as normal batteries.

"We have designed a broad range of functional inks—inks with useful chemical and electrical properties and used those inks with our custom-built 3D printers to create precise structures with the electronic, optical, mechanical, or biologically relevant properties that we wanted,” says Lewis. “Not only did we demonstrate for the first time that we can 3D-print a battery; we demonstrated it in the most rigorous way” stated senior author Jennifer A. Lewis of the Harvard University.