Hyperloop One has announced ten winners from its longstanding competition to pick routes around the world. The announcement comes just over a month after Hyperloop One successfully completed phase 2 of its testing on a track in the deserts of Nevada. The company is arguable the only one close to making real world Hyperloops, and has been speaking to various governments, including India.

Amongst the winning entries in the Hyperloop One Global Challenge are two teams and routes from India. AECOM and Hyperloop India, the two winning teams from India, proposed routes between Bangalore-Chennai and Mumbai-Chennai, respectively. A fully functional Hyperloop system can cover either route in under 50 minutes. Other winning entries are in the table below. 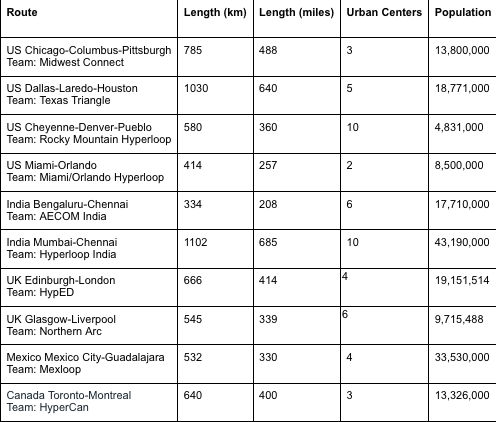 Hyperloop One will now conduct feasibility studies on these routes. In fact, one such feasibility study is underway with the Colorado Department of Transportation right now. Hyperloop One says it’s entering into a public-private partnership to begin the study, which “examines transportation demand, economic benefits, proposed routes and potential strategies, regulatory environments and alignment with overall CDOT high-speed travel, rail and freight plans.”

The Indian government had been interested in the Hyperloop concept when the company came to India in March this year. At the time, representatives from the Indian government reiterated its support for the transportation system. Of course, India’s focus at this moment is probably on the proposed bullet train, while a Hyperloop system is something that may come to fruition in future.

It’s worth noting that the routes proposed right now are meant for trade and commerce, rather than passenger travel. It’s probably going to be a while before a Hyperloop systems starts carrying actual passengers across cities.