HP shows of Wall of Touch- Touch without dirtying the wall

We all love the feeling that comes with touching a screen to make it work.

HP shows of Wall of Touch- Touch without dirtying the wall 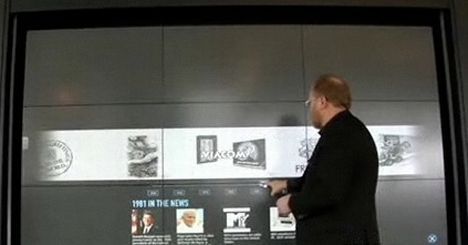 We all love the feeling that comes with touching a screen to make it work. That is on of the reasons that touch devices have come so far. But don’ we all hate the smudges and fingerprints that we leave on the device? HP seems to have heard your woes, for it has launched HP “Wall-Of-Touch.”

We were a bit surprised to hear of this technology after CES 2010. HP skipped that reputed platform and recently unveiled their Wall-Of-touch to the Wall Street Journal. Though this technology is aimed at only big businesses and organizations, it has gained a lot of popularity. The Wall of Touch runs on HP’s Z800 workstation. The Wall of Touch is a gigantic wall of multiple touch screens. It has 9 touch screens, each 43 inches across have 1080p resolution. What differentiates it from other touch devices is that it is not much of a ‘touch’ device. It can detect the users’ gesture even when the user brings his hand close to the wall. It has built in cameras and a magnetic strip to detect the users’ intent before his touching the screen. This means that this is one wall which will never get dirty! You can forget the issue of smudges on this touch screen device thanks to HP’s unique concept.

For now this technology is only restricted to big businesses courtesy its $100,000 price tag. NBA, Edelman PR and Continental Airlines are the first companies which have bought the Wall of Touch. Continental Airlines has already installed the Wall of Touch at its terminal at the Houston Airport.  This device has a number of applications for everyone. It can be used for HD Video Conferencing, already making it a favorite for board rooms. Though its price tag is very steep, HP hinted at making it a mainstream product in the next couple of years. It plans to market it in different models, ranging from just small screens to the large Wall of Touch we have just seen. It will cater to the needs of all users and will have a price tag ranging from $2000-$100,000. Probably, we will have to wait for quite some time for it to become a main stream product in India.