Facebook's AI-powered M assistant starts rolling out in the US 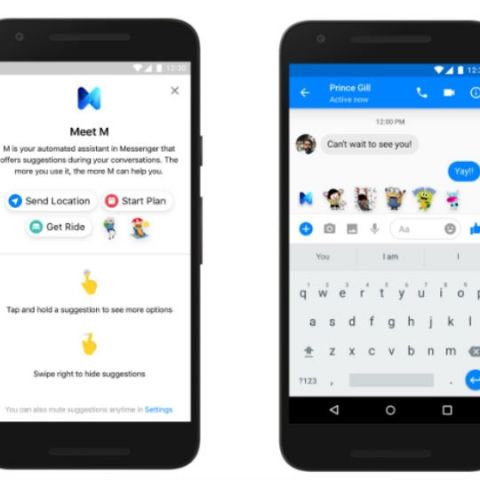 Facebook is rolling out its AI assistant known as M for Android and iOS users in the US starting today. Facebook M will offer suggestions by popping into an open Messenger conversation. Facebook announced M over a year ago and began testing M only in December last year.

Facebook says M will understand the context within an open Messenger chat and suggest stickers for frequently used texts. The digital assistant powered by Facebook's AI engine is also capable of suggesting users to share their location or facilitate payments. M is also compatible with Lyft or Uber and can help the users book a ride. Within group conversations, Facebook M will help make plan for a get together and initiate a poll. Some very familiar features that the likes of Google Assistant have already displayed.

"M relies on AI machine learning techniques. It suggests relevant actions to help manage conversations or help get things done. We are bringing the power of M’s AI technology to support and enhance the Messenger experience and make it more useful, personal and seamless," Facebook says in a released statement.

While this isn't an official launch, Facebook says M will eventually roll out to other countries. The social media giant also adds that M will have more AI-powered abilities in the future. AI-powered digital assistants are seen as the next big consumer technology. While Apple, Google, Microsoft, and Amazon already offer their own digital assistants, Samsung introduced its own Bixby Assistant with the Galaxy S8 launch.