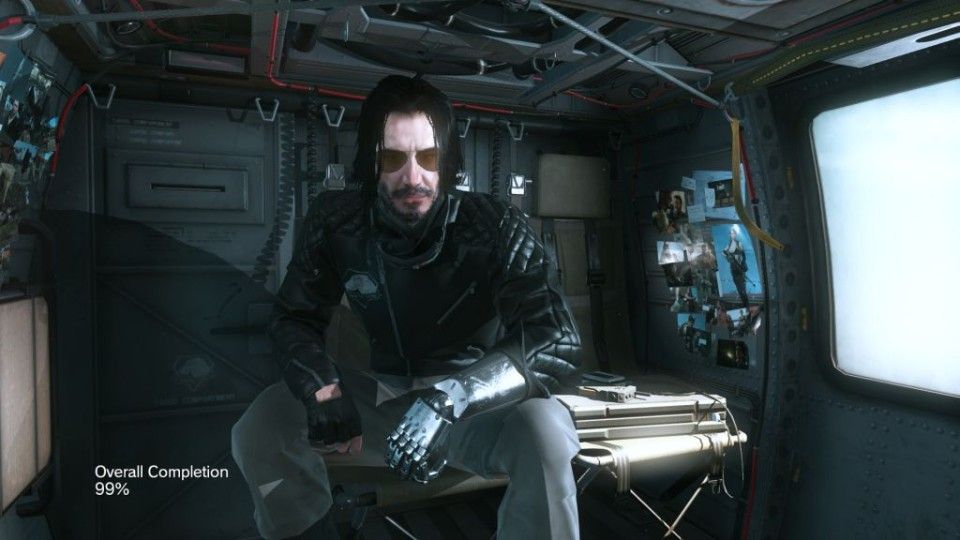 Both John Wick and Johnny Silverhand are Keanu Reeves' characters.

Keanu Reeves recently embraced, and was embraced, by the gaming community. It appears that the first Keanu Reeves mod is available for Konami’s Metal Gear Solid 5: The Phantom Pain. The mod is created by ‘JinMar’ and it allows you to play as John Wick or Johnny Silverhand from Cyberpunk 2077.

Since this is a 3D swapper, it does not alter/change the voices. So, you will be able to listen to Keanu with Kiefer’s voice. Furthermore, this progress is still a project, meaning that there might be some glitches and graphical issues while you're leaping out of helicopters and knocking out opponent soldiers. Conveniently, MGS 5 already gives us a robo-arm to play with, so Silverhand fans get the best doppelganger, but they both look great.

To get the mod, players will first have to download the SnakeBite mod manager for Metal Gear Solid 5: The Phantom Pain and then download JinMar’s mod. Go to the avatar customization option to flick between the two Keanu Reeves characters. Those interested can download the mod here and you can use the Hair 1 Preset to play as John Wick, or the Hair 2 Preset to play as Johnny SIlverhand from Cyberpunk 2077.

Some Keanu Reeves fans have also campaigned for the actor to be made Time’s person of the year, while others have asked Cyberpunk 2077 developer CD Projekt RED to add a special Reeves achievement to the game. It’s unclear whether these things will happen. However, like with this Metal Gear Solid 5: The Phantom Pain mod, fans are unlikely to stop trying to come up with ways to show their love for Hollywood and gaming’s new “it” man.