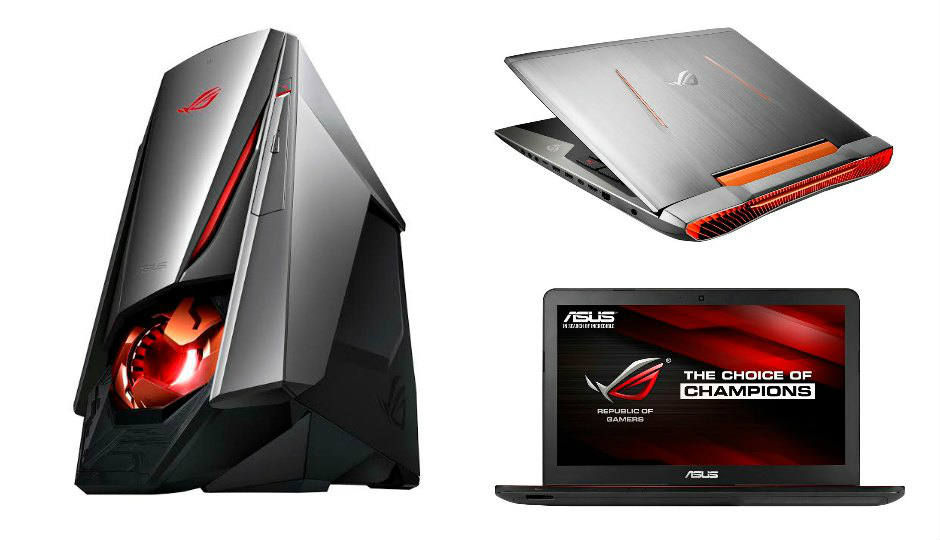 The ROG GT51 comes with a sixth generation Intel Core i7-6700K processor and offers support up to the NVIDIA GeForce GTX TITAN C (2-way SLI). The desktop also comes with a ROG Turbo Gear that lets users overclock the desktop and has Asus’ Aegis II application that monitors the system’s parameters. There is a USB 3.1 Type-C port on the front panel, which offers data transmission speeds up to 10Gbps. The GT51 also comes with the ROG Band that lets users overclock the system or activate Shadow Drive, which is a hidden space in the hard drive. The ATX chassis has an Armor Titanium and Plasma Copper finish, transparent side window, and customisable lighting.

The ROG G20 is a gaming desktop with 2.5-inch and 3.5-inch slots of SSDs and HDDs. The G20 supports up to an NVIDIA GTX 980 graphics and supports M.2 PCIe Gen 3x4 SSD. In addition, the desktop comes with Aegis II software with GameAlive, which allows users to record, edit, and stream gameplay.

The ROG G752VY runs Windows 10 and is powered by a sixth generation Intel Skylake Core i7 processor and up to 64GB of DDR4 RAM. The laptop is also equipped with a NVIDIA GeForce GTX 980m graphics. The ROG G752VY also comes with a 3D Vapor Chamber for improved cooling, and a backlit anti-ghosting gaming keyboard. The Asus ROG G501VW comes with a NVIDIA GTX960M graphics, 4GB DDR4 memory, and a 4K IPS panel. The laptop is 20.6mm thick and weighs 2.06kg and supports up to 512GB PCIe Gen 3x4 SSD. The device also supports Asus SonicMaster and ROG AudioWizard for an enhanced audio performance.