The Alexa-enabled Amazon Echo Spot is a smart speaker that can be used for placing video calls, watching videos, and more 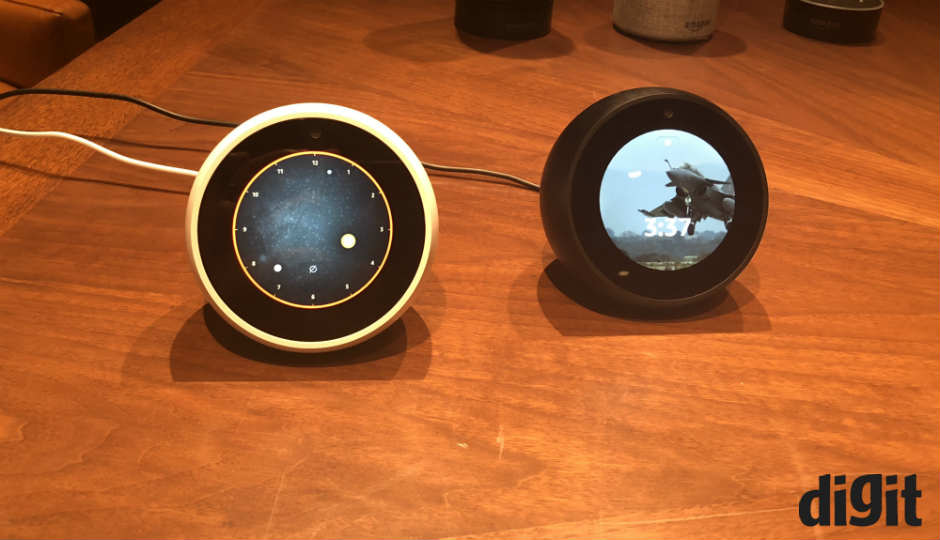 Amazon has launched its latest Echo Spot speaker in India priced at Rs 12,999. On launch itself, Amazon has discounted the speaker by Rs 2,500 and it is available for Rs 10,499. The device is a departure from all the smart speakers launched in the country till now and this includes the recently launched Google Home and Home Mini speakers. Apart from being a smart speaker that comes integrated with the company’s smart assistant Alexa, the Echo Spot also features a circular display which is 2.5-inch in diameter and comes with the volume controls and Mic/Camera mute button that are placed on top, behind the display. At the bottom-rear is the power port and a 3.5mm audio jack that can be used for connecting another speaker to the Echo Spot. It is also equipped with 4 far-field microphones with beamforming technology and enhanced noise cancellation, which is said to pick up a user’s voice commands from afar.

With the Amazon Echo Spot, users can now place video calls to anyone else who has the Echo Spot device or to the Alexa app. Users will also be able to place calls to the Echo Spot using any other Amazon Echo device or via the Alexa app, which is available for both Android and iOS. Users can choose a particular device to call in case they have more than one Echo Spot at home. It also comes with India specific skills and users can now watch news from NDTV, Times Now, ESPN Cricinfo, Aaj Tak and more. It allows for playing music from Saavn, Amazon Prime Music, Gaana and more. One can make use of the various skills to book a cab from Uber and Ola, order food from Zomato and more. As Amazon Echo devices don't support YouTube, the company offers video playback from Amazon Prime Video, Daily Motion and Vimeo.

The new Echo Spot displays video calls in a PiP mode where the caller is seen in a small window on the right. It also comes with a drop-in feature, allowing users to remotely check-in with other compatible Echo devices in their homes and it features a Do Not Disturb mode for blocking all drop-ins or calls to the device. To ensure peace of mind for privacy-concerned users, the Echo Spot features the aforementioned camera and mic on/off buttons, which are said to switch them off electrically.

Apart from video calling, the Echo Spot can do everything that the existing Echo speakers can. You can read about the Amazon Echo Spot in detail here.

Amazon is also offering a buy 2 get Rs 1,000 off offer on the Echo Spot. There is also a 10 percent cashback offer available to those who buy it using an ICICI Bank card.