With the official 2.18.110 update on the App Store, WhatsApp has remotely enabled the new group call shortcut.

WhatsApp has rolled out the official 2.18.110 update on the App Store bringing a new group call shortcut to the app. Users can now update their apps and get the new shortcut button on the top left corner of the display. The Facebook-owned instant messaging app has been testing group calling since a long time and the first mention of group calling was in October last year when WhatsApp watcher WABetaInfo found references of the feature in the source code of WhatsApp beta version for iOS. In November this year, WhatsApp was reported to be testing a shortcut for group calling.

The same source has now confirmed the availability of the newest update and has re-posted some tweets showing that the feature has been rolled in India and Netherlands, among other countries. When you tap the new button on the top right corner of the WhatsApp app on iOS- a telephone and a '+' sign - a window pops up from below listing all the members of the group. You can select the people with whom you want to start the group call by tapping them. You will see a blue tick mark against the friends you have chosen. Tap the video or audio call button to initiate a group call. 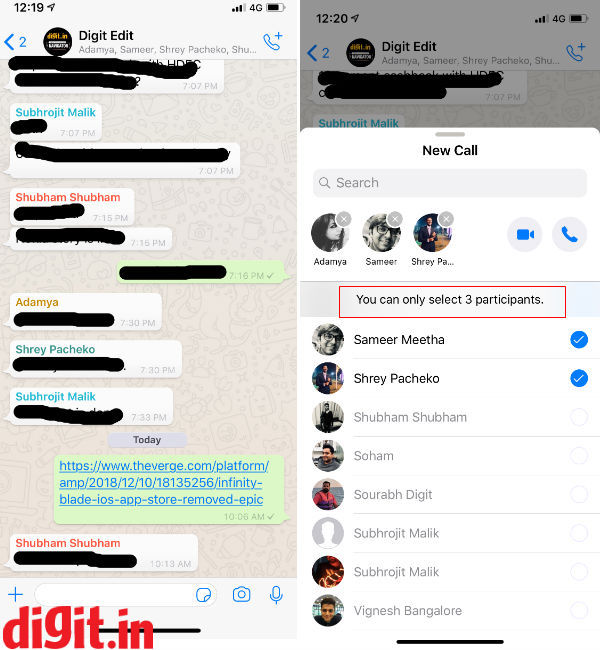 Interestingly, their is a limitation. Only four people can engage in a group call which means that you can only add three more people to the group conversation. You can also add a person who is using an Android device, even though the Google-owned OS is yet to receive this functionality. As per a separate tweet, the feature is being rolled out to Android beta users and even there, the OS is lagging behind. Some of the beta testers haven’t got the update to test and they are being advised to wait to get the feature for testing.