WhatsApp makes a new record after processing 64 billion messages in a day.

Facebook acquired WhatsApp for $19 billion in February and post the acquisition the messaging app has passed 465 million monthly active users mark. The company came under scrutiny regarding privacy issues, leading WhatsApp CEO Jan Koum to make a statement that its user privacy will not be affected even after the Facebook acquisition. WhatsApp added that it would be adding free voice calls this quarter and aims to hit 1 billion active users by year end.

Other messaging apps are also gaining immense popularity in the meantime. Japanese messaging app Line has also announced that it has recently reached 400 million registered users milestone. The company had announced reaching the 300 million user mark in November last year. Line says that the number of new users who are signing up daily, has reached “around 1.7 million per day, indicating rapid growth worldwide.” 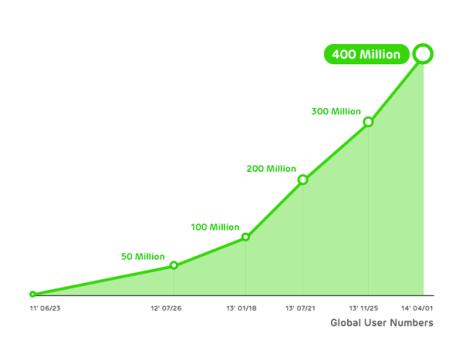 Most users of LINE are from Japan with almost 50 million registered users in the country, followed by Thailand and Indonesia where the app has 24 million and 20 million users respectively. India has another 18 million LINE users. Interestingly US has also crossed 10 million LINE users as well. The company also announced that it processed a record 10 billion messages in a day on 21 March. LINE's CEO Akira Morikawa says that the company aims to reach over 500 million users by year end.

However the LINE messaging app numbers have to be taken with a pinch of salt, as it double counts users who have one account but use LINE on multiple devices. The messaging app doesn’t provide active user numbers, so its difficult to compare it with other messaging apps like Whatsapp or WeChat which have 465 and 355 million monthly active users respectively.