WhatsApp adds new feature to verify forwarded messages, but not for India

WhatsApp is rolling out a new feature called 'search the web' to fight fake news.

India is not on the list of countries to get this feature.

The new feature is an easy way to verify any forwarded message on WhatsApp. 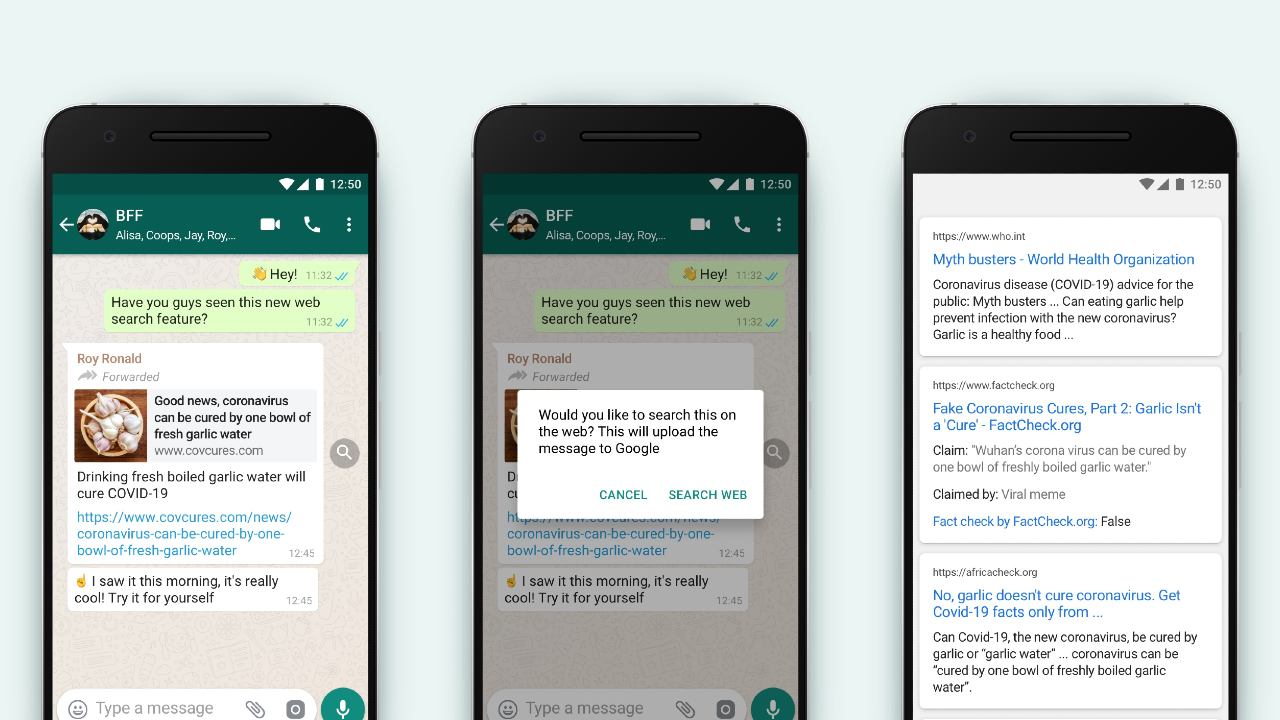 WhatsApp has announced that it is rolling out a new feature called 'search the web' to empower its effort in fighting fake news and hoaxes. The new feature will make fact-checking any WhatsApp forwards a lot easier by just one tap. The company was spotted testing this feature back in March.

On its blog, WhatsApp announces, "Today, we’re piloting a simple way to double-check these messages by tapping a magnifying glass button in the chat. Providing a simple way to search messages that have been forwarded many times may help people find news results or other sources of information about content they have received."

The new feature is an easy way to verify information given in any forwarded message on WhatsApp. There's a new magnifying glass button next to the chat bubble which, when tapped, helps users to find news results or other sources of information about the message they have received. WhatsApp says the company does not have access to the messages during the process, as it's sent directly to the browser. WhatsApp has not said if it's only limited to text messages or to images and videos as well.

'Search the web' is only being rolled out starting tod out in Brazil, Italy, Ireland, Mexico, Spain, UK, and the US. It will be available on all latest versions of WhatsApp across Android, iOS and Web.

India is among the biggest market for WhatsApp, and it's not on the list to receive this feature as of now. It is also one of the worst-hit countries when it comes to breeding misinformation via WhatsApp. India is not on the list of countries to get this feature, but the company might likely roll it out for its Indian users sometime later.

WhatsApp has added plenty of features to curb the spread of misinformation on its platform in recent years. In 2018, the Facebook-owned company had added forward labels before that to fight fake news. Up next, its users in India were restricted to forward a message only to five people at a time. Again, during the early months of Covid-19 crisis, WhatsApp limited message forwarding to only one contact or chat at a time.

Misinformation is not limited to WhatsApp or any specific social media platform. But WhatsApp is a more sensitive breeding ground as it has a vast user base of daily active users that chat, interact using the app. The information on WhatsApp forwards does not appear on a public domain, which makes it even more explosive.

While limiting forwarded messages makes it easier to track the source of false information and somewhat limit the pace its spread, adding a fact check button will help better in its identification.