The latest version of WhatsApp lets you handle calls better

It lets you hang up the current call before accepting another

WhatsApp is known for receiving minor but steady feature updates every now and then on Android and iOS devices alike. In the most recent stable update (version 2.19.352) of the Android app, WhatsApp has received a partial ‘call waiting’ feature. It has also received a fix for the battery drain issue that has reportedly been plaguing many devices running WhatsApp of late. The popular messaging app received similar support for call handling on iOS a couple of weeks ago. You can read more about that here.

WhatsApp’s changelog for the latest stable version on Android reads, “Added call waiting support so you can choose to accept an incoming WhatsApp call while you’re already on another call.” But this feature on WhatsApp is merely a notification for the second incoming call, rather than call waiting in its most typical sense. On regular calls where call waiting is enabled, you can accept a second incoming call while placing the current call on hold. You can then effectively juggle the two calls as you please while having one on hold. 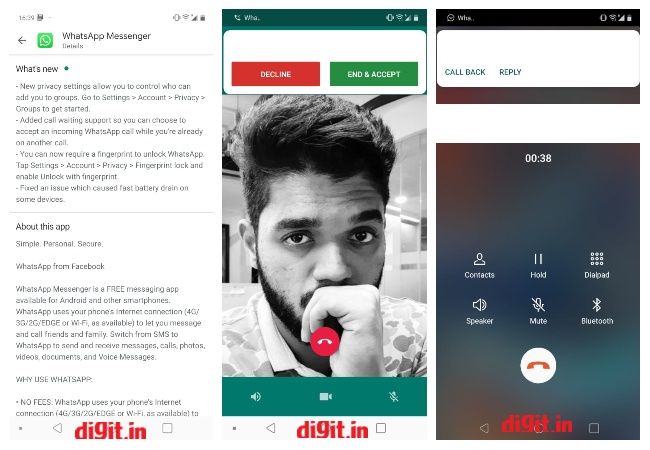 On WhatsApp, however, the second incoming call gets a notification with two action buttons: ‘Decline’ and ‘End & Accept’, but no option to place one on hold. Considering the fact that, until now, the second incoming call was disconnected abruptly without notifying the user, this is a step up in the app’s usability. This new notification works with WhatsApp calls but not with regular calls. A second incoming regular call (made through the phone’s default dialler app, that is) appears only as a missed call over the current WhatsApp call.

A few weeks ago, many users complained of increased battery drain on their phones. Many of them were OnePlus users. The cause for this drain was identified as a buggy WhatsApp update. The Facebook-owned messaging app company, which sent out a fix for the issue soon after, has finally recorded it in the changelog of the latest update. The changelog also finally includes the fingerprint lock feature and group privacy settings, which were rolled out a few weeks ago. You can read more about those features here and here.