Seems like WhatsApp is rolling out the calling feature for select desktop app users.

Earlier this month, WhatsApp was spotted testing the video and audio call feature on the WhatsApp desktop beta app and seems like it has started rolling it out to a few desktop users. It was in October when the calling feature for web and desktop app was first spotted in the WhatsApp Web client version 2.2043.7.

As per a new report from WebBetaInfo, some users on WhatsApp desktop interface now have voice and video call buttons in the chat header. This is the first time multiple users have tweeted about the update, which makes it likely that the update has started rolling out to select users. The video and voice buttons are still labelled as 'Beta', which could mean that the feature is still in the testing phase and might not see a mass rollout yet. The screenshots shared in the report show that a pop-up window will appear when you've logged in WhatsApp on the web. 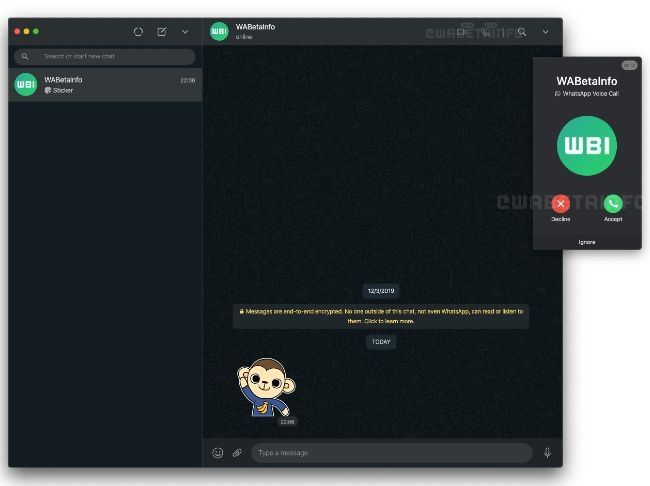 The pop-up shows options to accept or decline the incoming call. For an outgoing or received call, users will get to see mic, camera, options and red coloured end call button like the mobile app.

With the number of reports pouring around the calling feature for WhatsApp desktop app and web, the feature is very likely to arrive sometime soon. It should work similar to how users make audio and video calls using the mobile app, but it's said that it will allow you to use external mics and webcams for better quality audio and video.

The calling feature was first introduced on the mobile app in early 2015, which was later updated with video calls in late 2016. The WhatsApp Web was also introduced in 2015, but the calling feature was long-awaited especially because Facebook Messenger already has audio/video calling from quite some time. Note that messenger allows you to call without needing a phone, but WhatsApp web is said to work only if the phone is connected to the internet and paired with the desktop.