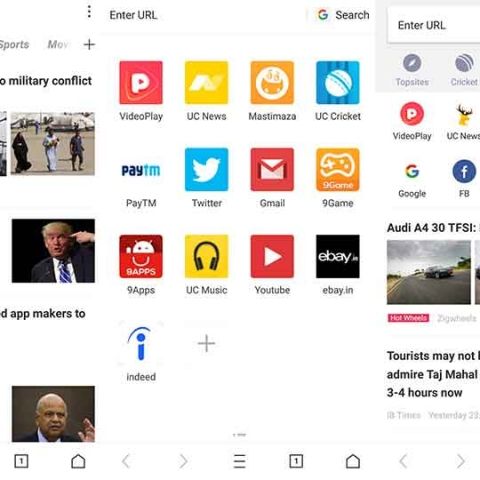 One of the several verticals of China’s Alibaba Mobile Business Group, UCWeb released a new version of their highly popular mobile web browser – UC Browser. The latest version adds a cleaner UI and few features – the most highlighted one being a dedicated news feed right inside the browser. Another big announcement coming from the mobile browser giant was their partnership with Colors TV to create multiple engagement platforms to bridge the gap between fans and celebrities from popular shows from the channel.

UC Browser has come a long way since its launch and has been enjoying its glory as the most popular mobile web browser since a couple of years in India. According to data from StatCounter, it holds a staggering 48.53% market share among the top mobile browsers in India, suggesting that almost half of the mobile browsing in India happens through UC Browser. The company says the browser witnesses about 80 million monthly active users as well. Although they were riddled with privacy and security problems the previous year, they managed to resolve these issues later. We got a chance to have a chat with Kenny Ye, Managing Director of UCWeb, who gave us a complete walkthrough about how they continue to keep UC Browser on the top. To cater to the already huge and growing number of users, a new version of the browser was released.

As mentioned above, the most popular feature coming from the new version is the integration of UC News inside the browser. Launched a couple of months back, UC News served as an independent platform for trending and curated news. Users could select from more than 20 channels or topics and have a feed curated according to their preferences. Now, the same can be done right inside UC Browser. It’s quite a convenient move for the company and expected after their usage data showed 73% of their 80 million monthly active users to be “News Feeds Consumers”. Now, existing users of the browser don’t need to use a different app to read news anymore. The new version also sees an overhaul in its user interface which looks cleaner and easier to browse. Among the little highlighted features, the browser now has a night theme and you can also set a wallpaper.

After laying down all the details about UC Browser’s newest version, the company went on to announce their partnership with Colors TV, supposedly India’s leading entertainment TV channel. This partnership revolves around the channel’s four popular shows – Jhalak Dikhla Ja, 24, Bigg Boss and Comedy Nights Live. They plan on developing multiple platforms where users and celebrities from these shows will be able to engage with each other. The idea is to create a convergence where fans could visit to watch exclusive content such as blogs and behind the scenes videos from popular shows and gain personal experiences from their favourite celebrities.