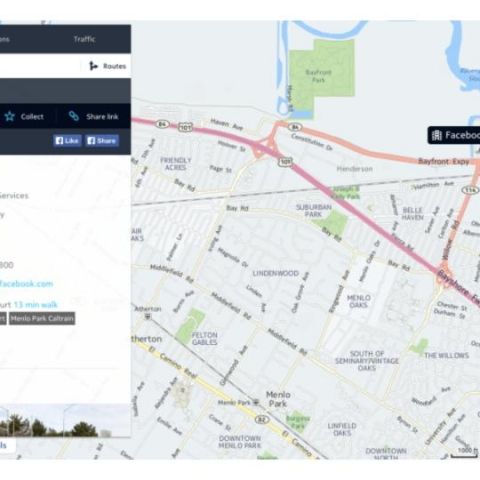 Facebook has reportedly partnered with Nokia to power the social networking sites mobile, Messenger and Instagram map service through HERE maps. The development comes at a time when Facebook is being rumoured to among top contenders to purchase Nokia's Maps services.

Users will be able to see a Nokia HERE logo on the bottom left corner, when they wish to tag someone’s location or share their own through Facebook's mobile website. The new integration hasn't been rolled out to Facebook’s native apps yet. A Facebook representative confirmed that the company is currently testing the service and it may be launched on Android, iOS and Windows Phone later this year. Facebook says that it will give the service, "more control and flexibility in delivering a consistent maps experience."

The integration could be a testing ground for Facebook, if it plans to buy the service in the future. HERE maps would provide Facebook users, a better experience as they wont have to go to Apple or Google maps for geotagging pictures or friends. The integration would also help in Facebook generating advertising revenue from location based services. The companies are also working together on Facebook's Internet.org initiative.

Although the companies have not given an official statement about the integration, a Facebook rep is quoted as saying, “We are testing Nokia HERE maps across Facebook to give us more control and flexibility in delivering a consistent maps experience. I can confirm that we’re testing HERE maps in Android versions of some of our standalone apps like Instagram and Messenger as well.”  A Nokia spokesperson stated, "We’re excited that our maps can be enjoyed by Facebook users".

Earlier this year, Nokia had confirmed that it is looking for a potential buyer for its HERE maps service. Although the company has not confirmed the financial details about the deal, a report has quoted that Nokia expects to sell the company for around $2 Billion. However, industry experts are stating that the company could raise double the amount due to its successful mapping service. According to rumors, apart from Facebook, other companies including Apple, Samsung, Yahoo as well as taxi sharing service Uber are interested in acquiring Nokia HERE maps.