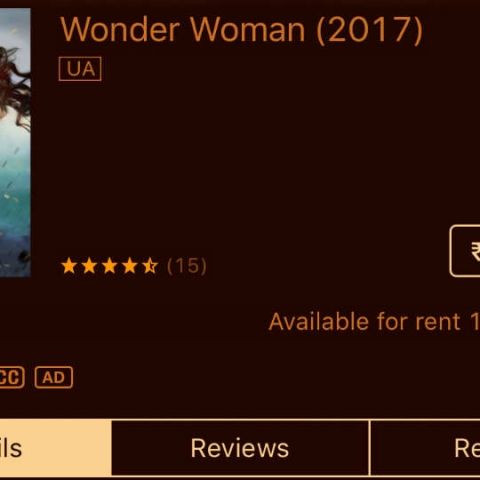 Apple has started upgrading movie titles on the iTunes store to 4K and Dolby Vision in select markets, including India. The move comes days ahead of the final availability of the newly launched Apple TV 4K. As of now, only a select few titles are being offered in 4K.

Some of the 4K titles available on iTunes include, John Wick, La La Land, Wonder Woman and more. Besides these titles, Apple TV 4K will also stream 4K, HDR and Dolby Vision content available on streaming services such as Netflix, Amazon Prime Videos (4K coming soon) and more. As per reports, Apple will increase the number of 4K titles over the next few weeks.

With 4K, you get more pixels on the screen and with HDR10, you get better quality pixels. In addition, the Apple TV 4K also supports Dolby Vision, which is essentially a premium form of HDR10, with more future proofing. Dolby Vision offers a 12-bit colour depth as opposed to 10-bit on HDR10. Further, Dolby Vision carries support for up to 10,000 nits peak brightness, while HDR10 can support upto 4,000 nits, meaning that the former is much more brighter than the latter. There’s also a new Siri remote that will be bundled with the streaming box.

The streaming box will come in two storage options - 32GB and 64GB. It runs on Apple’s A10X Fusion chip. The Apple TV 4K will be made available in India at a starting price of Rs 15,900 and pre-orders for the device are expected to start soon, with final availability set for September 22.