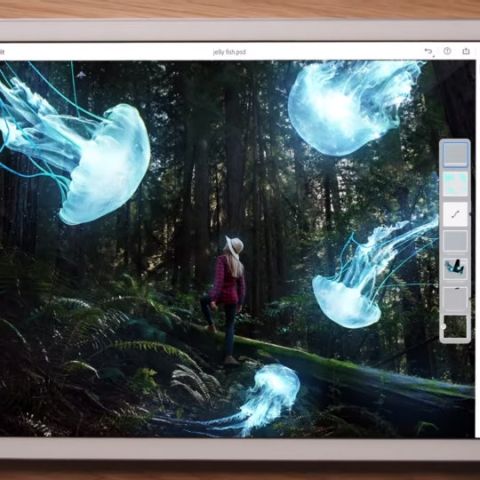 At the Adobe Max conference on October 15, the company announced that the full-fledged version of the Photoshop CC will finally be making its way to Apple iPads in 2019. Adobe also demonstrated a new drawing app called Project Gemini, which is built on Photoshop and is a dedicated drawing and painting app for the iPad. While there have been lighter versions of Photoshop on the App Store, they didn’t quite cut it. However, the upcoming app is said to run “using the real Photoshop code,” and same as the desktop version, it will save files in the .psd file format.

The app will sync with the desktop version and one will simply be able to pick up where they left off on their desktop without needing to export or import files. The company will be releasing a smaller set of features for the app on the iPad first for the 1.0 version and gradually keep adding new features over time. One will find the same tools as Photoshop for desktop but of course, there will be some changes to the UI as it is being redesigned for working with touch-based gestures.

Pam Clark from Adobe writes in a blog post, “When you open it, you’ll find a toolbar with the core iconic tools and powerful layer system for advanced control. You’ll also find selections and masking, filters, adjustments, and much more. But we’re completely rethinking the user experience for a modern touch device. You’ll find it familiar, but also adapted in smart ways for the device. We’ve designed Photoshop on iPad with natural touch gestures in mind to speed up workflows.”

Alongside Photoshop CC, the company also announced the Premiere Rush CC video editing app. It is now available on desktop and iOS, with support for Android coming later in 2019. The app will enable users to edit, colour correct, handle audio and motion graphics with a UI that is said to be consistent across desktop and mobile. It comes with a one-click auto-duck feature for adjusting music and sound normalisation.

As mentioned earlier, Adobe has said that the Photoshop CC for iPad and Project Gemini will be made available in 2019. Since it is being made available for the iPad, it can also be rolled out for Android devices in the future.