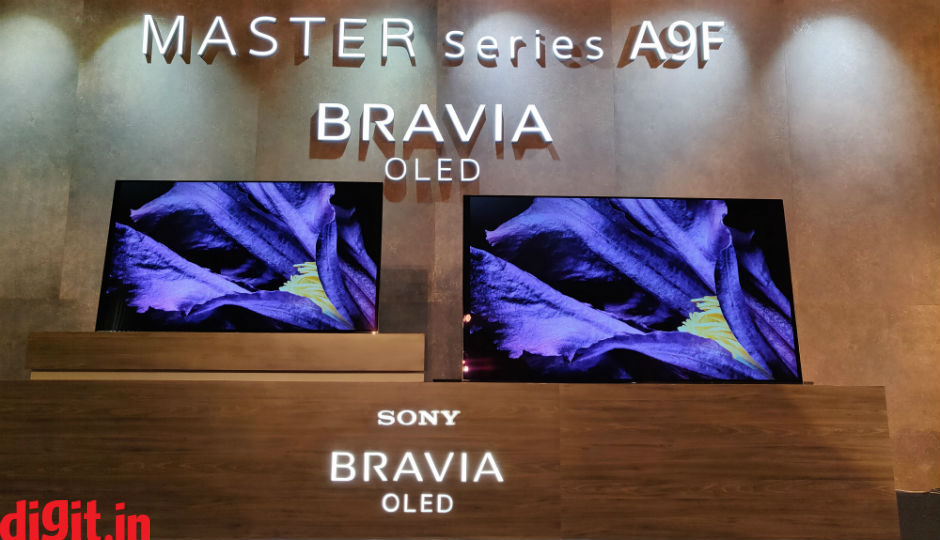 Its been a little over three months since Sony launched its A8F OLED TV in India and if you were planning on picking up a flagship TV this year, you have one more option to chose from. At the end of July, Sony announced its A9F and Z9F Master Series TVs at an event in New York. Today, the Japanese electronics giant launched the A9F in India. The TV is available in two screen sizes – 55-inch and 65-inch, priced at Rs 3,99,990 and Rs 5,59,990 respectively. The A8F is still available in 55 and 65-inch models, priced at Rs 2,50,000 approx. and Rs 3,50,000 approx. Sony’s original OLED TV the A1 has been phased out. 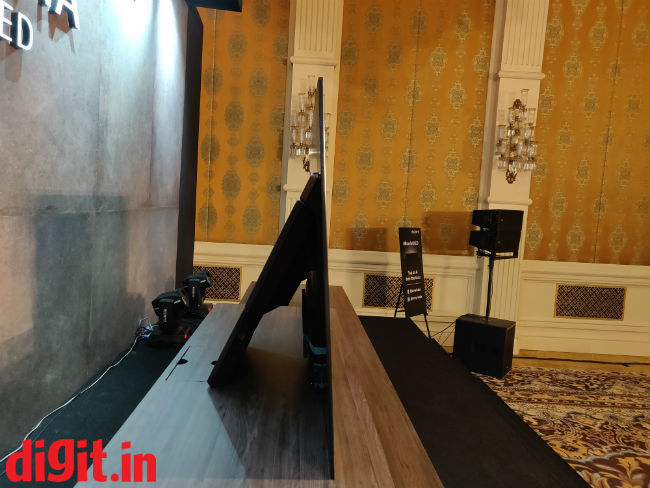 The biggest change with the A9F is with the chipset powering it. The A8F was powered by the X1 Extreme chipset and the new A9F is powered by the X1 Ultimate chip. The X1 Ultimate is said to be twice as powerful as the X1 Extreme and will bring with it better picture processing along with smaller object based HDR rendering. What this means is that each individual small object is recognised, and the colour, contrast and sharpness is adjusted for each individual object. So, in the past, if there was a bundle of grapes on screen, the bundle was considered as one object to render. Now, with the X1 Ultimate, each individual grape is a separate object that will be rendered. In theory this sounds like fantastic optimisation for HDR implementations. We will however, hold onto our final judgement till we review the TV. 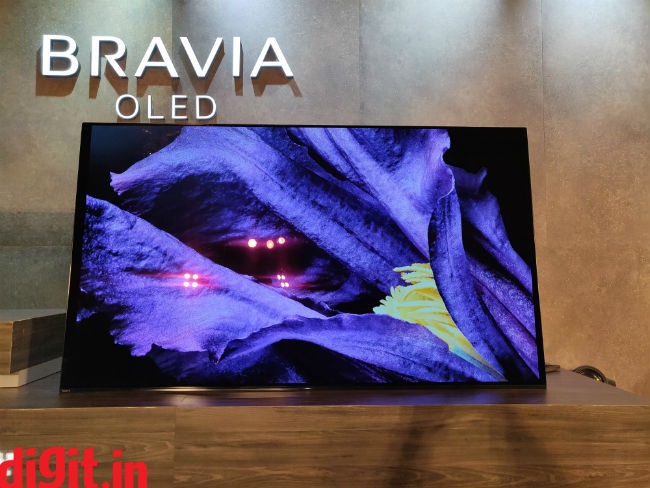 Moving on, Sony has partnered with Netflix for a Netflix Calibrated Mode. So, if you watch Lost in Space, Dark, Stranger Things, DareDevil, or any other Netflix show, in the Netflix Calibrated Mode, from the built in Netflix app, you will see the content in the exact brightness, saturation and contrast as intended by the creator. We couldn’t see this mode in action at the launch event, so we will talk more about it when we review the TV.

As far as picture quality of the A9F is concerned, it is too early to draw any conclusions. However, at the event, Sony did show us a side-by-side comparison between the older A1 and the A9F, highlighting the benefits of the X1 Ultimate processor. We also got a quick glimpse of a Blu-ray of Thor Ragnarok and the picture quality looked detailed, colourful and vibrant. We got to see a bunch of standard demo videos which showcases a night city skyline and as you’d expect from an OLED TV, the image quality was breathtaking. We will, however, play our set of test files on this TV and talk more about the picture quality in our review. The TV supports 4K along with HDR 10 and Dolby Vision. It will also support 1080p content along with SD. How well the X1 Ultimate chip handles upscaling of non-4K content is also something we will talk about in our review. 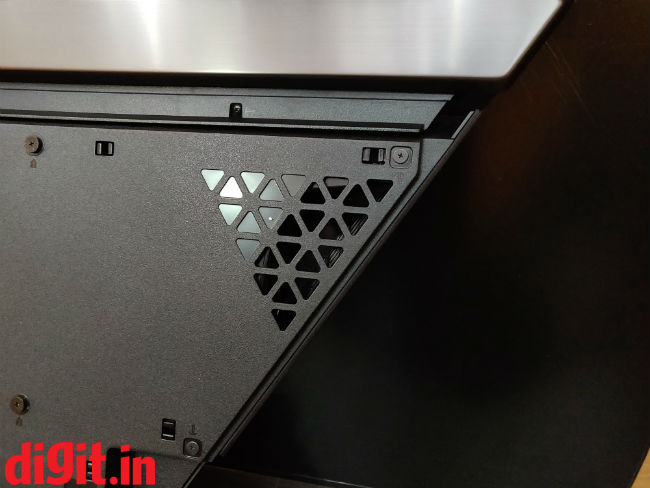 A closeup of the subwoofer

Coming to the design, the A9F has the same picture frame stand we saw on the A1 OLED TV. We asked Sony why they went back to the A1's design and the answer we got was that in order to implement the new Acoustic surface Audio+ technology, they needed to resort to this design. The A9F now has three actuators instead of 2, and 2 subwoofers instead of 1, to add more immersion to the sound. The 3 actuators help with dialogue. If you have two speakers, one on either side of the TV, then you can use the TV’s speaker as a centre channel. This will work well for those that have a 5.1, 7.1, or any other home theatre setup. At the launch event, Sony did give us a demo of this feature in action. We first saw a clip with the centre channel of a home theatre and after that the centre channel speaker was replaced with the TV. The experience sounded good and I’m not sure if this was because of the quality of the centre speaker in the home theatre, but the vocals did sound a little more pronounced when using the TV as the central speaker. We will however, do our best to test this out when we review the A9F. 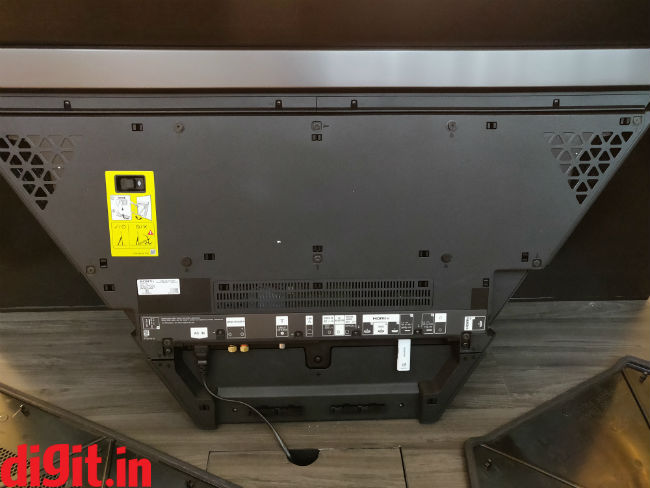 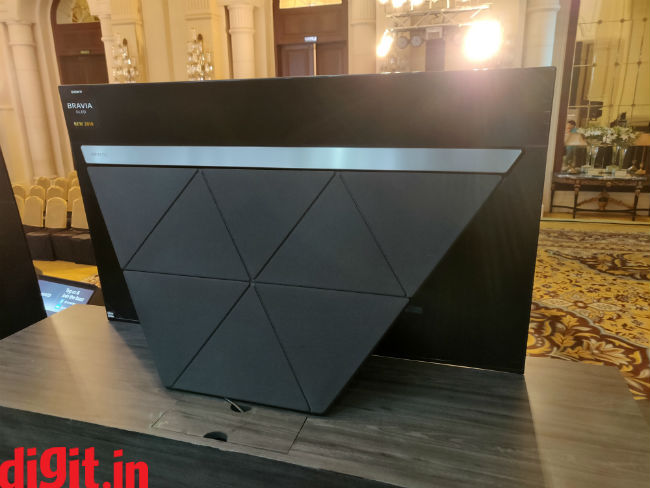 The Sony A9F runs on Android TV 8 Oreo out of the box with Google Assistant integration. You don’t need the remote to control the TV anymore. You can simply say “OK Google, play stranger things on Netflix” and it will do just that. You can also say things like “OK Google, Switch on the lights” and if you have a smart home setup that works with the Google Assistant, then the same will happen. Basically, anything your Google Assistant can do, this TV can do for you. The TV is also compatible with Amazon Alexa which is nice if you have an Alexa-enabled Echo speakers to pair the TV with.

The rest of the features of the TV are pretty much what you’d expect. Four HDMI inputs, two USB inputs, the standard array of video inputs and audio outputs. The only bummer is that Sony still gives you only two HDMI ports which are full bandwidth.

Overall, the Sony A9F looks like a promising proposition for those looking to invest in a flagship TV for their home theatre setup. The added benefit of using the TV as a centre channel is nice for home theatre enthusiasts. The hands-free nature of Google Assistant will ensure you aren’t scurrying around to find the remote and the new Android TV OS promises to be smoother than its predecessor. Two full bandwidth HDMI inputs may be a disappointment for those with more than two compatible devices. We will hold off on our final verdict of the TV till we put it through its paces.