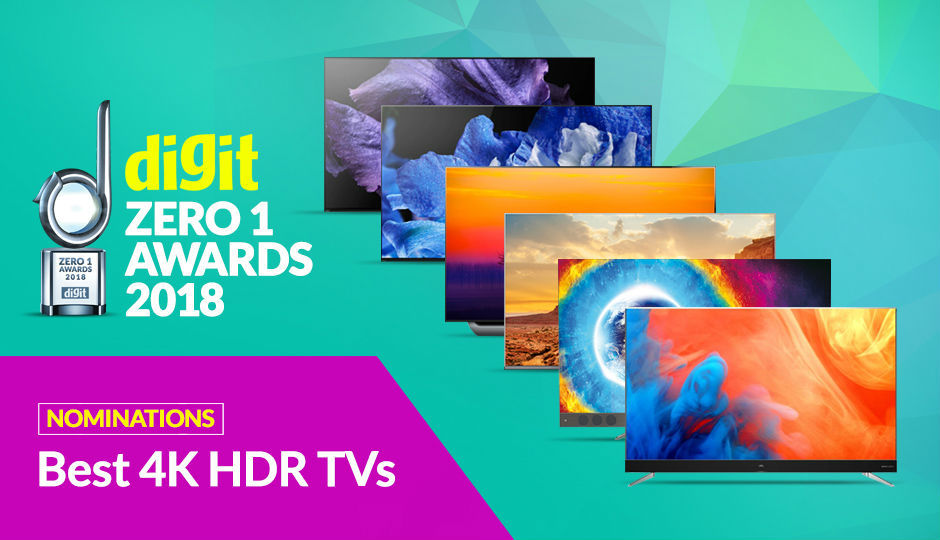 For the past 17 years, Digit has been recognising the best of the best in consumer electronics with the Zero1 Awards. Digit’s Zero1 Awards are given out to the best performing gadgets of the year, in an effort to remind you of what you should consider buying – if you’re the type that has to have the absolute best gadgets in terms of performance.

The category of TVs have evolved a lot in 2018 and CES, at the beginning of the year, set the benchmark for features to come. We are now at the end of 2018 and I am happy to say that a lot that was predicted at the beginning of the year has come to pass. AI has made its way to the idiot box, we are now in the third generation of OLED TVs and you can control your smart gadgets from the comfort of your TV. In India, we have also seen a growth in the number of brands launching 4K TVs on a budget and trying to give you features otherwise reserved for the rich. These nominations bring with them outstanding picture quality, impressive smart features and a design that ensures the TV is a piece of art in your house rather than a black mirror on a wall.

We have seen some great TVs from numerous brands this year, however for performance we are reserving our judgement for the best that money can buy!

AND THE NOMINEES ARE!!

A part of Sony’s Master Series, the A9F brings with it improved sound when compared to other OLED TVs, Android 8 TV out of the box, the ability to use the TV as the centre speaker in your home theatre setup and live life like a couch potato because the TV can control all your smart appliances. The TV has a resolution of 4K with support for HDR 10 and Dolby Vision. It also comes with a voice remote control out of the box and a simple to use UI. For audio, it has the second generation acoustic surface.

The other offering from Sony is the A8F. Put simply, this is last years A1 in a new body. It has the same OLED display, same acoustic surface audio but an all new design. It takes a great product and makes it that much better.

LG’s C8 OLED TV is a 4K TV with support for HDR 10 and Dolby Vision. The TV also boasts of LG’s WebOS and AI capabilities. The TV brings with it a sleek design, 4 HDMI 2.0 capable ports and picture presets that ensure your content looks great out of the box.

The Pansonic FX800D has an IPS panel giving it good viewing angles, a slim design and support for 4K along with HDR 10. The TV also boasts of local dimming to give you deep blacks and great overall visual output.

QLED is a technology mostly found on Samsung’s TVs however we have a TCL TV running on Android  boasting of 4K and HDR support. The TV runs on Android TV which is good. The kicker is that this TV has a 65-inch panel whereas the rest of the contenders on this list we tested were 55-inch variants. To be clear, the other models are available in 65-inch but we tested the 55-inch ones.

If size matters, then we have the iFFALCON 75H2A. The TV also runs on Android, boasts of 4K and the one we have for testing is the 75-inch variant.