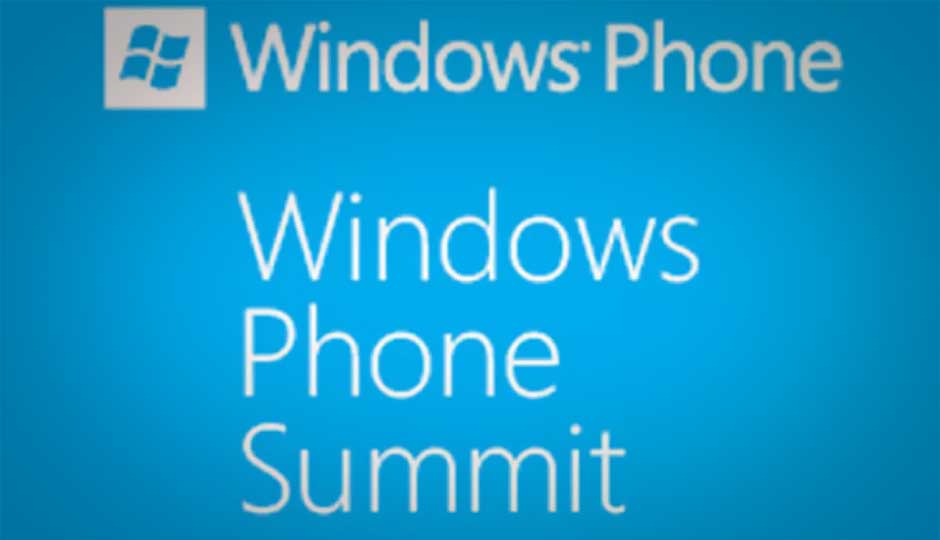 The company introduced many new features of the new platform, dispelled a few myths, and detailed some previously seen enhancements, as well as the requisite developer frameworks.

When the Redmond giant first started out with Windows Phone (in the days it was called WP7S), the company apparently aimed to deliver a personal, relevant, and connected experience to the Windows Phone user. That journey has culminated in Windows Phone 8, with Windows 8 convergence, new UI, deeper multitasking, wider developer support, and more.

Importantly, Windows Phone 8 was variously described at the event as launching this American fall (close to the Windows 8 launch), and this Holiday season – and it seems Microsoft’s not going to be much clearer at this point. They did say Windows Phone 8 hardware will be available in more than 180 countries (apparently 25 more than the iPhone markets), and in roughly 50 languages. Visit the source link for images of the event.

1) Multi Core Chipset Support
Not much information was given at the summit on this front, apart from multi-core support beginning with dual-core chipsets. Nokia, Huawei, Samsung and HTC will be using current generation Qualcomm hardware to power the first wave of Window Phone 8 handsets. Microsoft is apparently hoping to showcase dual-core devices (we expect Snapdragon S4 Krait) by the American fall. The OS was laughingly said to be optimized enough to run on a 64-core chipset.

2) Internet Explorer 10
Certainly not the most important of the announcements, a browser nonetheless does make up a large part of the average smartphone experience, and Microsoft promises functionality almost at par with the desktop version, with the same HTML rendering, and features like SmartScreen anti-phishing. The company claims to have benchmarked (SunSpider) IE10 against other native browsers on iOS 5 and iOS 6 beta (on an iPhone 4S) and Android 4.0 Ice Cream Sandwich (on the HTC One S and Samsung Galaxy S III), and beat them hands down. 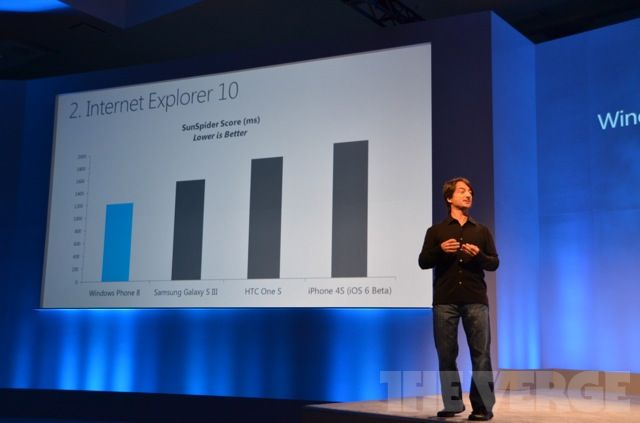 3) Native Code
While till now, up to Windows Phone 7.5 Mango, Microsoft had been limited to Windows CE as the core kernel for Windows Phone devices (ARM-based), with Windows Phone 8, the company will begin using a “Shared Core with Windows.” This extends a little further than we’d heard from the earlier NT Kernel for WP8 announcement. With the same hardware drivers, the Shared Core will also enable "hardware-based security", and other enterprise level features, directly from Windows 8 to WP8. In terms of networking, WP8 will support IPV6, NFC, and up-to-date Bluetooth support.

For graphics, and game development, the WP8 platform will use hardware-accelerated Direct3D. App and game developers will in essence get a common platform between Windows 8 and Windows Phone 8, allowing them to port their creations in a much shorter time. The users, of course, will then get more apps on the platform. Native game development platform will be based on Direct X. (More on this, in the Developer and Other Important Announcements section).

4) MicroSD Card Support
A seemingly obvious feature absent from Windows Phones since their first WP7 iteration, Microsoft is finally adding microSD card support with Windows Phone 8. The SD card will be usable for storing and accessing images, music and videos, as well as for “installing apps.” More details about this last will hopefully be revealed before launch day.

5) Native NFC and Mobile Wallet Support
Windows Phone 8 will support NFC natively, being used in everything from its mobile wallet system, to sharing and synchronizing apps. The mobile wallet system, called the “most complete wallet experience” by Microsoft, will feature support for credit and debit cards, as well as loyalty and membership cards. It will be able to access saved deals, and supports NFC ‘Tap to Pay.’

Unlike Google’s system, Microsoft says WP8’s mobile wallet will be supported by carriers themselves, with a Secure SIM system. With or without carrier support, the Wallet Hub will be featured on every Windows Phone.

6) Nokia Maps
All Windows Phone 8 devices will feature Nokia Maps (pretty much in line with what we’d heard about the original Microsoft-Nokia agreement), powered by NAVTEQ data. It will offer turn-by-turn voice navigation, offline map support, apart from map control for developers.

Also improved in this space is Local Scout, which will be able to list deals alongside location-based business listings. Nokia Lumia devices will get their own exclusive improvements however, from photo uploading, to place reviews and favourites sync. A location pinning feature will be available on the Nokia Transit start menu, and Nokia Drive will get the My Commute feature, starting from Live Tile information, to route selection and estimated time.

7) Windows Phone 8 for Businesses
Companies and IT administrators will find the Windows Phone 8 enterprise level features to be quite exciting, as Microsoft promises direct Windows 8 level device management, customized and closed app stores, and more, apart from the earlier mentioned hardware-based security features. With the ‘Shared Windows Core’, administrators will also be able to provide encryption and secure boot features. Full-fledged Microsoft Office and other Microsoft cloud networking apps will of course, also be available. Businesses will also be able to use a Company Hub app, to deliver all shared information, news, apps and more. Templates will be at hand, to facilitate an easy setup. 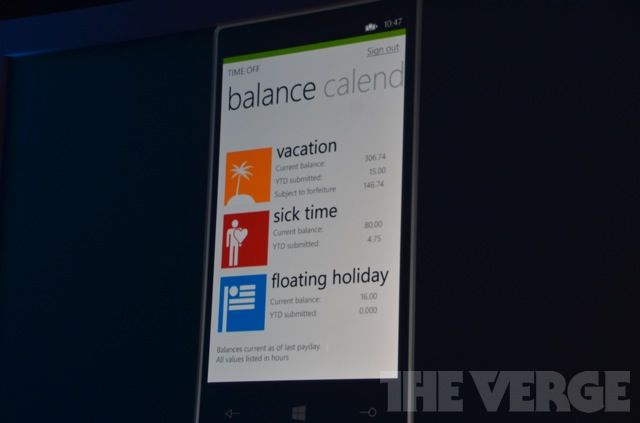 8) New Start Screen
The new Start screen on Windows Phone 8 will allow users to create their own customized home screens with greater ease. They will be able to resize their Live Tiles into large, medium, and small sizes. Developers will not need to provide scaling in their apps, it will work natively. This is also where Microsoft made one of its biggest announcements, Windows Phone 7.5 apps will work on WP8. Microsoft will also be allowing for greater colour customization of the Start screen. 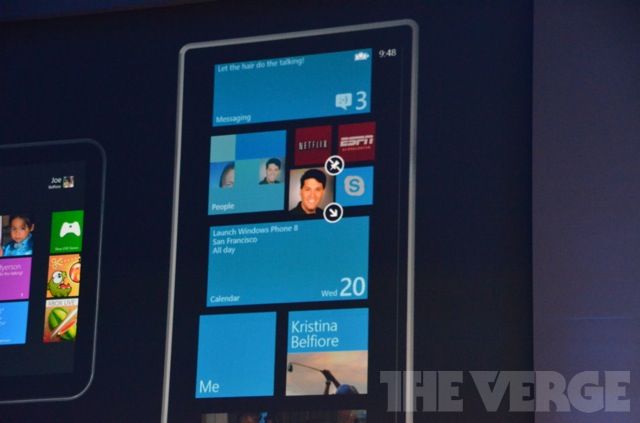 Developer and Other Important Announcements

A) Update Path for Mango Users
Windows Phone 7.5 users will not be able to upgrade to Windows Phone 8 on their devices, in other words, your old Windows Phone hardware will soon be officially outdated. However, Microsoft is vowing to provide a Windows Phone 7.8 update to these users. The only announced new feature (at this event, for this update) so far seems to be the improved Start screen interface, though we expect many of the Apollo and Tango features we’ve been hearing about to accompany the update.

B) Deeper VoIP Integration
The Skype interface will be as readily available as a regular call, complete with caller ID. It will also be able to run in the background. These VoIP features will be available to developers as well, making them able to offer as deeply integrated service as the native Skype.

D) In-App Purchasing
Developers will now be able to add in-app purchasing to their creations, competing with iOS and Android on a more equal footing.

F) Speech API
Microsoft will make the WP8 Speech APIs completely available to all developers, allowing for Siri-like communicating with apps, e.g, voice instructions and notifications. The voice-functional Audible app, used to demonstrate the feature at the event, is now available for WP7.5.

G) Frameworks and Languages
Microsoft Visual Studio 7.5 and .NET will continue to be used as development frameworks, for both Windows Phone 7.5 and Windows Phone 8. Other recommended codesets include XAML with C#/VB code, native C /C, and HTML5. For those developers wanting to create apps for both Windows 8 and WP8, Microsoft recommends XAML for apps, and Direct3D with C /C code for games. SQLite engine will also be available for Windows 8 and WP8. Sharing code across iOS and Android will apparently also be much easier.

I) Shared APIs between Windows 8 and Windows Phone 8
These include everything from graphics, to audio, media, file systems, networking, inputs, commerce, base types, and sensors.

K) Featured App Announcement
Zynga will apparently bring Words With Friends and Draw Something to the WP8 platform later this year.

While most of the announcements only help the Windows Phone platform play catch-up with its other mobile OS competitors (in more ways than just the previous glaring lack of hardware support), Microsoft looks to be heading in the right direction. Along with Surface for Windows, Xbox integration, and the entire Windows 8 and Windows Phone 8 ecosystem, a convergence of devices is the obvious goal – something we’re seeing Apple do as well with iOS, iCloud and Mountain Lion.

With the host of enterprise features due in the Windows platform, and the multitudes of corporate customers already under its wing, Microsoft will surely have a very large chance of hitting it mainstream across form factors and clients. The wider compatibility between platforms will also enable the company to leverage its massive Windows software ecosystem to its still inadequate Windows Phone marketplace and XLive counterpart.