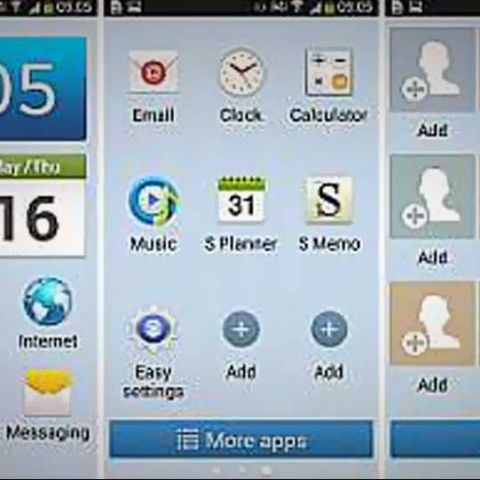 Samsung’s play on loading the phone with a whole lot of features, and then hoping that around half of them hit the mark with the user, is pretty evident with the Galaxy S4 flagship smartphone. Honestly, it has so many features that you probably should have a feature that just lists them all in one place, with a one line summary of what it does! If you are a basic smartphone user, and not very much into complicated technology, the Galaxy S4 may not don the aura of being the phone for you. However, Samsung has, very thoughtfully, included an Easy Mode in the feature set. While it may be a bit of a task for the non-tech-savvy people to get to that feature in the first place, the world becomes a much better place once you do!

The Idea Behind Easy Mode
It is probably an admittance of the fact that the Galaxy S4 is a tad complicated for the basic user. And possibly even acquiescence of the reality that Android itself may be becoming a tad incomprehensible for some users, as time moves on. But, we must be thankful that the company gave this a thought, and an option for users to get the hang of the phone, in a simpler interface. Critically, not just the simplicity bit, but Easy Mode also brings in bigger fonts and icons, making it a tad easier for anyone with eyesight issues to navigate the phone without getting lost.

Accessing Easy Mode
To get access to the Easy Mode, you need to head into settings. Select the My Device tab on the top and go to Home Screen Mode. Here, you will get two options – Standard Mode and Easy Mode. By default, the phone is set to Standard Mode, which is the TouchWiz UI with all the widgets and the icons, and all the customization you can do on it. Switching between these modes does not delete or tamper with the settings on any of the two modes.

Easy Mode – What It Is and What It Does!
Switching to Easy Mode on the S4 does bring in an entirely different look to the phone. For starters, you will notice that apart from three widgets on the main screen – clock, weather and calendar, you cannot have any more widgets. That does keep things sane and simple.

The second major change is the bigger icon size and text, which makes navigation more comfortable for people who may have eyesight problems. The font on the Standard Mode is just too small, and Easy Mode just takes care of that.

There is very limited customization you can do in terms of the apps that sit on two of the three home screens. There are the usual suspects – phone, contacts, messages, gallery, camera, email, calculator and music. Two slots are left free for users to add apps that they may have downloaded later. On the second screen, you get the More Apps option at the bottom, taking you to a basic list of all the apps installed on the phone. This is just a list, in alphabetical order, and is nothing like the horizontal or vertical scrolling app drawers on most Android phones.

One screen is limited to just pinning your contacts, the favorite or the most contacted ones, with their contact pictures being the highlight. On the bottom of the page, you can access call logs.

Bouquets or Brickbats?
While we appreciate the Easy Mode’s presence on the Galaxy S4 as an aid to help people use the phone who may otherwise have had an uphill task of even typing out a simple SMS, it is important to put this in perspective with the bigger picture. Something somewhere has gone horribly wrong, that phones now need an Easy Mode to become manageable for some users?

The operating system has to take its share of the blame for this. In the attempt to ‘evolve’, Android has become bloated and a bit too big for its own boots. It really needs to be set right, before things become even worse. Maybe for once, Mr. Sundar Pichai can focus on making an OS simpler to use, rather than more complicated!