Survey reveals, price is the biggest barrier for 3G services adoption in India Last week we asked our readers if they were using mobile 3G data in India, services once eagerly awaited in the not too distant past. We’ve received a substantial number of responses, with nearly 1,600 readers choosing to share their views.

After much deliberation, the 3G auctions concluded in May 2010, the first private 3G service began their rollout by Q1 2011. It’s been nearly one and half years since the 3G services began their proliferation of the Indian mobile data market, with a slowly growing infrastructure accompanied by a steady drop in prices.

Our poll was conducted to gauge just how well 3G services have penetrated the Indian market, and finding out what were the primary reasons that consumers shied away from them. We asked you, ‘Are you using mobile 3G services in India?’

The highest number of votes (704) was cast by readers (44%) who chose the option ‘No, it’s too expensive right now,’ plainly indicating that a large portion of the demographic for 3G services finds them unaffordable. About 16% of the votes, cast by 251 readers, chose “No, the 3G coverage in India is awful,” indicating that the telecom operators have a long way to go, at least in public perception, before they can provide comprehensive 3G cover across the major portions of the country.

Check out the poll results, in the chart below. In the meanwhile, do also answer this week’s poll, where we’ve asked you “Are you waiting for the iPhone 5 before making your next purchasing decision?” Do also check out previous weekly poll results, here. 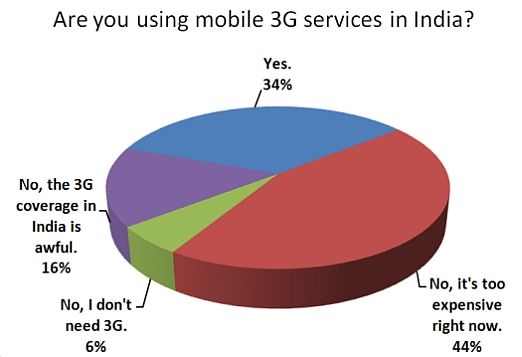