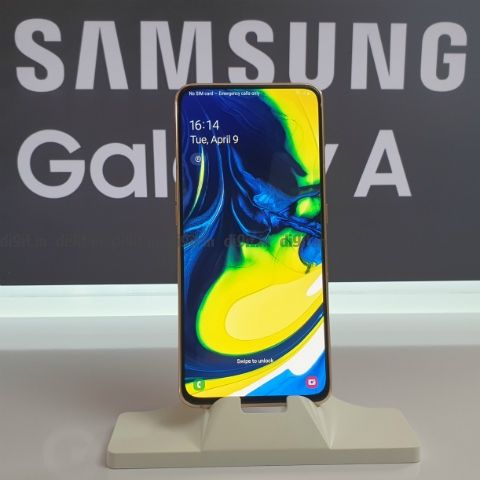 The Samsung Galaxy A80 does look refreshingly different from most other phones that came out in the past few years, but that doesn’t mean the new form factor is without its disadvantages.

Even since the iPhone X came out unleashing the menace of the notch on top of the display, the smartphone industry got divided into two camps — One that blindly followed Apple into putting a cut-out in the display, and another that strove to stay out of it. As dozens of phones with notches stand witness, the former camp with their heightened marketing efforts made the notch mainstream.

Many, in fact, defected over to the other side and adopted the notch. There were some defections from the former group as well. For instance, Vivo and Oppo initially embraced the notch in their smartphones, but by the second half of 2018, they ditched it in favour of mechanical units to house the camera, doing away with the notch, and giving us the first glimpse of how a bezel-less phone will look like.

Samsung, however, was the primary proponent of the anti-notch party, so much so, that the Galaxy S9 and the Galaxy Note 9, the two flagship phones from the company refused to buy into the notch mania, and remained wrapped in thick bezels.

Soon enough though, Samsung felt the pinch and came out with phones sporting water-drop notches, and like the new Galaxy S10, even a punch-hole in the display. But with the new Samsung Galaxy A80, Samsung took a bold step towards the future with a phone that’s both notch-less and bezel-less. The secret? Cameras that rise up and swivel over to serve as both the front and the rear cameras.

Solving the nasty notch problem with one swivel 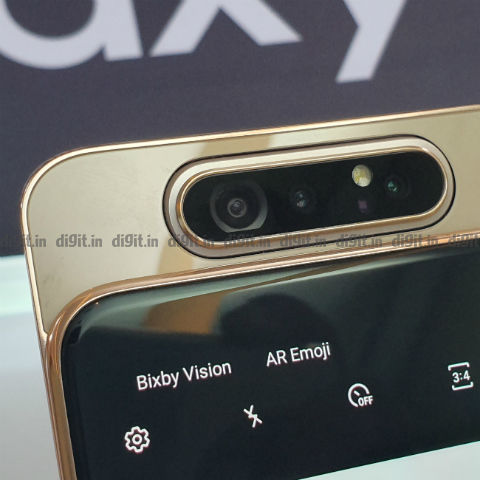 While Vivo and Oppo’s decision to use movable parts in smartphone designs certainly raised eyebrows, many weren’t convinced of their longevity. The Vivo NEX and the Oppo Find X were certainly one of the most interestingly designed smartphones last year, but there was always the question of how durable they are. Now, Vivo and Oppo have both brought down the pop-up camera design to the mid-range segment, while Samsung went a step ahead with a swivel camera in the high-end segment.

Samsung managed to solve two things at once — Stretch the screen to the edges without punching a hole or cutting out a part of the display, and use the same camera stack for both selfies and backfies (for lack of a better word), offering a consistent experience no matter how and what you shoot with the phone.

A phone tailormade for TikTok users 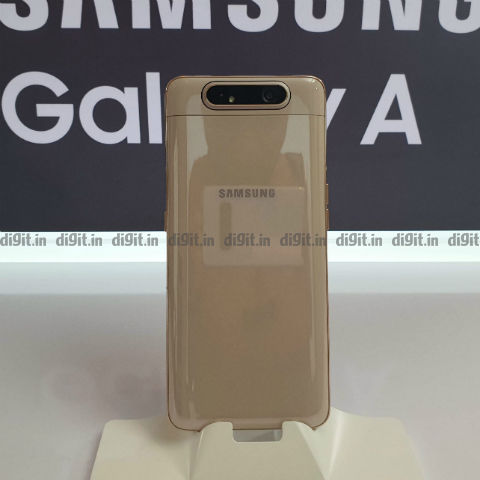 At the launch event, President and CEO of IT and Mobile Communications Division, Samsung Electronics, DJ Koh announced the Galaxy A80 is made particularly for the post-millennial generation who spend their time making short videos of themselves for popular social-media portals like TikTok, Musically, Instagram and Snapchat. Unlike Facebook, all these new social platforms center around photos and videos. The Samsung Galaxy A80, with a triple camera setup that works as both the front and the rear camera, will not feel like a compromise when switching over from the back to the front camera, which has traditionally been the case.

The Samsung Galaxy A80’s triple-camera stack houses a 48MP camera with f/2.0 aperture, an ultra wide-angle camera with f/2.4 aperture and fixed focus, and a 3D ToF sensor. All the three cameras rotate over to the front when required and serve as the front camera. The whole process takes around 1-1.2 seconds, which is a little slower than what it takes for regular phones to switch over, but that delay really doesn’t matter as most don’t instantly switch over from the front to the back in between a recording.

There’s also another feature that’s tailormade for TikTok users — Portrait Video. Called Live Focus Video in the Galaxy A80, the feature applies the same background blur in videos so that the subject remains in focus while the background is thrown out of focus. It happens courtesy the Computer Vision unit in the ISP of the Snapdragon 730G that powers the Galaxy A80 and based on our limited usage at the launch event, it worked pretty well. I could adjust the amount of blur I wanted in the video and the camera intuitively kept blurring out the background even if I moved around. The amount of bokeh cannot be adjusted after the video has been shot, though.

Slide-up and swivel all you want, the design is not without its drawbacks

The Samsung Galaxy A80 does look refreshingly different from most other phones that came out in the past few years, but that doesn’t mean the Galaxy A80’s brand new form factor is without its disadvantages. Samsung is admittedly using the A-series as a test-bed for new features and design, and provided that this design takes off, Samsung might also use the slide-up and swivel design in the next Galaxy flagship. However, there are a few challenges that Samsung needs to overcome if this is indeed used as a flagship design —

For one, it would be difficult to make this design water-resistant. A drop of water or a speck of dust can wreck havoc in the mechanical slider. In fact, the Vivo NEX and the Oppo Find X that we had in our labs are already making squeaky sounds when the pop-up and slide-up cameras are used.

It’s also difficult to say how long the slider design will keep working. We expect Samsung to do their quality testing diligently, but with a mechnical movable design, you can never know how long you have. And it’s not that movable parts in a phone are a new frontier of smartphone design. Old Nokia phones regularly experimented with movable parts. In fact, the Oppo N1 was the first phone to come with a flippable camera. And there’s a reason why the industry moved away from the design. It’s more expensive to produce and even more difficult to guarantee longevity.

Making a section of the phone movable also means the device itself will be heavier, thicker and then there’s the question of putting the phone inside a case. The Galaxy A80 does come with a case out of the box which essentially keeps the top part of the phone open for the slider to rise up, but third-party cases will be more expensive.

But all said and done, I managed to spend a lot of time admiring the seamless motion of the phone’s rear camera rising up, flipping over and becoming the front camera.