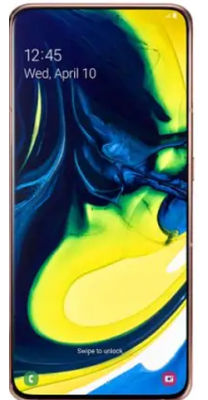 Current Best Price of Samsung Galaxy A80 is ₹ 0

Samsung Galaxy A80 runs on Android 9.0 OS. The phone has 128GB of internal storage. The smartphone is powered by 2.2 Ghz Qualcomm Snapdragon 730 processor. 8GB of RAM ensures that the phone runs smoothly even the most memory intensive applications & show no signs of lag. The phone has a non expandable 128GB internal memory. It has a motorised popup rotating main camera module featuring camera of 48 + 8 megapixel + TOF 3D camera.

The Phone comes with a large 3700 mAh battery to support it's 6.7-inch screen with Super AMOLED display having a resolution of 1080 x 2400 at 393 ppi. The phone is powerful with excellent specifications.

The phone has a 6.7-inch Super AMOLED capacitive touchscreen, 16M colours and 393 ppi. The sleep phone has a glass body which gives it a premium feel. It has Corning Gorilla Glass 3 that protects your phone against scratches and drops. It is available in Angel Gold, Ghost White, and Phantom Black colours. The phone has sleek dimensions of 65.2 x 76.5 x 9.3 mm (6.50 x 3.01 x 0.37 in).

Samsung has announced the Galaxy A80 smartphone which comes with a rotating camera. What makes the smartphone unique is its camera. The phone has a rotating camera as well as slider mechanism. Samsung Galaxy A80 camera is truly world class. It has a 48MP rotating camera + 8 MP, f/2.2, 12mm (ultrawide) camera and TOF 3D camera. It has a motorized pop-up rotating main camera module for clicking selfies. The phone has a triple rear camera setup, and once you plan to click a selfie the rear camera rotates 180 degrees from back to front to click selfies.

Samsung Galaxy A80 specs include a powerful Qualcomm SDM730 Snapdragon 730 (8 nm) processor and Adreno 618 GPU. It has 8GB RAM and 128GB internal storage. Powered by Dolby Atmos sound, the device offers an ideal gaming experience. It runs on Google’s latest Android 9.0 (Pie) out of the box.

The phone has a 3700 mAh battery and supports 25W fast charging. Users can easily charge their phone while on the move. The Samsung smartphone has 128GB of internal storage which is expandable via a microSD card slot. The phone provides ample storage for all your videos, etc.

Connectivity options included in the device are GPS, FM Radio, Bluetooth, USB 2.0, Type-C 1.0 reversible connector. It has an array of sensors including an ultrasonic fingerprint (under display), accelerometer, gyro, proximity, and compass sensors. It comes with Face unlock feature for added security.

Samsung has been trying to grab a bigger share of the Indian smartphone market and plans to launch at least 6-7 Galaxy A series phones in India this year. The smartphone maker plans to compete with Chinese brands Xiaomi and Huawei which have captured a big part of the Indian market. 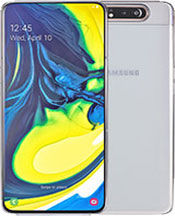 Write a review on Samsung Galaxy A80