Qualcomm announced the Snapdragon 865 earlier this month at the Snapdragon Tech Summit in Hawaii. Usually there’s a long gap between Qualcomm announcing the chipset and knowing the actual performance of the flagship chipset since OEMs take a couple of months to get their devices ready for market. But not this time.

This year, just as the Snapdragon 865 was announced on stage, we were handed reference devices powered by the flagship chipset, and with the usual benchmark apps installed. And we spent some time using the device and putting it through the benchmarks a couple of times to get the required scores. We then compared the scores against 2019’s best performing device — The OnePlus 7T Pro. Without being clickbaity, we can assure you results will leave you surprised. 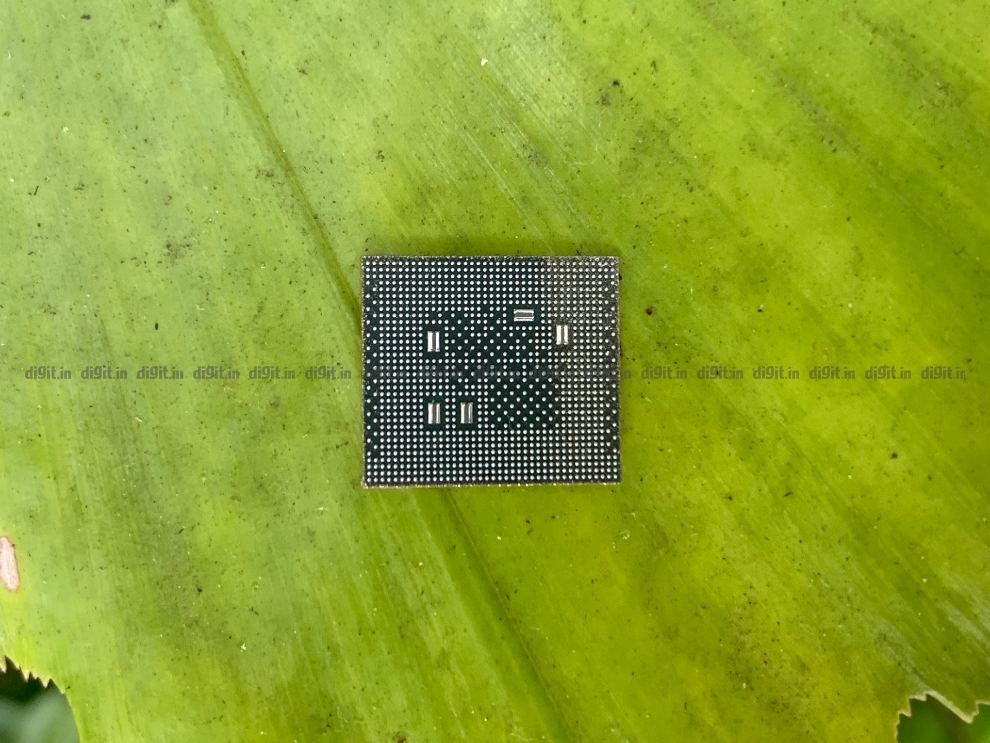 But before we get into the test-results, let’s first note down the advantages of having the Snapdragon 865 powering your smartphone —

1. The Snapdragon 865 is manufactured on TSMC’s 7nm N7P process, the same process that is used to make Apple’s A13 Bionic chipsets.
2. This time Qualcomm has retained the CPU architecture from the Snapdragon 855 and there’s a 2.84GHz prime core running on the Kryo 585, three Cortex-A77 mid-cores clocked at 2.4GHz and three Cortex-A55 efficiency cores clocked at 1.8GHz. So heavy tasks like games, 4K videos, and more will be handled by the prime core, slightly heavier tasks like editing a photo will be handled by the mid-cores, while everything else will be processed by the efficiency cores.
3. The Snapdragon 865 also uses a new displays, 10-bit HDR and 90FPS gaming. You will also get regular GPU driver updates on the Google Play Store.
4. Qualcomm claimed the CPU and GPU on the Snapdragon 865 are around 25 percent faster and 25 percent more power efficient.
5. Apart from the CPU and GPU, the Snapdragon 865 boasts of a new ISP capable of crunching 2 gigapixels per second and enable 8K video recording among other things, a new AI Engine that’s now much faster, more efficient and can do things like in-call live translation!
6. Finally, the Snapdragon 865 will have to be paired with the Snapdragon X55 5G modem, so rest assured most flagship Android phones next year will be 5G ready.

Now that we have a fair idea of the new features, here’s how the Snapdragon 865 performs —

The reference device we tested the chipset on sported a 5.9-inch 2880x1440 pixel display, 12GB LPDDR5 RAM, 128GB storage and of course, was powered by the Snapdragon 865. We ran AnTuTu, Geekbench 5 CPU, PCMark Work 2.0 and GFXBench Offscreen tests to gauge how well the chipset performs.

Here are the results — 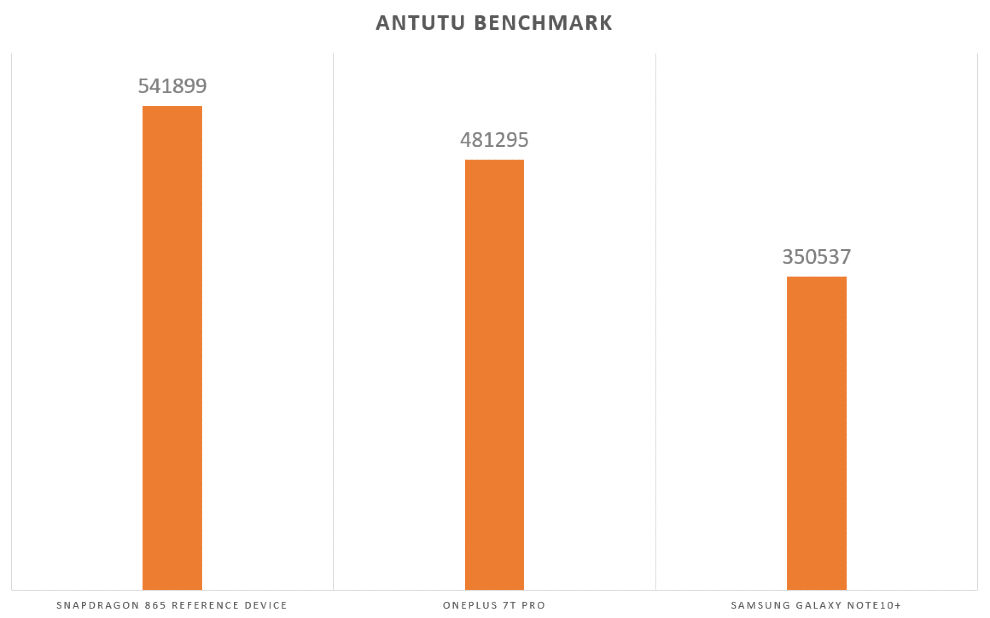 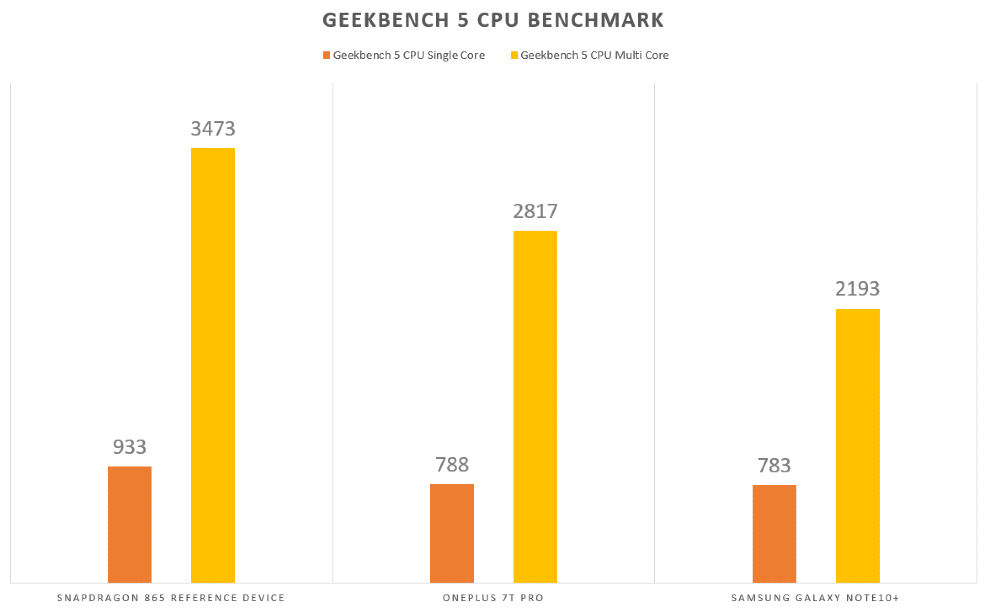 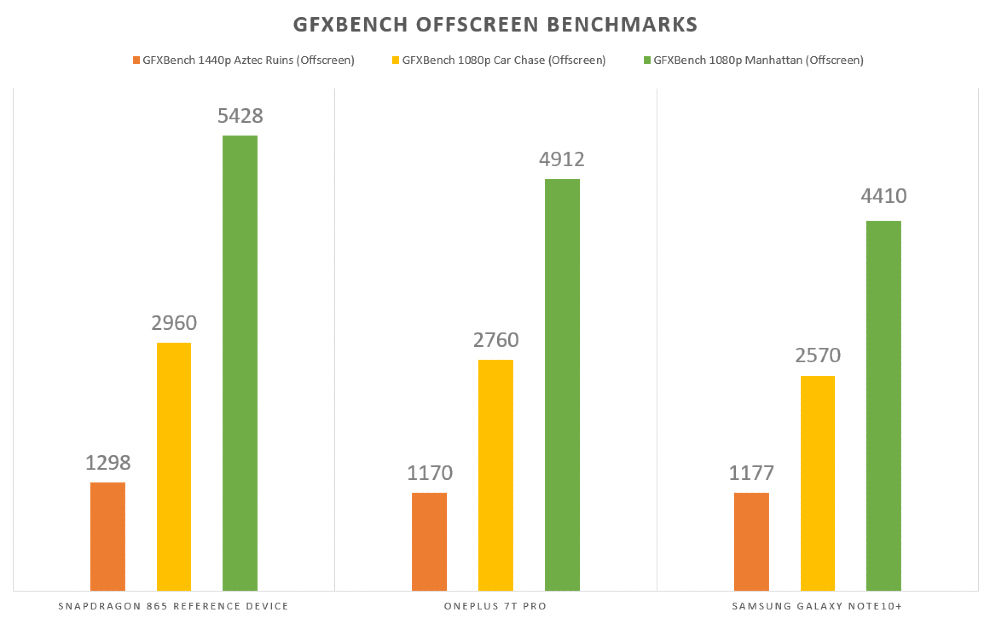