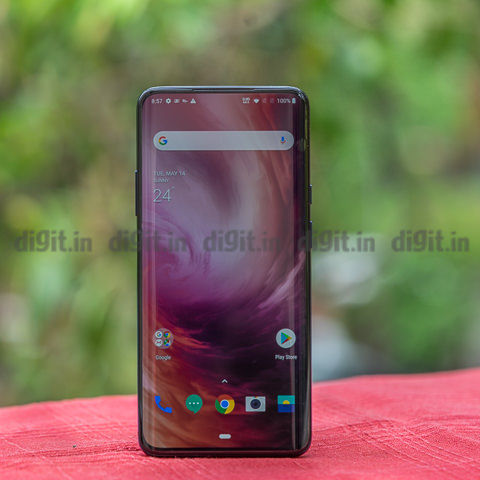 Samsung had announced that they would start production of high-capacity UFS 3.0 storage chips earlier this year, but failed to include the super fast storage in its own S10 series. The OnePlus 7 Pro is the first smartphone in India to launch with UFS 3.0 storage. This has been a pretty big feather in OnePlus’s cap, but is it worth all the hype?

What is so Special about UFS 3.0

First off, lets just get some clarity on UFS 3.0 or Universal Flash Storage 3.0. Theoretically, it is supposed to provide transfer speeds of up to 23 Gbps, twice that of the current UFS 2.1 standard. Practically, however, the numbers would be lower based on a variety of factors such as the quality of the die, the power delivery, and OS optimisations. The new standard is also supposed to draw lesser power and deliver far more stable performance at greater temperature ranges. Needless to say, it comes with the promise of not just speed, but also greater reliability. Needless to say, it’s a big deal and the hype is justified.

Does the OnePlus 7 Pro deliver?

We put the OnePlus 7 Pro, along with other phones including the Google Pixel 3a XL, OnePlus 6T, Samsung Galaxy S10+ and even the Samsung Galaxy S10e, through a few rounds of PCMark’s storage benchmark. We recorded all the individual metrics for all the devices, but for the sake of simplicity, will only refer to the scores related to the internal storage. It should be noted that the Google Pixel 3a XL is using eMMC storage, while the OnePlus 7 Pro has UFS 3.0 storage. The rest of the devices are using UFS 2.1. We started our testing with PCMark 8's Storage test and felt the results weren't all that conclusive. Therefore, we added three additional apps (Androbench, to the line-up, each of which is designed to measure the sequential read/write speeds of internal storage. Our findings are in the graphs below: 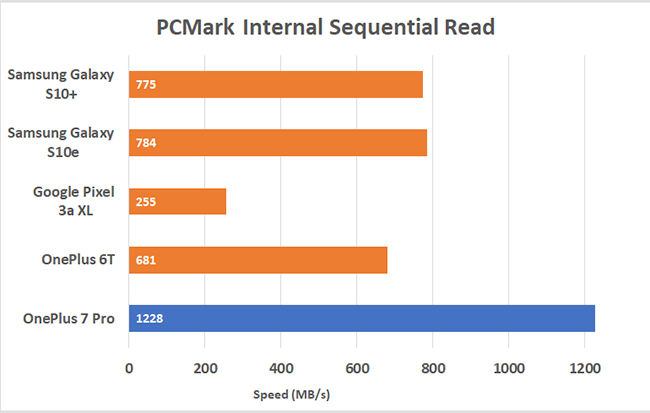 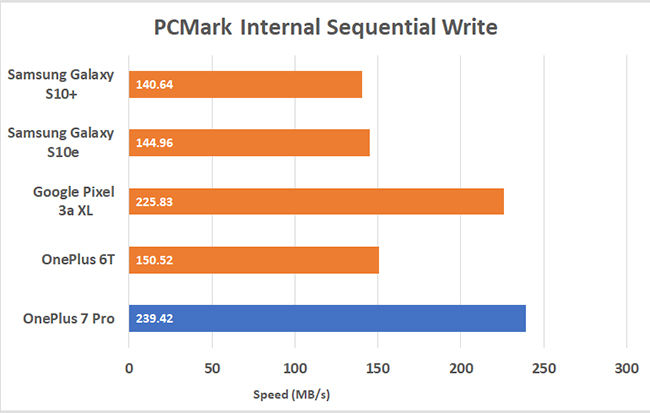 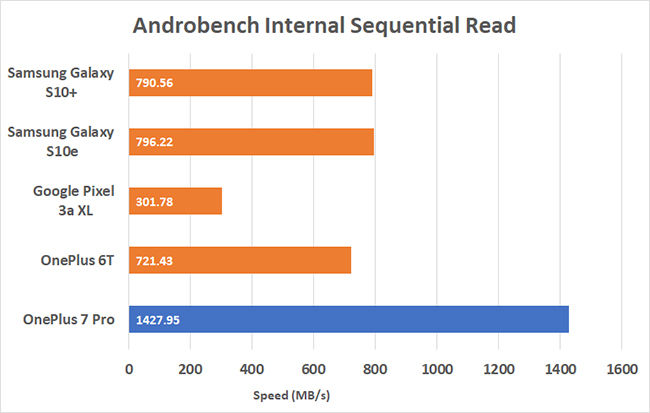 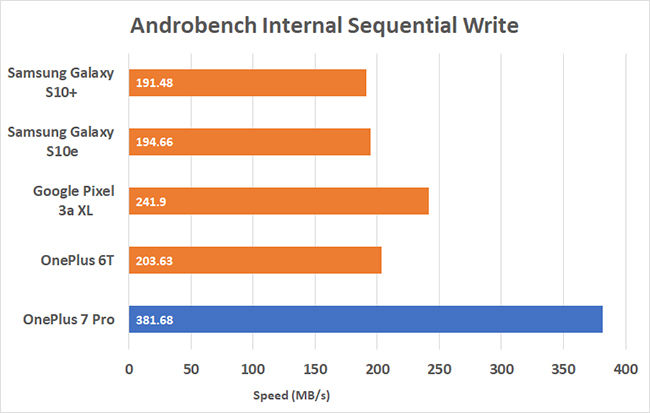 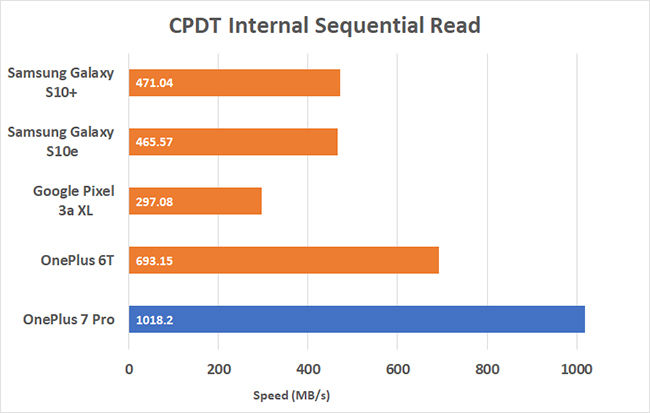 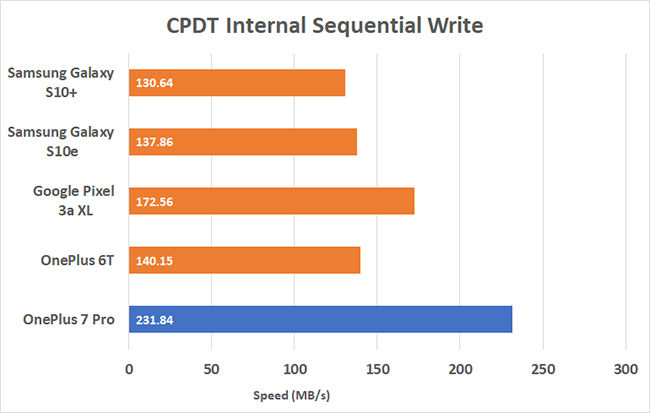 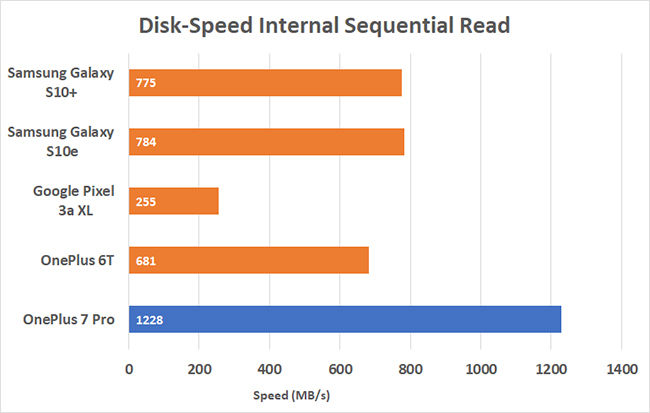 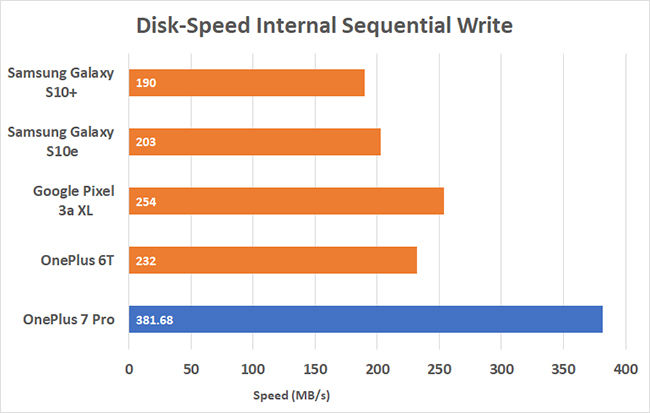 What does this mean for the OnePlus 7 Pro UFS 3.0 storage

What’s clear is that the OnePlus 7 Pro is definitely ahead of the competition in terms of sequential reads and writes, with 1161.1 and 239.42 MB/s respectively on the PCMark Storage test. The S10 duo come in a close second, the Google Pixel 3a XL being the slowest for the sequential read. However, when it comes to random reads/writes, the UFS 3.0 equipped OnePlus 7 Pro shows just about average performance. The OnePlus 6T has the fastest internal random reads while the Google Pixel 3a XL has blazing fast random writes, relatively. Across all four benchmarks, the OnePlus 7 Pro maintains a sequential read speed well above 1GBps, which is very impressive. The write-speed varied between 250 and 350MB/s

So to puts this in perspective, when you’re gaming, the game load will be a part of the sequential read process while the experience of gaming itself would count towards sequential write. In fact, all app loading behaviour would count towards sequential reads, while actions taken within the app would fall towards the sequential write. The times when random read and write comes into play is when we're moving a large number of files between two drives. However, if you were to copy one large file from one disk to another, that would be considered a sequential read/write task. The copying world isn't perfect, but we are so much better off than where we used to be in comparison to spinning hard drives.  What we see from the preliminary numbers from PCMark’s storage benchmark is that the OnePlus 7 Pro does indeed have the fastest storage, one that’s capable of reading and writing data (sequentially) faster than most other smartphones out there.