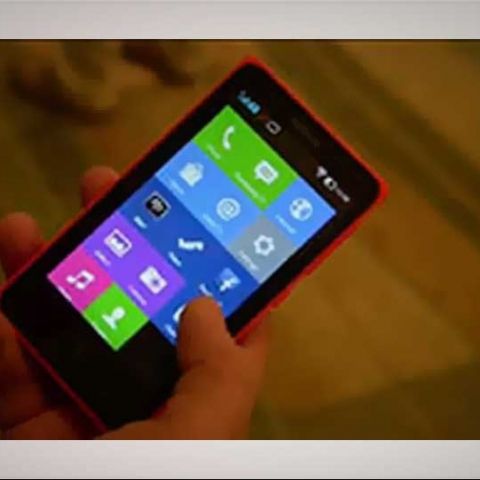 The first Android based smartphone from Nokia has the ability to run android apps, but there are several caveats.

Nokia launched Nokia X, the first of the family of affordable phones from Nokia that can run Android apps, in India at a press conference in Mumbai today. The phone is priced at an MRP of Rs.8,599. While Nokia has said that the smartphone will be available starting today, we will likely see the phone in stores from March 15.

UI and interface
Nokia X comes with Fastlane, a screen which gathers a whole sundry of updates and apps which you’ve recently used. Swiping to the left brings up this screen and it lets users switch between their favorite apps quite smoothly. Long pressing the back button on the front takes you back to the home screen. The home screen is pretty much like the standard Windows Phone home screen and lets you rearrange tiles. Scrolling vertically on the home screen lets you find all your apps. This screen will get pretty long and cumbersome as you install more and more apps, unless of course there’s a way to organize them or maybe a phone-wide search function becomes available once you cross a certain number of apps as in Windows Phone.

Touch response
The UI isn’t very slick and there were a few moments when it lagged or didn’t register a tap. The Fastlane feature might get a bit overwhelming and the one and only home screen might get cluttered eventually. A couple of apps took a little longer than expected to open. The screen feels a little rough to touch (almost like a resistive screen of yesteryears) perhaps because of the millisecond lag. The UI is even more laggy than the ages older HTC Radar we’d used a couple of years ago. The phone feels extremely comfortable when it comes to weight and size.

The apps
The phone gives access to curated, quality-tested apps from Nokia Store, and more than a dozen third-party app stores for downloading apps from the wild. The phone can also sideload .apk files. An important point to note here is that, among these side-loaded apps (even from the free third party stores), about 1 in every 4, which uses any Google APIs, may not work properly. To get over this niggle, Nokia claims to be working with developers from all over the world to port apps using the Nokia X app analyzer. At the press conference Mr.Viral Oza, Director Marketing, Nokia India, informed audiences that this process of porting is a “few hours job in most cases”. The phone comes pre-loaded with a few popular third-party apps and games such as BlackBerry Messenger, Twitter, Facebook, Plants vs. Zombies, etc. Out of the box, consumers get access to HERE Maps which supports turn-by-turn navigation and Nokia MixRadio which can stream music for free and download offline mixes as well. The Nokia X tightly integrates with Microsoft’s services such as OneDrive (previously SkyDrive). Users get access to the default 7GB free cloud storage as well as an additional 3GB of storage once they enable camera backup.

Build quality
Kudos to Nokia for keeping the indestructible lineage strongly built into the Nokia X. In fact the morning’s proceedings began with one of the Nokia representatives literally throwing the phone onto the stage. And quite hard, we might add. The phone feels rugged in its hard plastic and also features removable back-cover that can be swapped for other covers in the trademark Lumia colours.

The camera
The UI of the camera was fairly easy to use and most people who’ve experienced the Lumia’s UI, will feel right at home. The 3MP camera takes pictures fairly quickly. But if we’re talking in terms of pure specifications, the humble 3MP is a bit of a downer. But we’ll reserve our comments on quality until later when we get the phone for a full review.

The other nitty-grities
In terms of specifications, the Nokia X features a 4-inch scratch proof display and runs on a dual-core Snapdragon processor clocked at 1GHz. The phone is 10.4 mm thin and features a 3MP fixed focus camera. The dual-SIM feature is a welcome feature in India. The 1500 mAh battery is removable and the phone also features a memory card slot expandable up to 32 GB.

Watch the video of our hands-on with the Nokia X below: