Moto has launched two budget smartphones recently, upgrading its Moto E and bringing the most affordable Moto G to the market in a short span. Upon first glance, you can easily mistake one for the other, but once you look closely, you will notice the differences. While both are of nearly the same body size, and use the same chassis, the Moto G4 Play’s back panel feels more refined to hold. There are a number of such differences, which is what makes these two Moto smartphones interesting to compare. Which one should you go for? Here’s everything you would need to know, in our detailed comparison between the Moto G4 Play and Moto E3 Power.

To be fair, both look very similar, and although I quite like how it looks against the arsenal of today’s metal-clad phones, not everyone will feel the same. The Moto G4 Play and Moto E3 Power look a bit too simple, and in comparison, the likes of Xiaomi Redmi 3s Prime look more engaging to the young user.

Where the Moto phones appeal is also in simplicity of looks and usage convenience, and fans of simple, hassle-free phones will like this. In terms of build quality, both the phones use the same chassis, and the placements of removable battery flap ridge, microUSB port, audio port and buttons are exactly the same in both. They are also the same in terms of ergonomics. 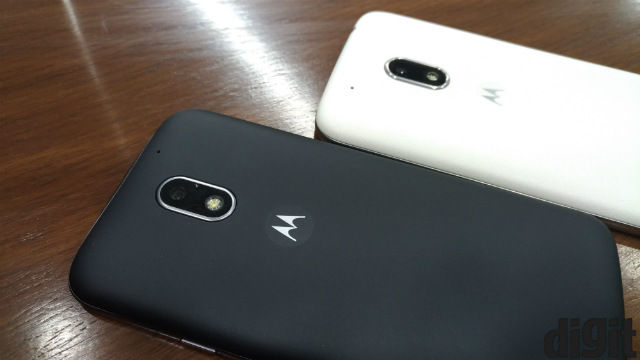 The Moto G4 Play uses a more rigid texture on the plastic back panel, while the Moto E3 Power has a softer texture. This somewhat adds to the grip on the Moto G4 Play, although the difference is minimal.

Both, to sum up, are fairly average in terms of build and design. The Moto G4 Play gets our vote for adding to the grip with its rigid textures, but there’s barely anything else that’s different. The Moto G4 Play weighs 143 grams, while the E3 Power weighs 155 grams. The weight difference is owing to the larger battery pack on the E3 Power, and the G4 Play is also sleeker than the E3 Power as a result, but here too, the difference is not entirely evident unless you go seeking for it.

Both the smartphones house 5-inch HD displays, but the Moto E3 Power houses a brighter display. While the E3 Power delivers 565 lux of peak brightness from its display, the Moto G4 Play measures only 480 lux. The difference is evident, and the G4 Play’s display looks somewhat dull in front of the E3 Power’s display. 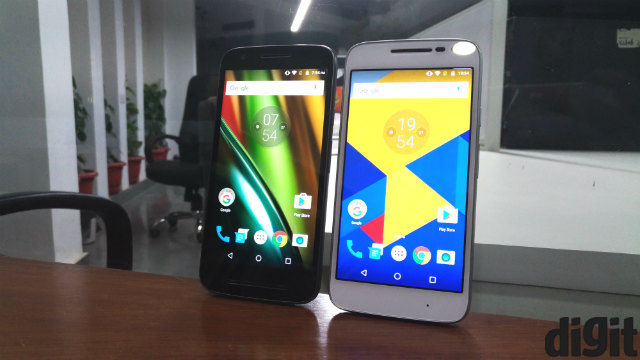 While neither displays are really something to boast of, the E3 Power’s display is fairly well balanced. The colour balance is slightly tuned to the warmer side, and although colours are not really vibrant, there is a pleasant balance to it. Viewing angles are decent, and the only real qualm you would have is that the screen is reflective, which makes sunlight viewing tricky. The Moto G4 Play’s dimness makes sunlight viewing more difficult, and although the colours look similar in terms of accuracy, the vibrancy takes a further hit. The Moto E3 Power, clearly, is the favourable one.

The Moto G4 Play is clearly the better performer here. For the extra grand you pay for it over the Moto E3 Power, you get an old generation Qualcomm processor, the Snapdragon 410. Yet, despite being three years old now, and two years older than the MediaTek MT6735P SoC used on the Moto E3 Power, the G4 Play certainly feels faster, performs relatively better in gaming and heavy tasks, and is more than 15% faster than the Moto E3 Power in benchmark tests.

To be fair, though, this will not have a profound impact on regular usage and daily activities. While the Moto G4 Play does not feel as sluggish as the Moto E3 Power does, for regular applications like Facebook and photo-editing apps like Snapseed, both the devices feel similar in speed. The Moto G4 Play opens apps faster, and switches more seamlessly. When it comes to gaming, it distinctly opens faster, and in-game menus are also easier to navigate. Asphalt 8 on the Moto E3 Power does not really feel playable, while you can still excuse the stutters on the Moto G4 Play, considering its sub-10k pricing.

Unfortunately, neither of these two smartphones are class-leading, and Xiaomi’s Redmi 3s Prime and parent company Lenovo’s Vibe K5 are notably better at performance. It is also important to note that the Vibe K5 is less expensive than both the Moto phones, and the Redmi 3s Prime offers a latest generation SoC, metal body, fingerprint sensor and much better ergonomics at the same price.

The Moto G4 Play is certainly the better performer here, but it is not the best in class. It works for someone who wants a clean Android UI on a smartphone that delivers reliable performance with everyday apps, but for those who expect a more powerful experience from budget devices, these are not the devices to go for.

It is really a question of lesser evils here. Neither of the cameras are really commendable, and here too, the Xiaomi Redmi 3s Prime and Lenovo Vibe K5 shoot notably better photographs. Among the two, however, the G4 Play and E3 Power share the spoils. The Moto G4 Play focuses sharper, and the flat colours leave room for minimal post-processing. The Moto E3 Power is much slower in focussing, which makes it difficult to shoot with. However, it is more consistent with colours and sharpness, and although both the cameras produce ample image noise, the Moto E3 Power seems to handle it slightly better.

The two cameras possibly house the same image sensor, and the difference in output of images is possibly because of slightly varying algorithms. Image quality from both are mighty similar, though. The camera app tilts the camera comparison in favour of the G4 Play, as the app responds faster and smoother than the Moto E3 Power. 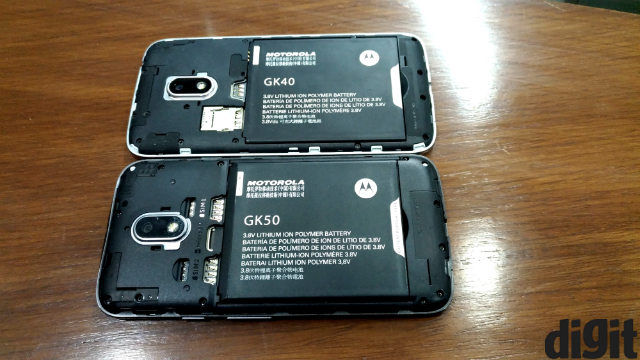 The Moto G4 Plus is certainly the better of the two smartphones, offering a sleeker body and better performance. Battery life is better on the Moto E3 Power, but for Rs. 7,999, you would rather pay a little more for better performance and reasonably alright battery backup. You should ideally spend on the Moto G4 Play, but for any performance enthusiast, the likes of Xiaomi Redmi 3s Prime and Lenovo Vibe K5 seem to be better overall devices.