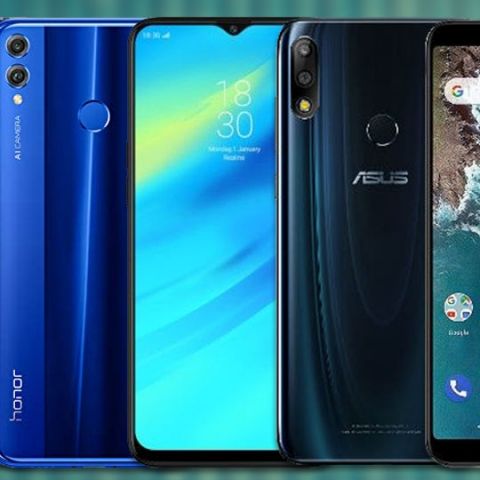 In this comparison, we answer how each smartphone do in terms of performance and battery life. Another article will address the camera performance and the display quality. With that out of the way, let’s begin!

Mid-range smartphones came of age in 2018. While it is already the most popular segment by a long margin in the Indian smartphone market according to multiple reports by market analysts, OEMs ramped up their game big time this year. The spec-sheet game heated up, but the focus was also on the user experience in general. In that regard, we saw a lot of phones with stock Android in the affordable, mid-range segment where earlier that was reserved mostly for the Nexus and Pixel devices. Furthermore, features like 6GB RAM and 128GB storage along with top-of-the-line chipsets came into play, causing disruption in the mid-range space. 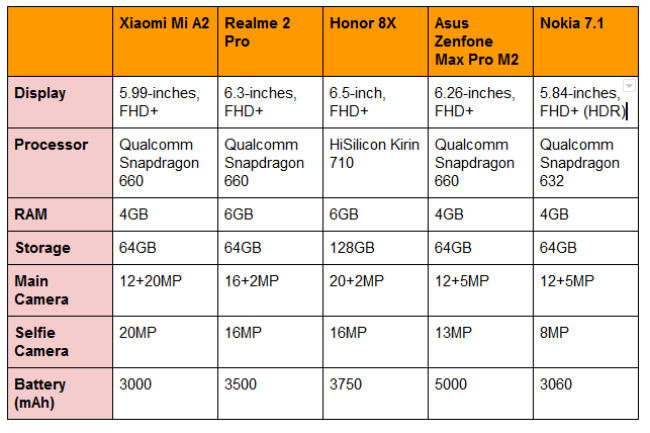 For your annual mid-range smartphone comparison, we pit the top 5 mid-rangers that scored the highest in our test sheets, to see which is the best of the best when it comes to pure performance. While you can pick any of the smartphones in this comparison and have a fairly smooth experience, not all phones are created equal. Some are good for gaming while some take vibrant low-light shots. In this comparison, we answer how each smartphone does in terms of performance and battery life. Another article will address the camera performance and the display quality. With that out of the way, let’s begin!

The best mid-range smartphones to have launched this year were mostly powered by the top-end Qualcomm Snapdragon 660 SoC, save for the Honor 8X that has the new Kirin 710 processor under the hood. The benchmark results for performance, as a result, were quite close. But it’s the slight difference in the scores that gives an insight into which mid-ranger is a better performer. While we use around 5 separate benchmark tests to gauge performance, we will restrict our comparison to three primary tests for a simplified approach. 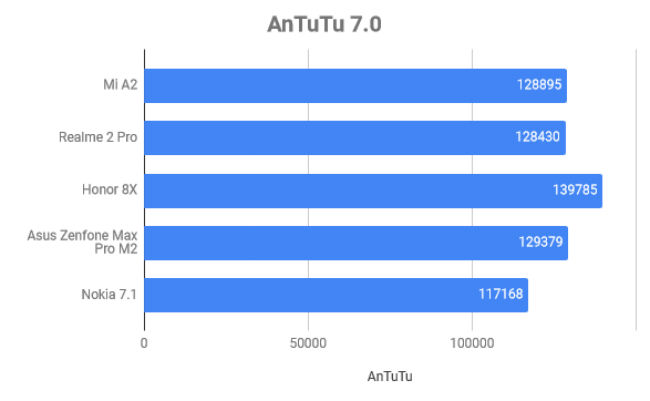 We took scores from AnTuTu, Geekbench and 3DMark Slingshot to gauge synthetic performance. On AnTuTu, the Honor 8X scored the highest at 139785 followed by the Asus Zenfone Max Pro M2 and the Realme 2 Pro. The rest of the phones also cross the 120000 mark save for the Nokia 7.1 for the underpowered Snapdragon 636 SoC that powers it.

It’s clear from this result that the Kirin 710 in the Honor 8X is more powerful than the Snapdragon 660 in the other mid-rangers, by just about 7 percent though. The Kirin 710 is based on a 12nm manufacturing process and features four Cortex A73 and four Cortex A53 cores with a peak clock speed of 2.2GHz. On the other hand, the Snapdragon 660, which was introduced in the mid-range segment later in the year starting with the Realme 2 Pro features 8 Kryo 260 cores, also clocked at 2.2GHz. The reason for the higher score, as is apparent, is the smaller process node the Kirin chip is made on. 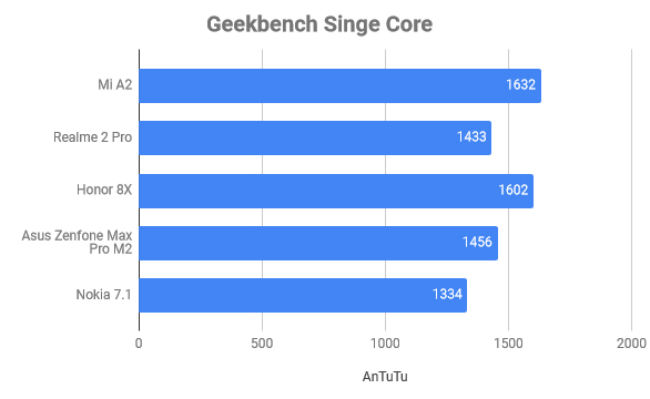 On Geekbench Single Core test, the Mi A2, surprisingly scored the highest. Geekbench’s CPU tests also take into account the memory latency and performs a lot of real-life tests like HDR processing, ray-tracing, gaussian blur, face recognition and more. In that regard, the Mi A2 was the most powerful perhaps for its vanilla Android One flavour with good optimisation. Only the Honor 8X came close, while the rest, even though powered mostly by the Snapdragon 660 scored barely crossed the 1400 mark. 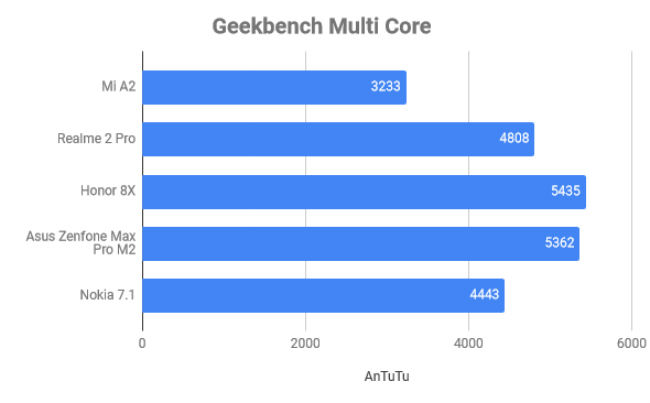 On the multi-core test though, the story was entirely different. It was the Honor 8X that came out on top indicating that multi-threaded performance is better on Honor’s big-screen mid-ranger. This was followed by the Asus Zenfone Max M2 while the Mi A2 scored the lowest. Multi-threaded performance comes into play in heavy-duty apps like Lightroom Mobile, Photoshop Express and VLC and MX Player for playing hi-res videos and the likes. Most apps that we use daily like Facebook, Instagram and the likes rely on a single core, and in that case,  higher single-core performance means the phone is relatively a better performer. 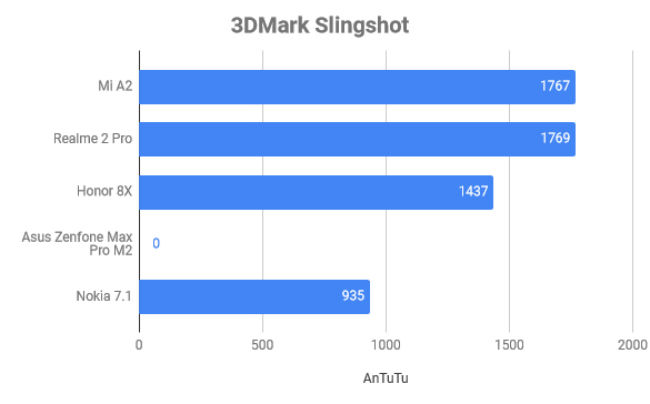 Finally, on 3DMark Slingshot which measures graphics performance, the Realme 2 Pro came out on top. While the Adreno 512 is the same in most of the devices in this list, the Realme 2 Pro seems to eke out a little more than the rest. Point to note here is that we found the Realme 2 Pro to be cheating on benchmark apps by artificially boosting the CPU clock to maximum all the time, despite a lower load on the CPU. If we discount the phone as a result, the Mi A2 is the best phone for graphics.

Benchmark apps reveal only part of the story. Since they are all based on standardised tests, the benchmarks aren’t the end all and be all. Gaming, in fact, is a good indicator of performance and in that regard, it’s the Asus Zenfone Max Pro M2 that handles heavy-duty titles like Asphalt 9 and PubG Mobile without a hitch. It’s not that the other phones aren’t good enough, but the Max Pro M2 offers the smoothest gameplay. In PubG Mobile, the FPS ranged around 25-30 FPS but the Max Pro M2’s stability was the highest. This was followed by Honor 8X primarily for its implementation of GPU Turbo. The Nokia 7.1, which runs on a lower Snapdragon 636, is actually a better device to play the game for its HDR-enabled display. It makes the experience a lot better by making the visuals look richer.
Winner: Realme 2 Pro

As for realtime usage, it’s the stock-Android phones that fared better. Phones on custom ROMs like EMUI (Honor 8X) and ColorOS (Realme 2 Pro) were packed with more features, but they weren’t as smooth as Android-One certified phones like the Mi A2 and Nokia 7.1. Phones with custom ROMs had occasional app crashes. The lack of an app drawer also irked us, but the fact that the Honor 8X comes with a better night-mode and better notch adaptability was impressive. All the phones, including the Nokia 7.1 which is a tad underpowered as compared to the rest, performed well-enough in handling real-world tasks like browsing social media, shooting photos and taking calls. The stock Android phones were more responsive in terms of app launches but the phones with custom ROMs weren’t far behind. Moreover, the Honor 8X and the Realme 2 Pro, or any other Xiaomi or Honor device for that matter, offered a lot more in terms of customisations that were different. 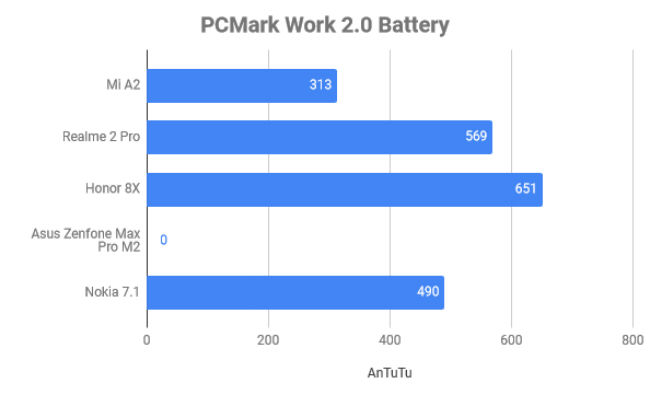 A big part of making a good smartphone great is the battery life. After all, a dead phone is as good as a cold piece of glass. In that regard, it’s the Honor 8X again that proved to be the winner. With a screen-on-time of 651 minutes on PCMark Work 2.0 Battery test, it topped the chart followed closely by the Realme 2 Pro. Unfortunately, the Asus Zenfone Max Pro M2 failed to run the benchmark test so we don’t have conclusive data on the device. But it does hold a lot of charge in its 5,000mAh battery that easily converts to over a day’s usage.

We also tested the battery life by running Google Maps navigation for an hour as well as keep the phone idle over night for 6 hours. In both cases, the Honor 8X lost the least amount of battery. After the test, the Honor 8X had 97 percent and 98 percent charge left respectively.

Interestingly, the phone with the worst battery life is the Mi A2. With only a 3,000mAh battery, it failed to last even six hours on the PCMark battery test, while on real-world tests, we registered big drops in battery life as well. As a result, despite having commendable performance, you will have to plug the Mi A2 in for charging more times in a day.

Looking at the performance and battery life, the best mid-range smartphone to buy right now is the Honor 8X. While it’s custom EMUI may not be everyone’s cup of tea, but it’s superior performance in the synthetic benchmarks and long battery life sets it apart from the rest. The Mi A2 is also a good enough performer and so is the Realme 2 Pro, but while Realme’s halo device had the second best battery life, the Mi A2’s battery performance was abysmal. The Nokia 7.1 falls behind the competition but there are more to the device that meets the eye, primarily in the display and the camera department. The winner in this round of comparison is the Honor 8X.