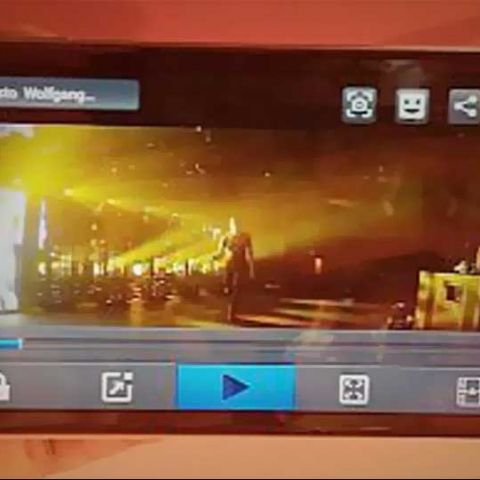 Micromax today announced the Canvas 4 smartphone. The device will be available to consumers this weekend for Rs. 17,999. We had some hands on time with the Canvas 4 at the launch event. Here are our first impressions of the smartphone.

The specifications of the Micromax Canvas 4 are pretty much what we expected of the device. It has a 5-inch IPS display with a 1280x720 pixel resolution. It is powered by a 1.2GHz quad-core CPU, 1GB of RAM and supports 16GB of built-in storage. You can add an additional 32GB of storage via a microSD card. The rear of the smartphone has a 13MP camera and the front has a 5MP camera. A 2000mAh battery powers the entire package. Straight out-of-the-box, the smartphone runs on Android 4.2.1 Jelly Bean. The smartphone boasts of dual-SIM capabilities.

One of the biggest problems with budget smartphones is that they don’t offer an OTA update feature. Micromax says it has addressed this problem with the Canvas 4, which has the ability to receive updates over the air.

Coming to the build of the Canvas 4, we it has changed from its predecessor, the Canvas HD, but not very dramatically. The face of the smartphone looks just like the Canvas HD, while the side of the smartphone has an aluminium finish very reminiscent of the iPhone 4. The rear panel has a plastic finish and at the event, there were two colours on display – white and dark grey. The white one looked a little cheap compared to the dark grey one. The device is still a fingerprint magnet. In terms of the connectivity options, we have the volume rocker to the left, the right has the power button, the top has the headphones jack and the bottom has the microUSB port – fairly standard.

Okay, so the Canvas 4’s hardware hasn’t been upgraded much when compared to the Canvas HD, but Micromax has added a slew of features to the smartphone to justify the Rs. 18,000 price point. To start with, you can blow on the display or shake the phone to unlock it. Before you ask, yes, this feature works. We tried it at the launch event. It looks quite odd, as though you are about to kiss the smartphone but it works nonetheless. Another addition to the functionality of the phone is that you will be able to use the touchscreen while wearing gloves. Whether this works as well as it did on the Lumia 920 is something we will comment on once we have the smartphone in for review.

Apart from adding a number of filters to the Canvas 4’s camera, a few nifty features have been added. You have the usual array of shooting modes and panorama. An interesting thing is that you not only have access to horizontal, but vertical panorama as well. You also have a burst mode with the ability to click 99 images.

One feature that we really liked on Samsung smartphones is the ability to watch a video in “pop out” mode on the display and continue working in the background. This feature has been brought to the Micromax Canvas 4. You can continue watching a video in a small window and check your mail, sent a text or browse the Internet in the background.

Speaking about added features to the regular video playback capabilities, one of the features that NEVER worked for me on the Samsung Galaxy S4 was Smart Pause. Why? Because I wear glasses and the smartphone apparently couldn’t detect my eyes – a frustrating experience. The Canvas 4 has brought this “Smart Pause” feature and I have to say at the event, it worked quite well for me. Every time I looked away from the smartphone, the video would pause. The final verdict of this feature will be given once we have the smartphone in our hands for review.

You also have access to a bunch of gesture controls on the Canvas 4. To start with, you can simply flip the phone on its face if you don’t want to attend a call. Flipping it over during the call switches on the loud speaker. Putting the phone to your ear when a contact is open on the display dials that contact. We have seen these gesture controls before and it is nice to see Micromax implement them on the Canvas 4.

Apart from access to the Google Play store, you have access to a lot of Micromax content such as the M! Zone , M!Live, gaming hub and more.

So, yes, the hardware of the smartphone isn’t really a revolution in the budget space, as we were expecting from the Canvas 4. Does this justify the 18,000-price point? We aren’t sure, but as of now the Canvas 4 feels like old wine in a new bottle. How this fares in the market is something we will comment on once we have reviewed the smartphone.

Just to put things into perspective regarding the specifications of the smartphone, here is a quick specs comparison between the Canvas 4, Karbonn Smart Titanium S9, Samsung Galaxy Grand Quattro and the Xolo X1000.

Realme announces V11s 5G in China: Price, Specifications and features
Redmi Note 11T 5G with Dimensity 810, 50MP dual camera launched in India: Price, specs and availability
OnePlus 9RT to launch as OnePlus RT in India with up to 12GB RAM
Vivo V23e 5G confirmed for November 23 launch, no word on India release
Samsung has rolled out One UI 4 on the Galaxy S21
Advertisements