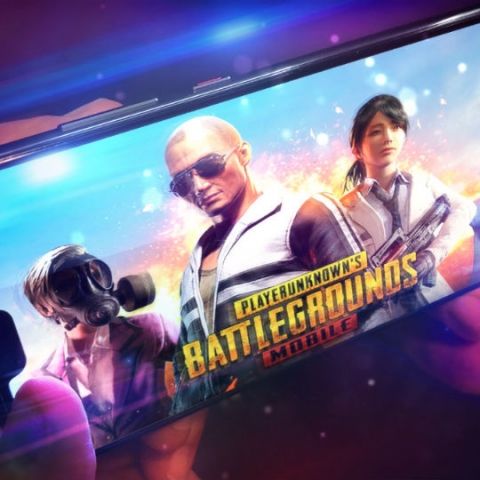 We played PubG Mobile and Asphalt 9 on the Honor Play with GPU Turbo, the Huawei Nova 3 without GPU Turbo and on the OnePlus 6. The results were pleasantly surprising.

With the state of flux the Indian smartphone market is in, smartphones tend to get obsolete too often, too quickly. Hardware under the hood is ever evolving and so are the trending features. If last year was all about taller 18:9 display, 2018 has seen the proliferation of the notch. With so much happening, an older smartphone is well.. Old. But not if Huawei has anything to say about it. In a never before seen move, Huawei announced it has come out with a solution that speeds up the performance of new and old phones alike and even make them more efficient. It’s called GPU Turbo and it’s essentially a software layer on top of the hardware that optimises the GPU while gaming. Huawei claims the technology provides a 60 percent boost in graphics while making the phone 30 percent more efficient while gaming.

That’s a big number associated usually with an upgraded chipset. GPUs in phones doesn’t get the limelight they usually get on PCs, but they’re still quite important in rendering the UI, images, videos and animations on the display. It essentially takes the load off the CPU when there’s a need to crunch hi-res graphics. The difference is quite understandable if you play a game like Modern Combat on an entry-level phone and on a flagship phone. Huawei’s GPU Turbo steps in at this point and tries to offer a similar experience of gaming across price points.

What is GPU Turbo?

The interesting bit to note here is that Huawei has low-level access to the hardware because it designs the chipsets on its own. That allows Huawei to control the finer bits of the hardware behavior like tuning it for specific purposes. The GPU Turbo technology is essentially a tweak in the hardware that enables better and efficient graphics. Instead of installing whole new hardware, Huawei relies on software-enabled acceleration that dramatically increases the performance of the GPU and also makes it more efficient to some extent. Huawei     claims GPU Turbo will allow graphics-intensive games to run at higher frames per second without consuming a lot of battery. Huawei has also managed to bring HDR pictures and haptic feedback to games thanks to the technology.

How does GPU Turbo work?

In essence, a game’s performance is measured in frames per second. The CPU and GPU work together to render every individual frame putting a lot of strain on them. More often than not, the frame is rendering the same image as the previous frame including the same textures and the same details. Huawei realised instead of rendering the whole frame all over agian, it can program the GPU to render only the things that change. This managed to bring down the resources required, allowing a faster frame rendering rate. Furthermore, since the GPU and CPU are only partially rendering the frame, it can make do with lesser cores in use, which essentially increases the efficiency. Thanks to GPU Turbo, Huawei and Honor devices can deliver more frames per second with less resources at hand. While CPU and GPU of other chipsets diligently put in the hard work, GPU Turbo is like that smart kid that knows exactly what’s required.

Is there really a performance upgrade?

I’ll be honest with you guys. When I first heard of the term, I almost brushed it off as yet another AI feature that is more hype and less impact. But when the Honor Play came out with the technology out of the box and I tried a game of PubG on it, the game was noticeably fast. The game is one of the most popular mobile games this year with over 50 million downloads since its launch in December 2017. It’s also one of the few officially optimised to support GPU Turbo. So we decided to perform an in-depth test of just how well Huawei’s tall claims stand.

To make it as objective as possible, we took the Honor Play and the Huawei Nova 3. Both of them are powered by the HiSilicon Kirin 970 SoC coupled with 6GB of RAM. Both phones also have the same GPU — The Mali G72 MP12. That means, the same hardware is used to power the two phones. Only, the Honor Play has GPU Turbo enabled and the Nova 3 doesn’t, yet. That makes them the perfect test subjects. Even the display size is the same, meaning the power draw should be similar in both.

We played PubG Mobile and Asphalt 9 to see whether it’s the new technology that makes gaming smooth on the Honor Play or whether it’s just the chipset in general. Turns out, GPU Turbo actually makes a big difference in gameplay.

Here are the results of a 15 minute PubG session on the Honor Play and the Huawei Nova 3. We cranked the graphics to HDR Ultra Realistic to stress the resources the most. 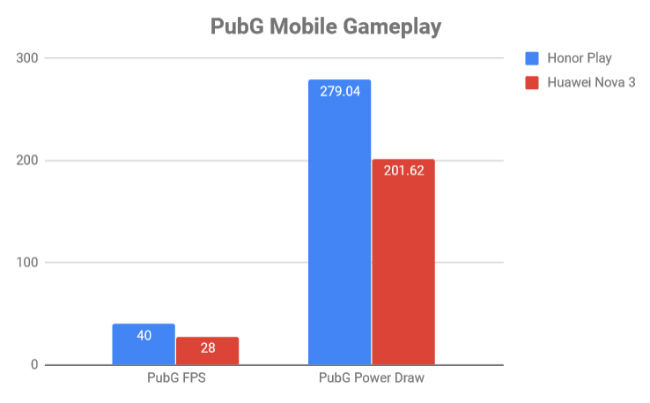 The difference is clearly noticeable. While the Nova 3 maxed out at 28 FPS, the Honor  Play could push it up to 40 FPS. That’s a large improvement and is tangibly noticeable. The Honor Play is also 96 percent stable in handling the game, while the Nova 3 was only 92 percent stable. The variability index on the Honor Play is also lesser, meaning the gameplay is more stable and there’s lesser frame drops as compared to the Nova 3.

Clearly, gaming is more fun on the Honor Play. But is it drawing lesser power? It doesn’t seem so. In the last 15 minute sessions, Gamebench reported a power draw of 279mAh while the Nova 3 drew just 201mAh. It can be argued that it is drawing just 27 percent more power, but delivering 30 percent more performance. It’s up to you, the user to decide whether that’s an acceptable trade-off.

Nevertheless, among two tall claims made by Huawei, only one of the held up in our tests. The frame rate is certainly higher and more stable, meaning the gameplay has certainly improved, but at the cost of more power. Perhaps it requires more testing to provide a normalised output of performance and power draw. We will be testing the phones out even more, and with the GPU Turbo updates tipped to arrive this month on the other Huawei and Honor Phones, we’ll  see whether the Honor Play remains on top. 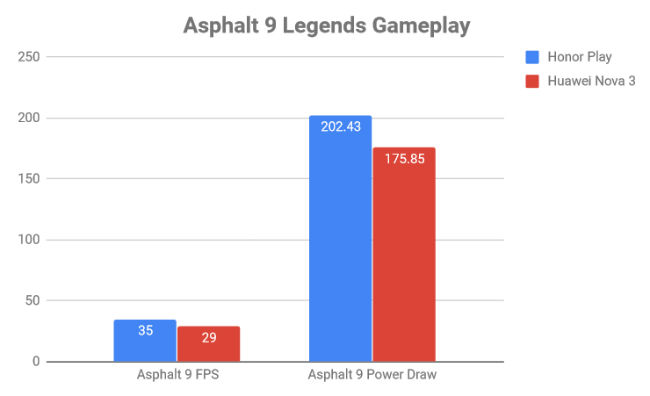 Interestingly, the Honor Play has a better gameplay experience even while playing games not supported by GPU Turbo officially. We played the Asphalt 9 Legends which is hot off the press and isn’t listed in the list of supported games in Huawei’s website. Nevertheless, the Honor Play clocked a median of 35 FPS alongside 202.43mAh power draw, while the Nova 3 managed a 25 FPS with a power draw of 175.85 mAh. That’s a much higher frame rate even though the hardware running the phones are just the same. Huawei’s optimisation is going to breathe new life into old phones and new.

Does that mean Kirin chipsets are now more powerful than Snapdragon chipsets? 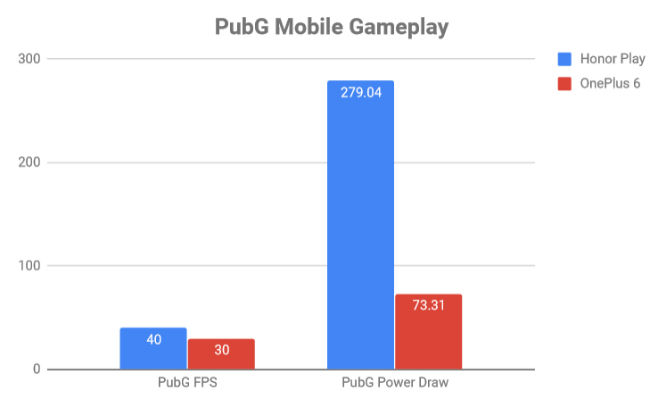 When I played the same games on the OnePlus 6 and the Honor Play, the results doesn’t seem to fall in line with the claims of the respective chip makers. 15 minutes of PubG mobile gave 40 FPS on the Honor Play with 279mAh power draw, while the OnePlus 6 managed 30 FPS with a power draw of 73.31 mAh. The OnePlus 6 also had a higher stability of 98 percent with a variability index of 0.93 FPS. That’s super stable. The Honor Play’s 40 FPS in comparison seems not so consistent which combined with a poor internet connection might convert to less than stellar gameplay experience.

On Asphalt 9 Legends which is not supported by GPU Turbo yet, the Honor Play clocked 35 FPS with a power draw of 202.43mAh mAh. The OnePlus 6 once again maxed out at 30 FPS drawing 89.71 mAh power. Here again, the Kirin 970 outperforms the Snapdragon 845 in terms of gameplay experience,  but only by a hair more. What does that mean for gamers? Well, Huawei’s claim of better gaming experience stands true, most definitely. You get a high frame rate even on games not supported by GPU Turbo.  However, the claim of GPU Turbo making the chipset more efficient didn’t reallly stand true in our case. Like we mentioned before, it will require more testing to produce a normalised distribution of power and performance, but for now, Huawei seems to be racing ahead of Qualcomm despite an inferior hardware on paper.