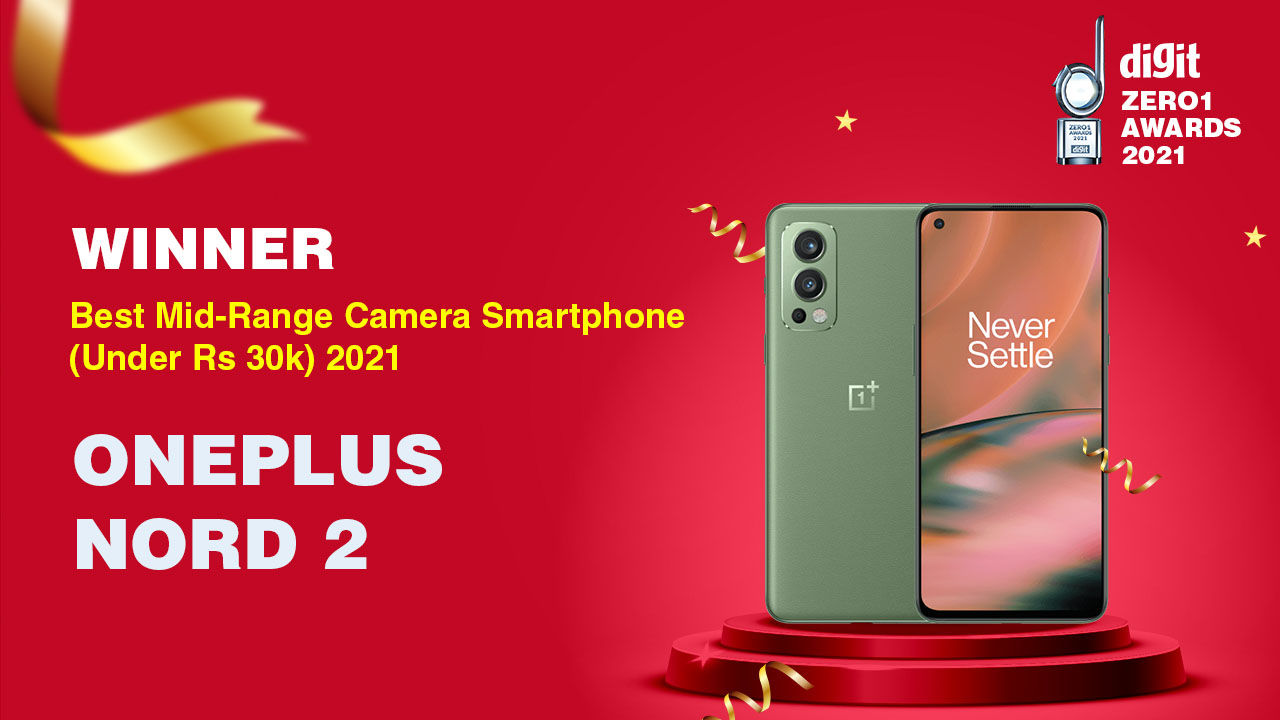 The smartphone industry saw great democratisation in 2021, with technologies previously thought premium now freely available in mid-range and even budget segment phones. This year saw phones under Rs 30,000 significantly up their megapixel count and also focus heavily on tuning their output to provide great photography experiences to users. This year, phones in the segment also brought with them more cameras than ever, with these extra cameras surprisingly performing almost as well as their primary counterparts. While there's still a long way to go for camera phones in this segment, it appears their destination isn't too far away. Or at least, that's what phones we tested in the segment for Digit Zero1 Awards would suggest!

One of the best mid-range phones to have launched this year, Nord 2 from OnePlus is also a very capable camera phone. Apart from impressing in CPU and GPU performance benchmarks, the phone also did very well in our extensive camera tests. Tasked to click photos and videos across various lighting conditions, and with different lenses, the OnePlus Nord 2 scored the highest in our camera tests to beat competing devices like the Redmi Note 10 Pro Max, Oppo Reno 6 and Vivo V21 among others. Lion's share of the credit for this goes to the phone's powerful triple-lens set-up with a primary 50-megapixel lens that comes with support for optical image stabilisation. However, what cannot be ignored is the role of the phone's photography algorithm, and its support for features such as Nightscape Ultra, AI Photo Enhancement, UltraShot HDR and more.

The runner-up in this category is the Oppo Reno 6. The phone finished marginally ahead of the Redmi Note 10 Pro Max, which despite scoring more in the camera department, lost to the Reno 6 because of its lower scores in the CPU and GPU tests. Nonetheless, the Reno 6 is still a very good option even if clicking pictures is your only concern. It comes with the promise of capturing great frames in pretty much all lighting conditions -- especially in low light scenarios where the Reno 6 performed really well. And as we found out during our tests, it also is capable of clicking some really impressive ultrawide and macro shots.

Our pick for the best buy in this segment is none other than the Redmi Note 10 pro max from Xiaomi. As one of the most popular affordable smartphones this year, the Redmi Note 10 Pro Max offers a lot to like. It brings powerful hardware, gorgeous design and also an impressive display. However, where it impresses the most arguably is in the camera department. The Note 10 Pro Max gets a quad lens set-up with a primary 108-megapixel shooter and a very capable 5-megapixel macro lens. And all this at a very aggressive price point, thereby making it a very good value for money for this segment.

With a legacy of 20 years, the Digit Zero 1 Awards is recognized as the Industry’s only performance-based awards. Digit rewards brands for putting in years of research in developing and introducing performance-driven products for their audience. All products are made to pass through a rigorous and scientific test process and compete with competitor brands in the same category. The Winner in each category is announced on the basis of their total score, post complete performance analysis done across an average of 56 tests, conducted for every category, across key performance parameters. The test process for the Zero1 Awards does not consider scores for features, price, or design. The aim is to identify the very best products that money can buy, celebrate the innovations that push the industry forward, and reward the products that dare to disrupt the market.